A bowed Chinese two-string spike fiddle.  The banhu belongs to the huqin family (two-stringed bowed instruments) that descended from bowed lutes from Central and Northern Asia that arrived in China prior to the eleventh century.  The banhu shares many traits with other members of the huqin family, including a wooden resonating chamber, a wooden stick that pierces the chamber, two vertically-strung strings, and a horsehair and bamboo bow that passes between the strings.  However, the banhu is distinct from the rest of the family in that it is spherical, not cylindrical, hexagonal, or octagonal, and its resonating surface is wood, not snakeskin (hence the name: banhu means “board fiddle”).  The banhu’s alternate name of banghu refers to the bangzi (梆子) folk opera of northern China, which frequently employs the banhu.

A Chinese transverse flute. Also known as the di (笛) or hengdi (橫笛), the dizi consists of a length of bamboo with a mouth-hole, six fingerholes, and a hole covered by a thin bamboo or reed membrane (笛膜dimo) that vibrates to give the dizi its volume and unique buzzing sound.  While Chinese transverse flutes existed prior to Han dynasty (206 BC-220 AD), flutes with dimo didn’t appear in Chinese records until the early 12th century. Today, the dizi is the most common Chinese transverse flute and is used in many different settings, including film scores, small ensembles, operas, and orchestras. 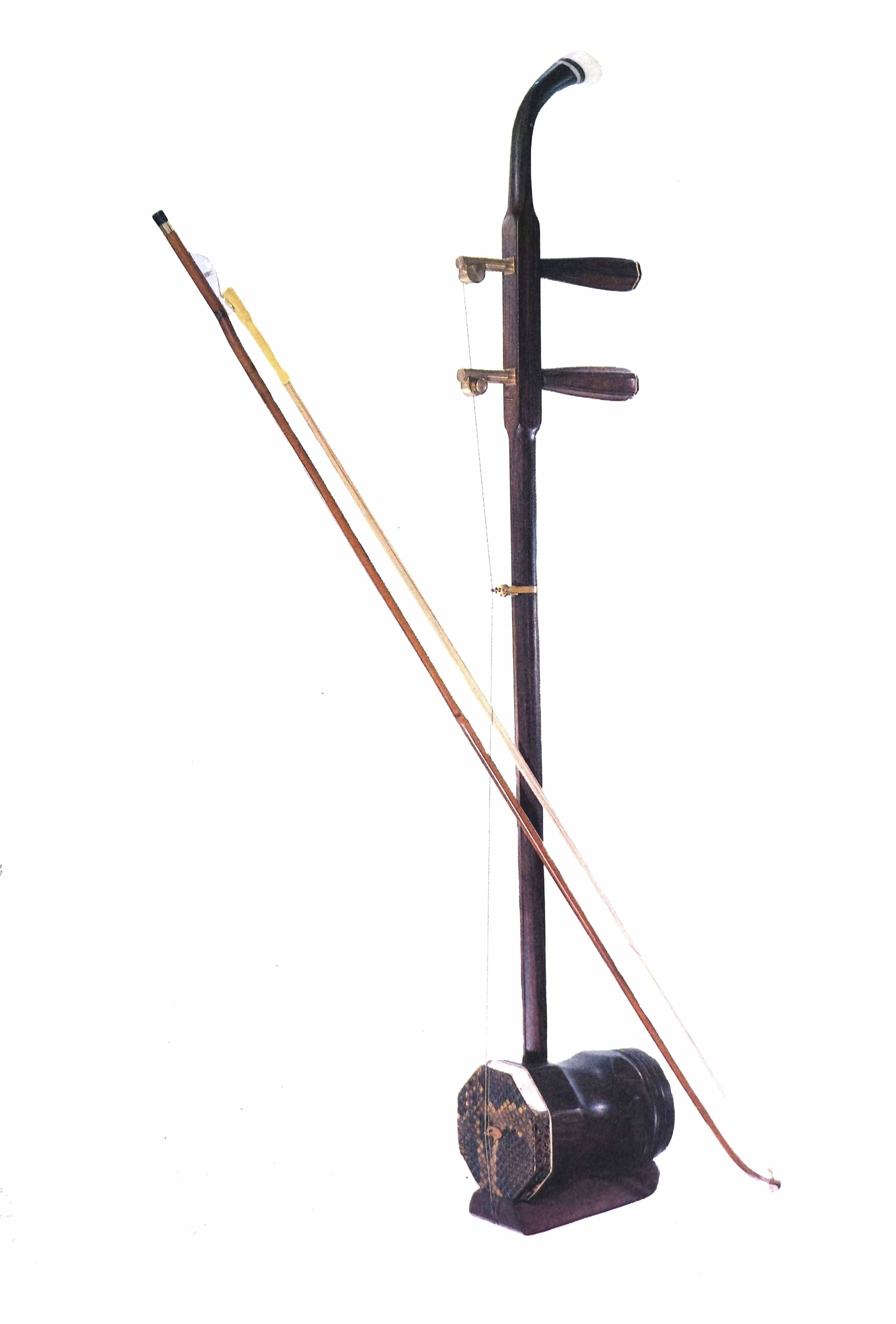 A bowed Chinese two-string spike fiddle. The instrument consists of a wooden resonating chamber with a snakeskin head, a wooden stick that passes through the chamber (hence the term “spike fiddle”) and two metal strings strung vertically along the stick. The bow is made of horsehair and bamboo and placed in between the two strings.  The erhu is the most popular member of the huqin (胡琴 “barbarian string instrument”) family, bowed Chinese instruments descended from bowed lutes (such as the xiqin and mawei huqin) that arrived in China from Northern and Central Asia sometime before the eleventh century.  Historically, the erhu was generally used to accompany vocal music and in small ensembles. Today, the erhu is a virtuosic concert instrument performed in a variety of cross-genre and cross-cultural compositions.

A Chinese free-reed instrument.  Popular among the minority ethnic groups from the Yunnan province in Southwest China, the hulusi is referred to by a different name by each group; the Dai (Thai), for example, call it bilangdao (bilang: “end-blown pipe,” dao: “gourd”). It typically consists of a gourd wind chamber and two bamboo or wooden pipes: a melodic pipe and a drone pipe. Each pipe contains a reed, which can be made of bamboo, bronze, or silver. Normally, the drone pipe is tuned to the fifth. In most modern hulusi, a second drone pipe is added that is either tuned to a different pitch from the first drone or is in unison. The hulusi is mainly characterized by its soft and reedy tones and is traditionally used to accompany dance and personal entertainment. 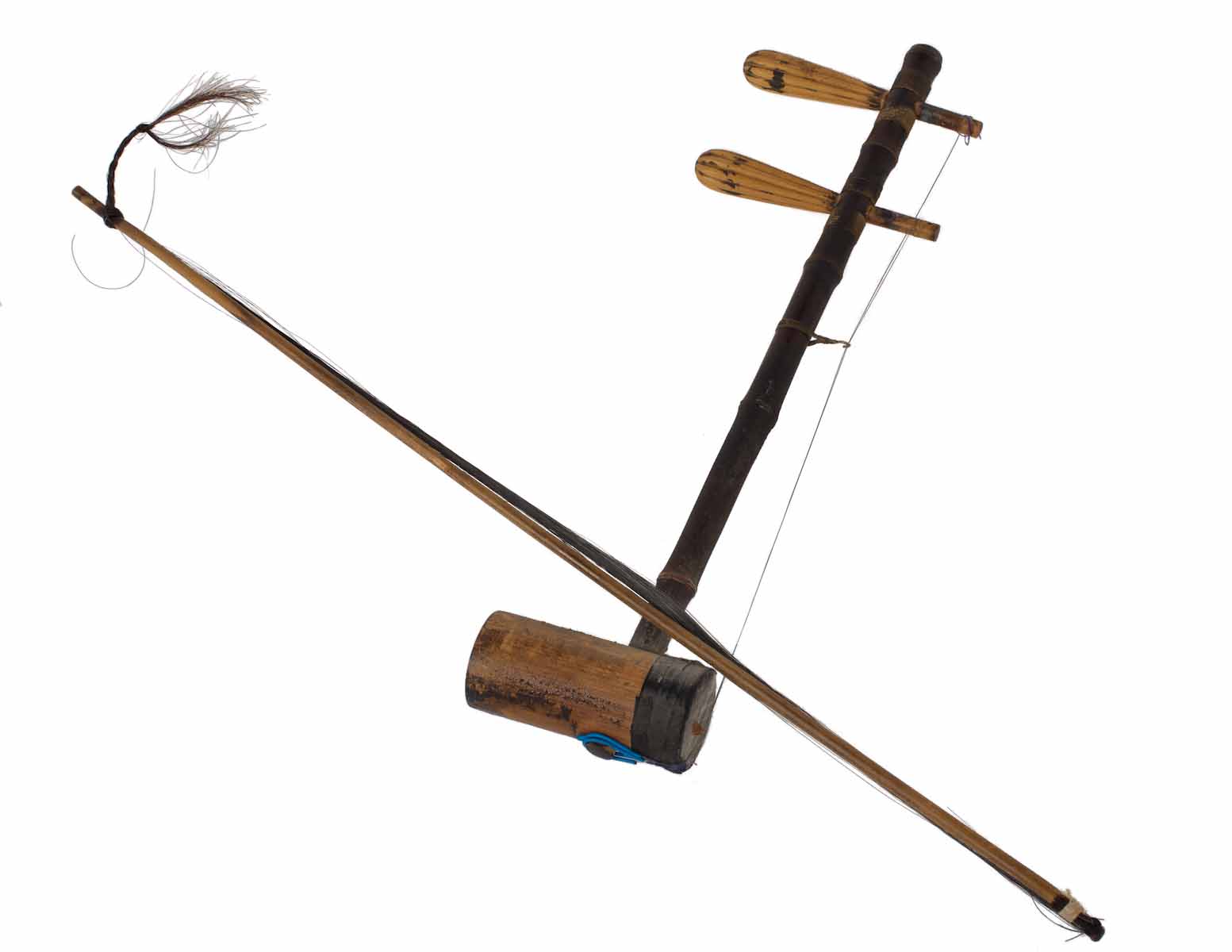 A bowed Chinese two-string spike fiddle.  The smallest in size and highest pitched member of the huqin family (two-stringed bowed instruments), the jinghu consists of a body and neck made of hollowed bamboo, a snakeskin soundboard, two vertically-strung metal strings, and a horsehair and bamboo bow that passes between the strings.  The jinghu almost exclusively serves as an accompaniment instrument in Beijing opera—its name even translates to “huqin used for accompanying Beijing opera.”  Within the operas, the jinghu typically leads the melodic section of the ensemble, performs interludes, and doubles or accompanies a singer’s line. 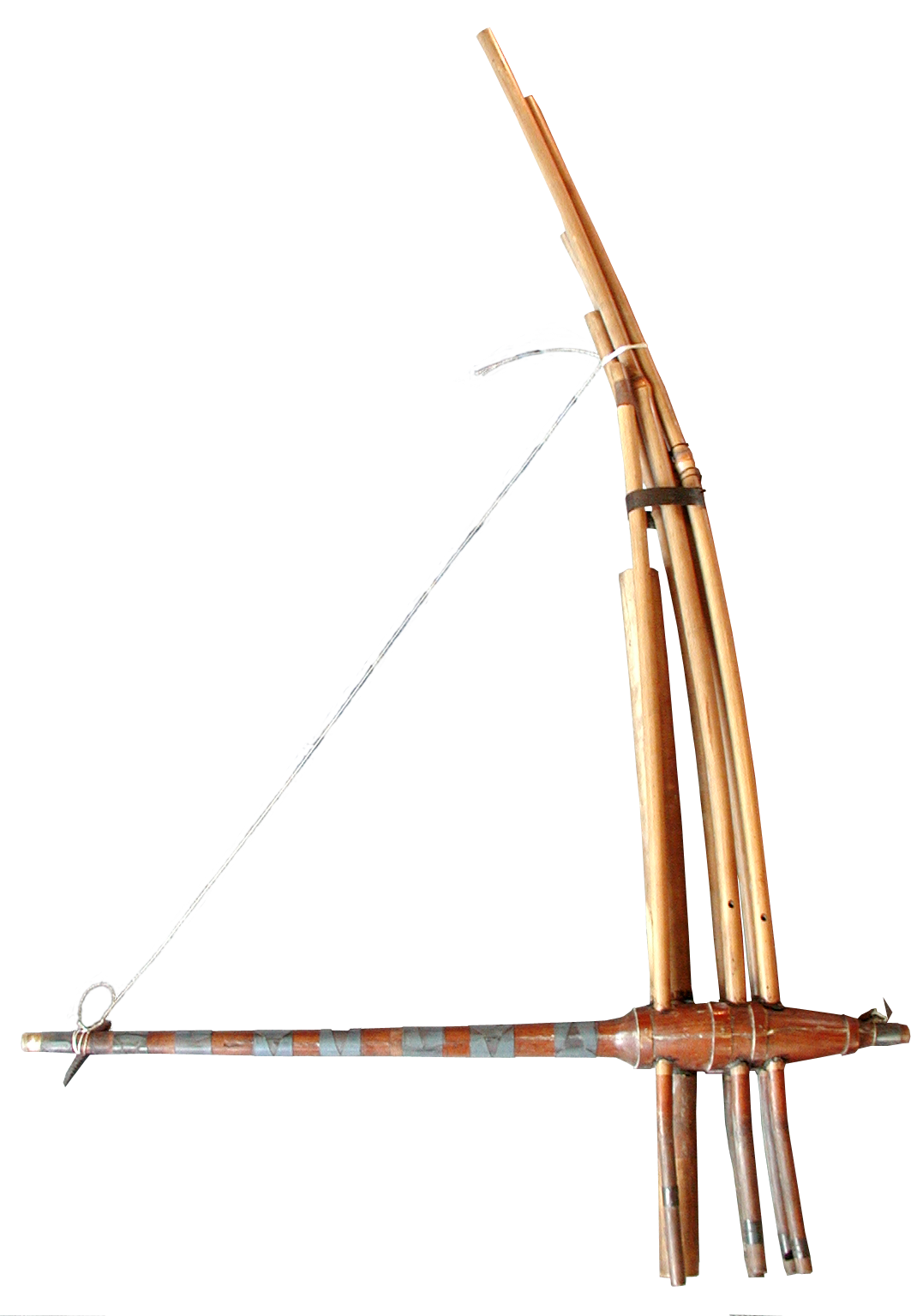 A free-reed mouth organ. Known as the qeej in the Miao community, the lusheng is played by the Miao (Hmong) and Dong (Kam) minority ethnic groups of Southwestern China and Northern South East Asia.  Traditional lusheng consist of a wind-chamber and six slightly-curved pipes, each of which contains a brass reed and passes through the chamber.  Each pipe sounds a different pitch, allowing performers to simultaneously produce a melody, chords, and a drone. Today, traditional lusheng are used as solo instruments or in large lusheng ensembles for ritual ceremonies, courtship, and entertainment, while modified lusheng with more pipes appear in modern orchestral performances.

A bowed Mongolian two-string spike fiddle.  Called matou qin (马头琴, “horsehead instrument”) in Mandarin, the morin khurr (“horsehead fiddle”) consists of a trapezoidal resonating chamber made of wood and, traditionally, a goatskin or sheepskin soundboard, a wooden neck that pierces the resonating chamber and has a horsehead-shaped scroll, and two vertically-strung strings.  Traditionally, the matou qin accompanied daily activities like animal taming and important events like ceremonies, urtiin duu (Mongolian long songs), dances, and the retelling of myths.  The matou qin’s importance was recognized internationally when UNESCO named traditional matou qin music as a Masterpiece of the Oral and Intangible Heritage of Humanity in 2003 and listed the instrument itself on the Representative List of Intangible Heritage of Humanity in 2008.

A pear-shaped Chinese four-string lute.  The pipa has a wooden body with 12 to 26 frets and is plucked with real or artificial fingernails.  Originally from Persia (modern-day Iran), the pipa arrived in China sometime before the Han dynasty and was integrated into court ensembles before becoming a popular solo instrument and important element of various vocal performance genres.  Today, the pipa is primarily performed as a solo instrument and stands as one of the most popular instruments in China.

A round Chinese four-string lute.  Traditionally called the ruanxian (阮咸, after scholar Ruan Xian, credited with its invention), the ruan consists of a round wooden body, a neck with 24 frets, and four vertically-strung strings. Developed during the Han dynasty (206-220 AD), the ruan fell out of favor with the rise in popularity of the pipa (a pear-shaped four-string lute).  Eventually, the development of large ensembles in the twentieth-century brought a renewed interest in the instrument and led to the creation of three main varieties of ruan: the daruan (大阮, “big ruan”), the zhongruan (中阮, “middle ruan”), and the xiaoruan (小阮, “small ruan”).  Today, the daruan and zhongruan are commonly played as supporting instruments in large ensembles, with the zhongruan finding additional popularity as a solo instrument.

A small Chinese vessel flute.  The xun consists of a clay body (usually egg-shaped) with a sound hole and varying numbers of fingerholes.  Dating back to the New Stone Period (ca. 5500-3300 BC), early xun were made with and without fingerholes and in different shapes.  Both ancient court and ritual music employed the xun, but the instrument dropped out of use sometime before the twentieth century, when it was rediscovered at archaeological sites. Today, the xun frequently appears in concert halls and film and television soundtracks, where its unique and airy sound invokes a sense of ages past. 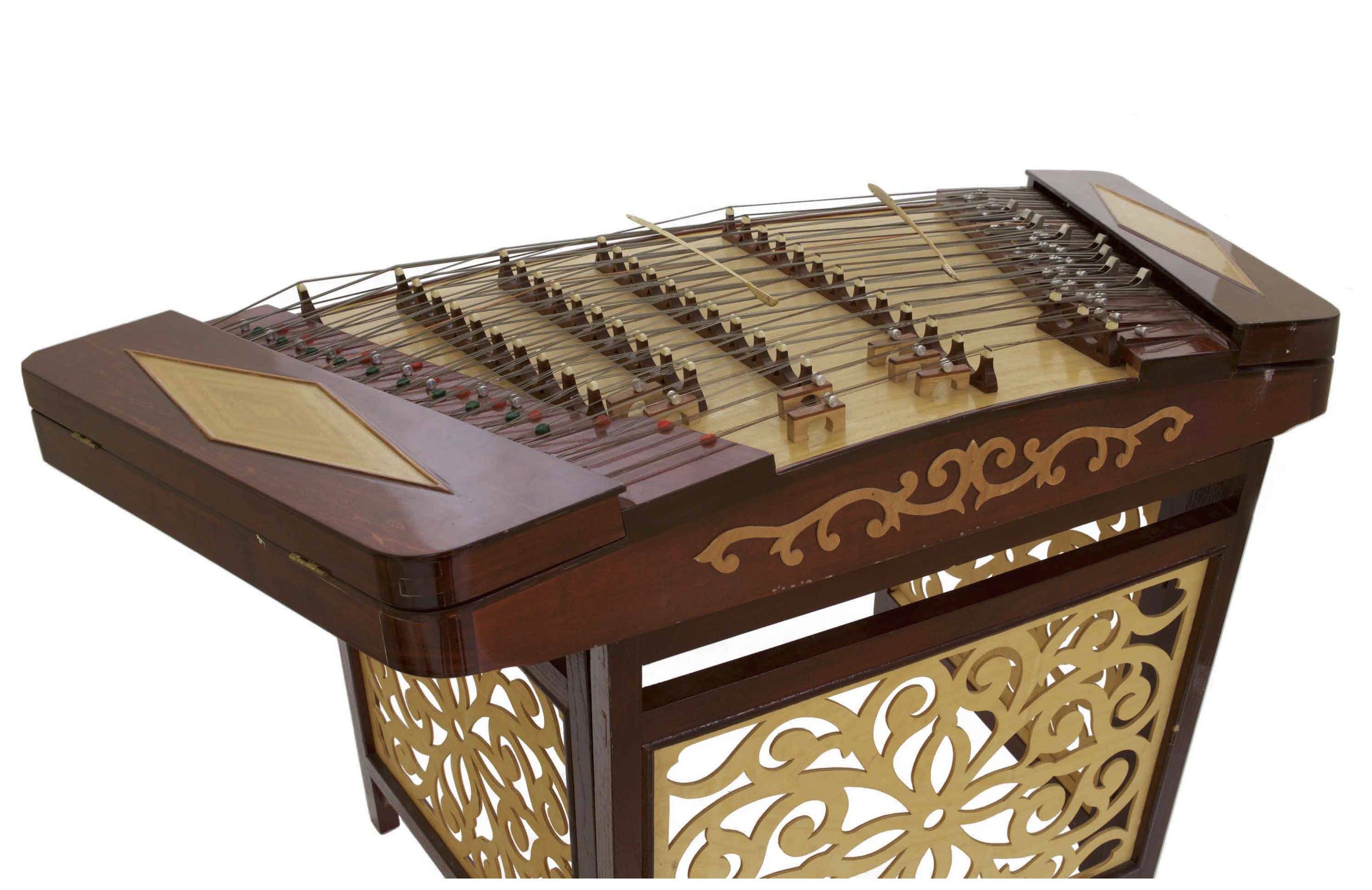 A Chinese hammered dulcimer.  Originally from Persia (modern-day Iran), the yangqin was called the “foreign zither” (yángqin 洋琴) before a change in the first character made it the “acclaimed zither” (揚琴 yángqin).  Today, the yangqin features in many styles of Chinese music, including Jiangnan sizhu, and is known for its wide tonal range and ability to cut through musical textures.  The yangqin is a 144-stringed, chromatic, zither-style instrument played with rubber-tipped bamboo mallets.  The yangqin in this video includes a damper pedal, a modern innovation that allows the performer to control the length of the resonance.

A plucked Chinese long zither.  Also known as the guzheng (古筝 “ancient zither”), the zheng is made of a hardwood soundbox, a wutong (梧桐) wood soundboard, 16 or more strings strung lengthwise across the soundboard, and a series of moveable wooden tuning bridges (one bridge per string).  Traditionally, the zheng is played by plucking the strings with real or artificial fingernails on the right side of the bridge and pressing the strings on the left side of the bridge to manipulate the pitches. The zheng was developed at least 2,500 years ago, rising to prominence during the Qin Dynasty (221-206 BC) and becoming one of the most popular instruments in China by the Tang Dynasty (618-907 AD).  Court musicians performed zheng with other instruments at banquets and for general entertainment and gave solo performances for the educated classes.  The zheng repertoire was generally associated with sentiment and romance. Today, the zheng remains one of the most popular Chinese instruments and, while it is used in some chamber ensembles, generally appears in solo settings. 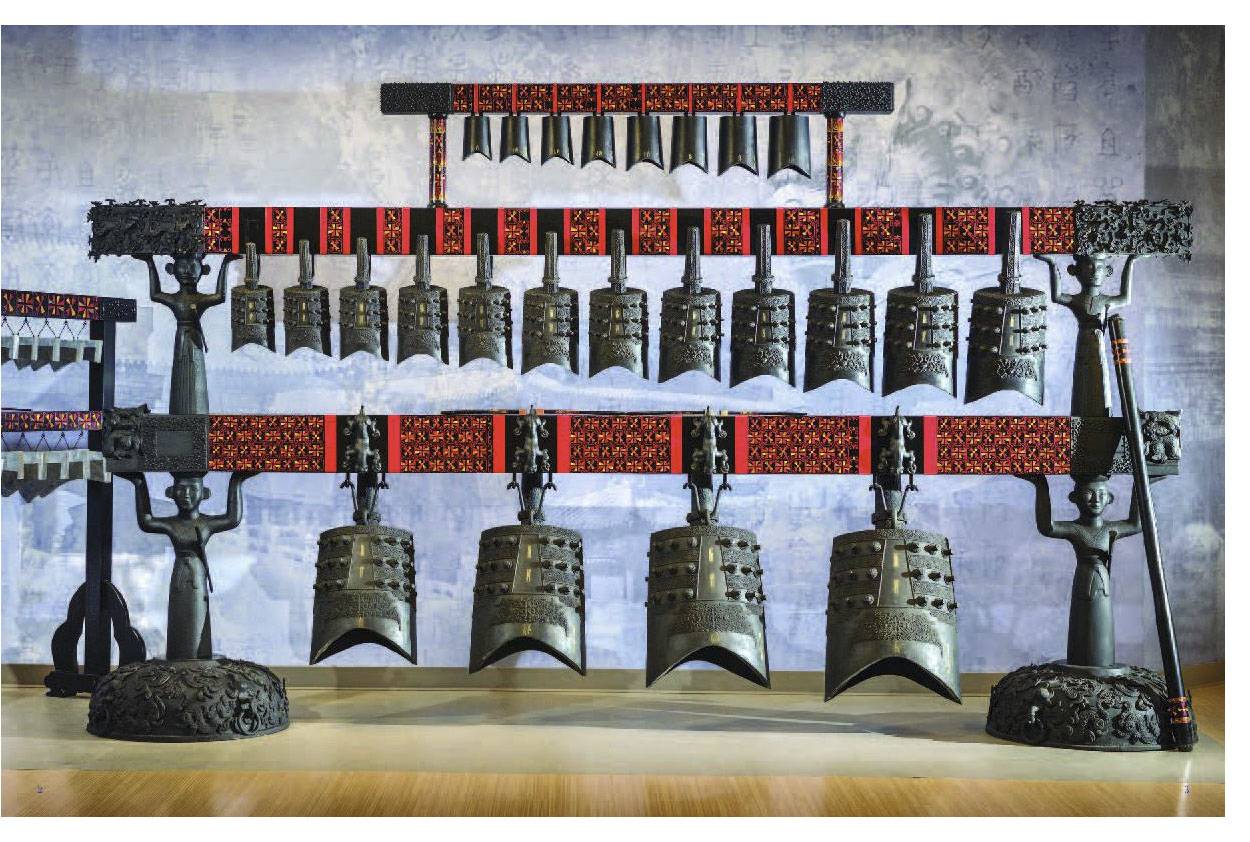 A set of Chinese bronze bells.  Also known as bianzhong (编钟, “chime bells”), the zhong consist of bells hung in a wooden frame and struck with mallets or a long pole.  Each bell produces two separate pitches a 3rd apart, and each set is tuned chromatically.  Multiple performers can play multiple bells at the same time, allowing for complex, multi-line works.  Sets of zhong have been found that date back at least 2,500 years and, especially when paired with bianqing (stone chimes), featured prominently in ancient ritual and court music. The set pictured here is based on the 65-piece set found in the tomb of the Marquis of Yi, a ruler buried in 433 BC.