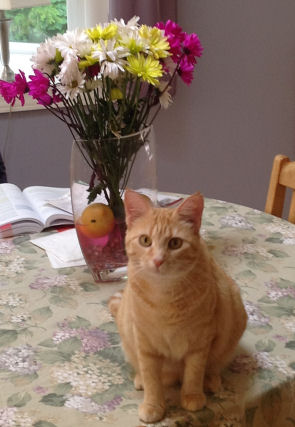 After more than a century (between Sharon and I) of being dyed-in-the-wool dog people, who thought cat-people were sweet, but clearly deranged, we have somehow joined their number. Gypsy showed up at our back porch one September day as I was about to take Blaze on his afternoon walk. I told Sharon that the skinny, feral cat looked hungry and left her to deal with the situation. By the time Blaze and I returned from our constitutional the cat was sitting in an easy chair on the back deck wearing my slippers and sipping on a cold beverage. I intuited, correctly as it turns out, that she was not going to be inclined to leave. Initially Gypsy lived on our screened-in porch and she had the run of the neighbourhood. However, she proved to be a prodigious wildlife killing machine who brought us multiple "gifts" daily--many of them disturbingly headless. We finally decided to promote her to being an indoor cat, a position to which she has adapted admirably. The flowers in the picture above were a gift to us from the local birds, squirrels, chipmunks, and snakes on the day we approved her promotion.

Send me an email at wroberts@mtsu.edu