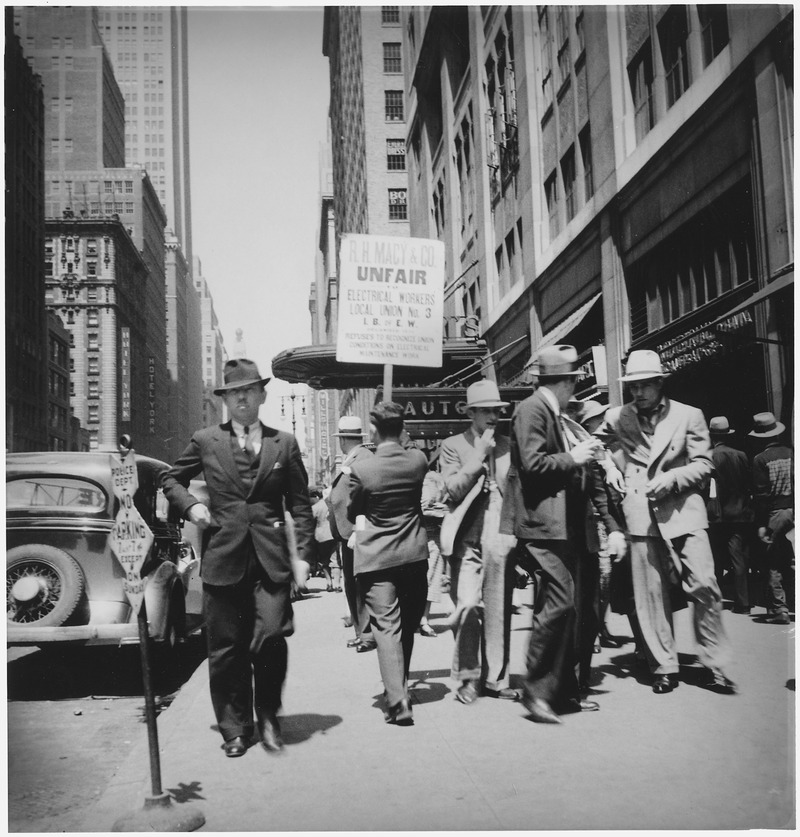 One of the earlier cases where the Supreme Court recognized that an overbroad law suppressed free speech had to do with labor picketing in the 1930s. The court in Thornhill v. Alabama ruled that the Southern state's wholesale ban on labor picketing that outlawed "peaceful and truthful discussion of matters of public interest" and violent actions alike was too broad. The court has continued to recognize the chilling effects of laws that have such sweep that they limit speech protected by the First Amendment. (Photo of union men picketing Macy's in New York City circa 1934 by Dorothea Lange, public domain through the U.S. National Archives and Records Administration)

The Supreme Court implicitly recognized overbreadth in two 1940 decisions. In Thornhill v. Alabama (1940), the Court overturned the application of a wholesale ban on labor that outlawed “peaceful and truthful discussion of matters of public interest” and violent actions alike. In Cantwell v. Connecticut (1940), the Court held that a “breach of the peace” statute could not be broadly construed to “suppress free communication of views, religious or other, under the guise of conserving desirable conditions.” However, in both cases the Court refrained from invalidating the statute in question, calling instead for a limiting construction of its applications.

One of the essential characteristics of contemporary overbreadth doctrine that the Court emphasized in Broadrick v. Oklahoma (1973) is that it is “manifestly strong medicine,” to be employed “sparingly and only as a last resort,” and not in situations in which “a limiting construction has been or could be placed on the challenged statute.”

A second characteristic of the doctrine is that a regulation’s overbreadth “must be not only real, but substantial as well, judged in relation to the statute’s plainly legitimate sweep.” This determination entails balancing the potential harm to society when unprotected speech goes unpunished against the societal implications of silencing communicators. As the Court ruled in Gooding v. Wilson (1972), these implications include leaving grievances to fester and foisting the “chilling effects” of regulation upon those whose speech is protected by the Constitution.

Precisely because of these chilling effects, the overbreadth doctrine permits those to whom the law constitutionally may be applied to argue that it would be unconstitutional as applied to others. This doctrine constitutes an exception to the traditional third-party standing rule. However, in a series of recent cases, including Hill v. Colorado (2000), the Supreme Court implied that only parties whose speech is unprotected may facially challenge regulations on overbreadth grounds, a development that would alter the historical development of overbreadth doctrine.

Overbreadth doctrine is a chief tool of constitutional litigators

The overbreadth doctrine remains a chief tool of constitutional litigators in First Amendment cases.he U.S. Supreme Court continues to invalidate laws based on the overbreadth doctrine. For example, the Court invalidated a law that criminalized lying about earning military honors, called the Stolen Valor Act, in United States v. Alvarez (2012). Similarly, the Court struck down a federal law that criminalized the dissemination of materials depicting animal cruelty in United States v. Stevens (2010). The Court reasoned the law was overbroad, because it could be applied to hunting videos.

This article was originally published in 2009 and updated in 2017. Richard A. “Tony” Parker is an Emeritus Professor of Speech Communication at Northern Arizona University. He is the editor of Speech on Trial: Communication Perspectives On Landmark Supreme Court Decisions which received the Franklyn S. Haiman Award for Distinguished Scholarship in Freedom of Expression from the National Communication Association in 1994.