By Ruth Ann Strickland
Other articles in Legal Terms and Concepts Related to Speech, Press, Assembly, or Petition 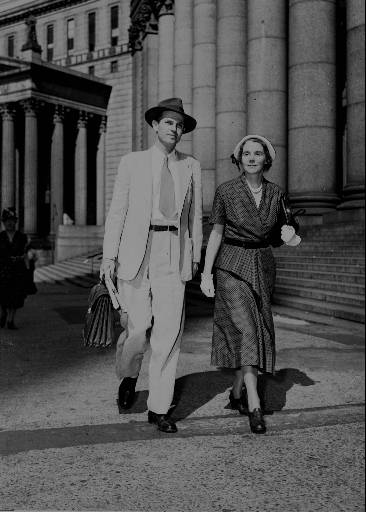 Under federal law, perjury is committed when a person “knowingly” attests to or subscribes to statements he or she does not believe are true. Perjured testimony is not protected by the First Amendment, because it undermines the ability of courts to obtain truthful testimony and to effectively administer justice. Alger Hiss, accompanied by his wife Priscilla, leaves Federal Courthouse, New York, June 23, 1949 at the conclusion of his testimony in his perjury trial. Hiss appeared on the stand for the first time in the trial and denied that he ever had been a member of the communist party, or a communist sympathizer. Hiss is charged with having perjured himself last December 15 before a Federal Grand Jury investigating subversive activities. (AP Photo, used with permission from the Associated Press)

Under federal law, perjury is committed when a person “knowingly” attests to or subscribes to statements he or she does not believe are true. Perjured testimony is not protected by the First Amendment, because it undermines the ability of courts to obtain truthful testimony and to effectively administer justice.

Perjury charges may be brought against individuals who swear or affirm that they will tell the truth and then lie instead. If, however, witnesses were unaware that the stated facts had changed or were different, they merely supplied mistaken observations rather than perjured testimony.

Under perjury law, not only must the speaker make a false statement, but the statement must be of such magnitude that it influences an official proceeding’s outcome. A false statement given under oath relating to a minor or an immaterial matter is not perjury, even though the statement could be deemed a lie, because perjury law is centered on protecting the credibility of official proceedings. Punishing everyone who makes a misstatement would be time-consuming and would not serve the purpose of upholding the integrity of legal processes.

Bronston v. United States (1973) illustrated the complexity of meeting the “false statement” requirement. At issue was whether perjury occurs when witnesses under oath state literal truths but are unresponsive or misleading in response to questions.

In this case, businessman Samuel Bronston was asked whether he currently had bank accounts in Swiss banks; he replied “no.” Then, when asked if he had ever had any bank accounts there, he stated that the company had had an account for six months in Zurich. The literal truth was that Bronston had had a personal Swiss bank account for five years, but Bronston addressed his company’s assets, not his own. Technically his answer to the first question was true because he previously had held a Swiss bank account, but at the time of questioning he did not. Later he was tried and convicted for perjury.

However, in a decision written by Chief Justice Warren Earl Burger, the Supreme Court reversed his conviction, holding that although Bronston may have knowingly misled, his statements were literally true. If a line of questioning is ambiguous, the answers given will not support a perjury conviction. Although Bronston made misleading and evasive statements, this alone is not sufficient to meet the false statement requirement.

A 1998 perjury charge related to the impeachment of President Bill Clinton further demonstrates how difficult it is to justify a perjury prosecution. Experts argue over whether President Clinton perjured himself when testifying before the grand jury about his relationship with former White House intern Monica Lewinsky. The law draws a line between lying and perjury.

Ultimately whether the president had “sexual relations” with Lewinsky became the center of Paula Jones’s sexual harassment lawsuit against Clinton. Clinton’s denial that he had had “sexual relations” with Lewinsky gave rise to accusations that he lied under oath and obstructed justice. He was ultimately impeached in the U.S. House of Representatives for perjury and obstruction of justice in the Jones case but was not convicted in the U.S. Senate.

Many claim that he was prosecuted for perjury for political reasons and that most citizens would rarely be charged with perjury over matters such as this. The evidence shows, however, that ordinary citizens are prosecuted for “small lies,” and a number have been convicted of perjury for lying about sexual affairs. Still, many high-profile cases demonstrate that prosecuting perjury is not easy because of the legal standards imposed in the Bronston case.