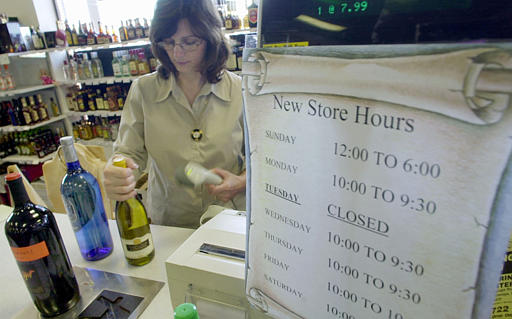 In Two Guys from Harrison-Allentown, Inc. v. McGinley, 366 U.S. 582 (1960)  the Supreme Court ruled that Sunday blue laws did not violate the equal protection clause of the Fourteenth Amendment or the establishment clause of the First Amendment. This photo shows the new Sunday hours of operation clearly posted for customers while Vicky Glamuzina, owner of Georgetown Square Liquors in Williamsville, N.Y., scans bottles of wine Wednesday, May 19, 2004. Nationwide easing of Sunday blue laws allowed more liquor stores to open on Sundays. (AP Photo/David Duprey, used with permission from the Associated Press)

In Two Guys from Harrison-Allentown, Inc. v. McGinley, 366 U.S. 582 (1960), the companion case to McGowan v. Maryland, the Supreme Court ruled that Sunday blue laws did not violate the equal protection clause of the Fourteenth Amendment or the establishment clause of the First Amendment.

In the opinion for the Court, Chief Justice Earl Warren observed that Pennsylvania’s Sunday-closing laws were similar to those of Maryland. The distinction between what the state allowed vendors to sell and what it did not had a rational basis, and the large fines that the law imposed were aimed at large retail businesses that might otherwise choose to pay a smaller fine rather than obey the law.

Warren rejected the argument that the law improperly established religion because “it commemorates the Resurrection, obliges everyone to honor this basic doctrine of the major Christian denominations by abstaining from work and encourages Christian religious worship.” Acknowledging that the original Pennsylvania laws on the subject had this purpose, he accepted the state’s contention that the laws being enforced had secular rationales. He attributed remnants of earlier language — references to “Sabbath Day” and the like — to “legislative oversight in failing to remove them.” Establishing a day of rest for the general population remained a valid secular purpose. Justices Felix Frankfurter and John Marshall Harlan II cited their concurrence in McGowan, and William O. Douglas referenced his dissent in that case.