By John O. Omachonu
Other articles in Legal Terms and Concepts Related to Speech, Press, Assembly, or Petition 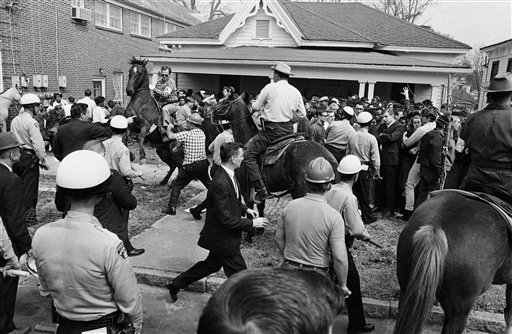 The Supreme Court has reinforced the theory of the First Amendment as a "safety valve," reasoning that citizens who are free to to express displeasure against government through peaceful protest will be deterred from undertaking violent means. The boundary between what is peaceful and what is violent is not always clear. For example, in this 1965 photo, Alabama State College students participated in a non-violent protest for voter rights when deputies confronted them anyway, breaking up the gathering. (AP Photo/Perry Aycock, used with permission from the Associated Press)

The safety valve theory is a philosophical justification of the utility of protest.

Under the safety valve rationale, citizens are free to make statements concerning controversial societal issues to express their displeasure against government and its policies. In assuming this right, citizens will be deterred from undertaking violent means to draw attention to their causes.

The First Amendment, in safeguarding freedom of speech, religion, peaceable assembly, and a right to petition government, embodies the safety valve theory.

The Supreme Court has reinforced this theory by setting a strong presumption against prior restraint of publication.

Such a presumption was evident in the Court’s decisions in Near v. Minnesota (1931), which struck down a state’s attempt to close down the scurrilous Saturday Press, and in New York Times Co. v. United States (1971), in which the Court lifted an injunction against publication of the Pentagon Papers.

These and other decisions rest on the idea that it is better to allow members of the public to judge ideas for themselves and act accordingly than to have the government act as a censure. The Court has even shown support in cases concerning obscenity or speech that incites violent action. The safety valve theory suggests that such a policy is more likely to lead to civil peace than to civil disruption.

The boundary between what is peaceful and what is violent is not always clear and, in some situations, may be disregarded.

Instances abound where government has intervened to “restore” order by confronting apparently peaceful protests. For example, in the 1960s during the Civil Rights Movement, police in Montgomery, Alabama, sought to quell a series of nonviolent protests by students at the Alabama State College.

The students, all of whom were black, were affirming their civil rights in a peaceful way but were met with force by the Montgomery police. Another example took place at Kent State University in 1970 when the National Guard fired upon students protesting the Vietnam War.

Justice Louis D. Brandeis recognized the potential for the First Amendment to serve as a safety valve in his concurring opinion in Whitney v. California (1927) when he wrote: “fear breeds repression; . . . repression breeds hate; . . . hate menaces stable government; . . . the path of safety lies in the opportunity to discuss freely supposed grievances and proposed remedies; and the fitting remedy for evil counsels is good ones.”

This article was originally published in 2009. John Omachonu, Ph.D., is an educator, broadcast media practitioner, and teacher, who for more than two decades, taught college-level courses in mass media law and ethics. He is committed to the tenets, principles and practices of the First Amendment.