By Audrey Perry
Other articles in Legal Terms and Concepts Related to Speech, Press, Assembly, or Petition 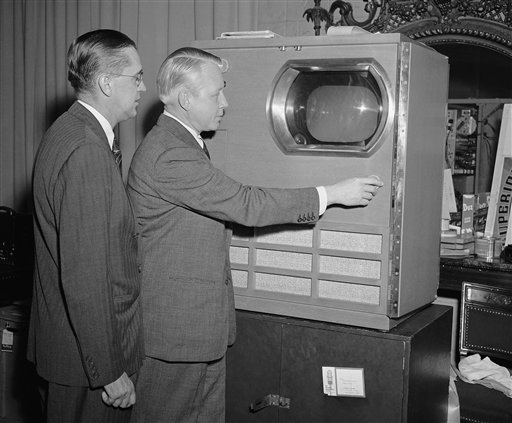 The scarcity rationale is a legal reasoning that supports Federal Communications Commission regulation of traditional broadcasters and was developed during the formative years of U.S. broadcasting. In this photo, Dr. Frank Stanton, right, president of Columbia Broadcasting System, shows the operation of a color television receiver to Wayne Coy, a member of the FCC in Washington in 1949. (AP Photo, used with permission from the Associated Press)

The scarcity rationale is a legal theory that supports government regulation of traditional broadcasters because the broadcast spectrum is limited or scarce. The theory provides for more limited recognition of First Amendment freedoms for broadcasters than for other media. It also has come under heavy criticism.

The scarcity rationale developed during the formative years of U.S. broadcasting. However, the first lengthy explanation of the rationale did not appear until the Supreme Court’s decision in National Broadcasting Co. v. United States (1943).

The Court explained that because the radio spectrum was not wide enough to accommodate everyone who wished to use it, and because the potential existed for spectrum interference, the Federal Communications Commission (FCC) should play a role in “determining the composition of that traffic.”

In addition to determining who could broadcast, the Court found that “because of the scarcity of radio frequencies” the government could place restraints on broadcast licensees to ensure that the views that “should be expressed” were expressed. Red Lion therefore firmly established spectrum scarcity as the constitutional underpinning for both broadcast licensing and broadcast content controls.

Scarcity rationale began to lose relevancy, but not rejected

This article was originally published in 2009. Audrey Perry is a First Amendment, election, and campaign finance law attorney. She has served as counsel to several presidential campaigns. Ms. Perry is of counsel at the Sacramento law firm Bell, McAndrews & Hiltachk and an adjunct professor at Brigham Young University Law School, where she teaches Election Law.