By Kevin Francis O'Neill
Other articles in Legal Terms and Concepts Related to Speech, Press, Assembly, or Petition 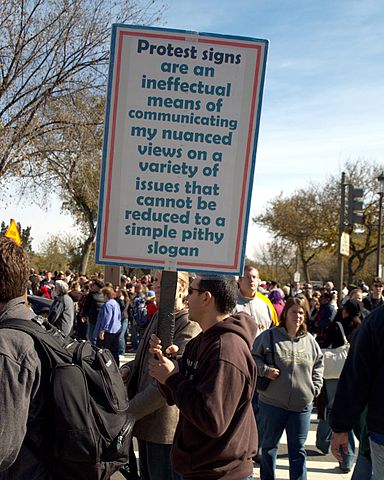 Time, place and manner restrictions are content-neutral limitations imposed by the government on expressive activity. Such restrictions come in many forms, such as imposing limits on the noise level of speech, capping the number of protesters who may occupy a given forum, barring early-morning or late-evening demonstrations, and restricting the size or placement of signs on government property. Such regulations are frequently upheld and represent a common part of the regulatory landscape in most cities and counties. In this photo, a protestor pokes fun at protest signs. Regulations about the size and placement of such signs are content-neutral limitations frequently upheld in courts. (Image via Wikimedia Commons, CC BY 3.0)

Time, place and manner restrictions are content-neutral limitations imposed by the government on expressive activity.

Such restrictions come in many forms, such as

Such regulations or licensing laws that require parade or demonstration permits are frequently upheld and represent a common part of the regulatory landscape in most cities and counties.

Restrictions can survive First Amendment challenge under a 3-prong test

To survive First Amendment constitutional challenges, such restrictions must satisfy a three-prong test outlined by the Supreme Court in Ward v. Rock Against Racism (1989).

Restriction based on subject matter is not content-neutral

The first prong, requiring content neutrality, will be violated by any regulation that describes permissible expression in terms of its subject matter.

Police Department of Chicago v. Mosley (1972) provides an example of a time, place and manner regulation that failed the content-neutrality requirement. In Mosley an ordinance prohibited all picketing within 150 feet of any school building while classes were in session. However, picketing was allowed if the school was involved in a labor dispute.

Mosley does not exemplify the only way that a speech restriction can violate the content-neutrality requirement. Even if the regulation does not, as in Mosley, expressly discriminate on the basis of subject matter, it can run afoul of the content-neutrality requirement if the circumstances surrounding its enactment or the history of its enforcement reveal a governmental intent to favor or punish particular messages.

Speech restrictions will be deemed content neutral, even if they impinge more severely on a particular speaker or message, so long as the government can credibly justify its regulation as serving purposes that have nothing to do with the content of speech.

Regulation must be narrowly tailored to promote substantial government interest

The second prong of Ward’s three-prong test requires that the regulation must be narrowly tailored to serve a significant governmental interest. This narrow tailoring requirement is not nearly as stringent as its language would suggest. The Supreme Court has stressed that this prong does not require time, place, and manner restrictions to be the least restrictive or least intrusive means of achieving the government’s end.

Instead, according to Ward, the requirement of narrow tailoring is satisfied “so long as the . . . regulation promotes a substantial government interest that would be achieved less effectively absent the regulation.”

This relaxed conception of narrow tailoring is vividly reflected in the case law. Regulations that fail this test invariably feature broad restraints on traditional forms of expressive activity — imposing, for example, sweeping prohibitions on parades, demonstrations, residential picketing, door-to-door leafleting, or public hand billing. The narrow tailoring requirement will certainly be violated by a categorical ban on any of the foregoing methods of expressive conduct. So, for example, an ordinance would violate the narrow tailoring requirement by banning parades anywhere within a city’s central business district on all workdays because it would allow parades only when the downtown streets were bereft of onlookers.

Absent a categorical or substantial ban on a traditional method of expressive activity, courts routinely uphold time, place, and manner restrictions as satisfying the requirement of narrow tailoring.

Speaker must have alternative channels of communication

Two different themes run through the cases that construe this requirement. First, the Supreme Court has shown a “special solicitude” for inexpensive methods of communication. Accordingly, a speech restriction may run afoul of this requirement if it precludes forms of expression that are much less expensive than feasible alternatives. Second, the ample alternative channels requirement most commonly arises when a speaker identifies one particular place as uniquely suited to conveying a message, but the government insists that the speaker take up position in an alternative location.

The basic test for gauging the sufficiency of alternative channels is whether the speaker is afforded a forum that is accessible and where the intended audience is expected to pass.

In performing this analysis, a court should take account of the speaker’s intended audience and the extent to which the chosen location contributes to his or her message. A speech restriction does not leave open ample alternative channels if the speaker is left unable to reach the intended audience.

A good example of this is Million Youth March, Inc. v. Safir (S.D.N.Y. 1998), where New York City denied a permit request by the Nation of Islam to hold a massive rally in Harlem, insisting that the rally be held instead on Randall’s Island. Located in the middle of the East River between Manhattan and Queens, Randall’s Island was inaccessible by bus or subway and was virtually uninhabited.

The Nation of Islam brought suit under the First Amendment, challenging the city’s imposition of Randall’s Island as the only permissible site for the rally. In an extensive and instructive three-prong analysis, a federal judge ruled that the city had violated the ample alternative channels requirement.

The court stressed that the Randall’s Island alternative was constitutionally inadequate because it thwarted the plaintiff ’s access to its target audience, the residents of Harlem, and because holding the rally in Harlem was part and parcel of the plaintiff’s message — a message that focused on ways to improve the lives of African Americans.

As the foregoing discussion shows, proper time, place, and manner analysis requires careful attention to each of Ward’s three prongs — and to the particular approach that courts have developed for each of those prongs.

It is important to note that the Ward test governs only time, place, and manner restrictions imposed by legislative bodies.

Judicial injunctions that impose content-neutral time, place, and manner restrictions are subject to a heightened form of intermediate scrutiny. Observing that “[i]njunctions . . . carry greater risks of censorship and discriminatory application than do general ordinances,” the Supreme Court held in Madsen v. Women’s Health Center, Inc. (1994) that appellate courts should subject content-neutral injunctions to more “stringent” First Amendment scrutiny than comparable legislation — that “when evaluating a content-neutral injunction, we think that our standard time, place, and manner analysis is not sufficiently rigorous.”

Announcing a new standard of review for judicially imposed time, place, and manner restrictions, the Court wrote,“[w]e must ask instead whether the challenged provisions of the injunction burden no more speech than necessary to serve a significant government interest.” This effectively converts the second prong of Ward into a least restrictive means requirement.