By Philip A. Dynia
Other articles in Legal Terms and Concepts Related to Speech, Press, Assembly, or Petition 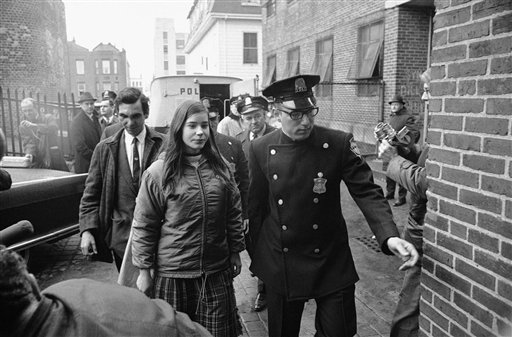 A law that defines a crime in vague terms is likely to raise due-process issues. Courts in the United States give particular scrutiny to vague laws relative to First Amendment issues because of their possible chilling effect on protected rights. Loitering laws are one example of laws that can be unconstitutionally vague. In this photo, Susanne Williams, 17, of Amherst, Mass., in police custody in Boston on March 31, 1966, before she was sentenced to 20 days in jail on charges of “sauntering and loitering.” Miss Williams and ten others participated in an anti-war demonstration on Saturday sponsored by pacifist Committee for Nonviolent Action. (AP Photo/J. Walter Green, used with permission from the Associated Press)

A law that defines a crime in vague terms is likely to raise due-process issues. Courts in the United States give particular scrutiny to vague laws relative to First Amendment issues because of their possible chilling effect on protected rights.

According to the U.S. Supreme Court in Connally v. General Construction Co. (1926), a law is unconstitutionally vague when people “of common intelligence must necessarily guess at its meaning.” Whether or not the law regulates free speech, if it is unduly vague it raises serious problems under the due process guarantee, which is applicable to the federal government by virtue of the Fifth Amendment and to state governments through the Fourteenth Amendment.

Thus, in overturning a California loitering law that required persons who wander or loiter on the streets to provide “credible and reliable” identification in Kolender v. Lawson (1983), the Supreme Court explained that “the void-for-vagueness doctrine requires that a penal statute define the criminal offense with sufficient definiteness that ordinary people can understand what conduct is prohibited and in a manner that does not encourage arbitrary and discriminatory treatment.”

The void-for-vagueness doctrine probably has its roots in the ancient Roman law maxim, Nulla crimen sine lege (no crime without law). English jurist Sir Edward Coke stated that all laws, but especially serious penal laws, “ought to be . . . plainly and perspicuously penned. . . .” A century later Sir William Blackstone in his Commentaries on the English Constitution explained the requirement that every law clearly define and articulate “the right to be observed, and the wrongs to be eschewed. . . .” (Blackstone relates that a man who stole one horse was not penalized under a statute which forbade “stealing horses.”) In France, Montesquieu’s Spirit of the Laws urged that laws be concise, simple, and devoid of “vague expressions.”

These examples undoubtedly were known to early American commentators and jurists, who often reiterated the importance of clarity in criminal statutes. James Madison in Federalist No. 62 warns of the “calamitous” results if laws are “so incoherent that they cannot be understood. . . .” In an early federal court case, United States v. Sharp (1815), the Court argued that laws that “create crimes, ought to be so explicit in themselves, or by reference to some other standard, that all men, subject to their penalties, may know what acts it is their duty to avoid.”

A fundamental explication of the modern Supreme Court’s concerns regarding overly vague statutes is found in Grayned v. City of Rockford (1972). The Court upheld a city ordinance restricting any “noise or diversion” that would disrupt activities at a public school against claims of vagueness. Because Rockford’s ordinance was aimed at disruptive speech and was grounded in the interest of ensuring the order needed for a proper education, the Court found no constitutional violation. But the Court did suggest three reasons why overly vague statutes are unconstitutional.

These last two elements are similar to the reasoning offered by the Court for overbreadth challenges to laws allegedly impinging on First Amendment freedoms. Overbroad statutes allow officials to enforce such laws selectively and in ways that may favor some viewpoints but punish others, and they create a chilling effect by making speakers wary of engaging in First Amendment speech for fear they may subsequently be convicted for violating a statute the speakers did not believe covered their speech. If a First Amendment violation is alleged, a vague law, like one that is overbroad, is susceptible to a facial rather than an as-applied challenge.

The third element of Grayned is particularly important with respect to the First Amendment. The modern Supreme Court has consistently said that the void-for-vagueness doctrine will be applied with extreme strictness where First Amendment freedoms are concerned. As early as 1963, in NAACP v. Button, the Court explained that “[s]tandards of permissible statutory vagueness are strict in the area of free expression. . . . The objectionable quality of vagueness and overbreadth does not depend upon absence of fair notice to a criminally accused or upon unchanneled delegation of legislative powers, but upon the danger of tolerating, in the area of First Amendment freedoms, the existence of a penal statute susceptible of sweeping and improper application.”

Thus, the modern Supreme Court, while retaining the lack of fair notice concern prominent in earlier vagueness cases, has come to stress, as stated in Smith v. Goguen (1974), that “perhaps the most meaningful aspect of the vagueness doctrine is not actual notice but the other principal element of the doctrine — the requirement that a legislature establish minimal guidelines to govern law enforcement.”

The Court reemphasized this position in City of Chicago v. Morales (1999). A Chicago ordinance required gang members to disperse if ordered to do so by a police officer if the officer reasonably believed that at least one person in a group of two or more was a gang member and these individuals were loitering. Failure to do so could lead to imprisonment.

Justice John Paul Stevens stressed the vagueness of the ordinance’s definition of loitering (being in a place for no apparent purpose) as well as the uncertainty of the behavior needed to avoid arrest (if one moves down the block or goes around the block and comes back, has one dispersed?). Most troubling for Justice Stevens was the immense discretion given police officers in determining whom to arrest when. Justice Sandra Day O’Connor stated the fundamental concern (in the Kolender case, cited above) when she warned that if  “the legislature fails to provide . . . minimal guidelines [to govern law enforcement], a criminal statute may permit a standardless sweep that allows policemen, prosecutors and juries to pursue their personal predilections.”