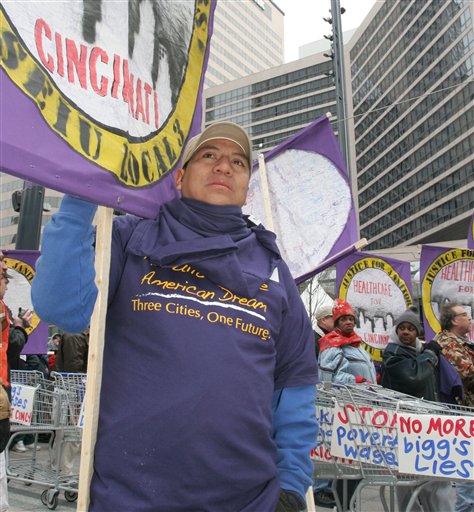 An example of viewpoint discrimination was a Cincinnati ordinance that allowed the city to allow some groups to erect signs and displays on the downtown Fountain Square and exclude others based on their identity and message. The 6th U.S. Circuit Court of Appeals in 1993 invalidated the ordinance as a violation of First Amendment rights. (Photo by Associated Press of Fountain Square in 2007 when it was used for a labor rally, with permission from The Associated Press.)

Because the government is essentially taking sides in a debate when it engages in viewpoint discrimination, the Supreme Court has held viewpoint-based restrictions to be especially offensive to the First Amendment. Such restrictions are treated as presumptively unconstitutional.

In Rosenberger v. Rectors and Visitors of the University of Virginia (1995), the Supreme Court declared: “When the government targets not subject matter but particular views taken by speakers on a subject, the violation of the First Amendment is all the more blatant. Viewpoint discrimination is thus an egregious form of content discrimination. The government must abstain from regulating speech when the specific motivating ideology or the opinion or perspective of the speaker is the rationale for the restriction.”

Examples of laws and regulations found to embody viewpoint discrimination

Boos v. Barry (1988) offers a vivid example of a viewpoint-based regulation. In that case, the Supreme Court struck down a District of Columbia statute that criminalized the display of any sign criticizing a foreign government within five hundred feet of its embassy.

On its face, this statute was viewpoint discriminatory because it singled out one particular perspective — criticism of foreign governments — for suppression.

Viewpoint discrimination is not always written into the text of a speech regulation. More often, it is carried out less visibly — through the exercise of governmental discretion.

A good example is Congregation Lubavitch v. City of Cincinnati (6th Cir. 1993), which dealt with expressive access to Fountain Square, a public square in downtown Cincinnati.

For many years, the city had allowed a broad range of private groups to erect expressive signs and exhibits on the square and to leave them there for short periods of time. But the city was not so agreeable when it was approached, separately and persistently, by a Jewish congregation and the Ku Klux Klan, both of which sought to erect overnight displays on Fountain Square.

Instead of granting these requests, the city quickly enacted a new ordinance that banned all overnight displays on the square, except those sponsored or co-sponsored by the city. Thus the new ordinance gave the city complete freedom to discriminate between favored groups — such as the Kiwanis Club, an Oktoberfest committee, and a librarians’ organization — and disfavored groups — such as the Jewish congregation and the Klan.

Because the city was using its new ordinance to invite or exclude each group based on its identity and message, the city was engaged in viewpoint discrimination.

A seminal decision in this area was Schneider v. State (1939), in which the Supreme Court struck down ordinances that banned leafleting without a license, but gave the licensing official unlimited discretion when granting or denying an application.

In Schneider, the Court declared: “[W]e hold a municipality cannot . . . require all who wish to disseminate ideas to present them first to police authorities for their consideration and approval, with a discretion in the police to say that some ideas may, while others may not, be carried to the homes of citizens.”

The Court’s core concern in Schneider was that speech-licensing officials would be free to engage in viewpoint discrimination if limits were not imposed on their regulatory discretion.

That concern has been borne out by the many successful challenges in the wake of Schneider. Time and time again, those challenges were brought by speakers who were barred from expressing controversial political views. Each time, the Court reaffirmed that any speech-licensing scheme that gives unfettered discretion to the licensing official would be struck down under the First Amendment.

Moreover, U.S. courts have been particularly hostile to licensing schemes that require a prospective speaker to disclose his intended message when applying for a permit.

A good example is offered by Rubin v. City of Santa Monica (C.D. Calif. 1993), in which the court struck down a permit scheme governing demonstrations in public parks because the licensor had unbridled discretion to inquire into the applicant’s intended message when deciding whether to grant a permit.

In Lamb’s Chapel, a public school district opened its facilities for after-hours use by community groups for a broad range of social, civic, and recreational purposes. However, it denied access to a church group that sought to show a film series addressing family values and child rearing from a “Christian perspective.”

The Court held that the school district had violated the First Amendment by engaging in viewpoint discrimination: “[I]t discriminates on the basis of viewpoint to permit school property to be used for the presentation of all views about family issues and child-rearing except those dealing with the subject matter from a religious standpoint.”

In Rosenberger, the Court held that a student religious journal at the University of Virginia was entitled to the same subsidy from student activity funds received by secular student journals.

The Court concluded that the university’s policy of withholding the subsidy from student religious journals was a form of viewpoint discrimination: “[T]he University does not exclude religion as a subject matter but selects for disfavored treatment those student journalistic efforts with religious editorial viewpoints. Religion may be a vast area of inquiry, but it also provides, as it did here, a specific premise, a perspective, a standpoint from which a variety of subjects may be discussed and considered. The prohibited perspective, not the subject matter, resulted in the [university’s denial of the subsidy].”

Viewpoint discrimination also arises when the government censors a private speaker.  This principle remains one of the leading principles in First Amendment law.  For example, the U.S. Supreme Court recently ruled in Matal v. Tam (2017) that a federal trademark law prohibiting disparaging marks violated the First Amendment, because it constituted impermissible viewpoint discrimination.

This article was originally published in 2009 and updated in 2017. Kevin Francis O’Neill is an associate professor at Cleveland-Marshall College of Law where he teaches First Amendment, Evidence, Civil Procedure, and Pretrial Practice. His scholarship focuses on the Speech Clause of the First Amendment. Prior to entering academia, Mr. O’Neill served as the Legal Director for the American Civil Liberties Union of Ohio where he focused special attention on First Amendment issues, reproductive freedom, police misconduct, and government mistreatment of the homeless.