By Ruth Ann Strickland
Other articles in Issues Related to Speech, Press, Assembly, or Petition, Media, Freedom of the Press issues and topics 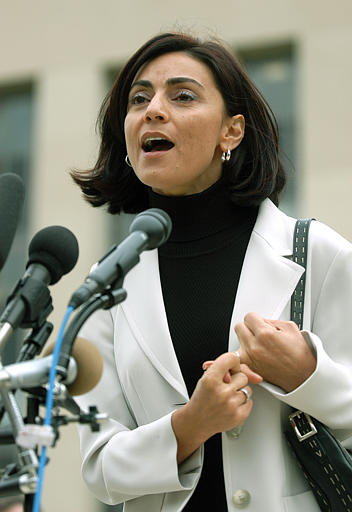 Former federal investigator Sibel Edmonds, speaking here at a press conference in April 2005, was fired by the FBI for blowing the whistle on many agency cover-ups.  Edmonds' lawsuit against the government was thrown out of a lower court when the Bush administration invoked the state secrets privilege, which allows the government to withhold information to safeguard national security. (AP Photo/Kevin Wolf, used with permission from The Associated Press)

Whistleblowers are employees or former employees in the public or private sector who expose, or blow the whistle on, illegal conduct that could affect public safety, cause wasteful spending of tax dollars, result in gross mismanagement, or violate governmental norms of public accountability.

Whistleblowers face risk of retaliation from their employer

Whistleblowers can aid in the detection of wrongdoing or corruption, but often face the threat of retaliation for their actions, whereas the press and public officials to whom whistleblowers reveal the story are more insulated from retaliatory harm.

When inside employees blow the whistle, they help authorities detect and reduce the harm associated with malfeasance and reduce the need for watchdog organizations to engage in oversight and may help prevent wrongdoing.

Some of these revelations of government and corporate wrongdoing have strengthened support for whistleblowing and for instituting more whistleblower protections. Approximately 40 federal laws have been passed to protect the public and whistleblowers. In addition, most state legislatures have enacted statutes that protect public sector employees from retaliation for reporting employer wrongdoing, and about half of the states protect public- and private-sector whistleblowing.

Other federal laws aimed at encouraging whistleblowing are the Occupational Safety and Health Act; the Savings and Loan whistleblower statute; the Toxic Substance Act; the Superfund Law; the Sarbanes-Oxley Act preventing retaliation against certain corporate whistleblowers; and laws regulating clear air, clean water, and mine safety.

These laws give federal employees the right to bypass the chain of command and share information that reasonably suggests wrongdoing with Congress.

Most federal whistleblower laws focus on protecting employees in specific settings. For example, an employee who reports clean water violations is protected from retaliation by the Safe Drinking Water Act of 1974, whereas an employee who discloses illegal dumping of polychlorinated biphenyl in a river would be covered by the Toxic Substances Control Act of 1976.

This patchwork quilt of laws means that whistleblowers who experience retaliation must understand the various statutes and find out the deadlines for filing complaints. Some states have deadlines as short as 10 days for reporting complaints. Federal statutes for reporting discrimination, retaliation and civil rights violation complaints range between 30 and 180 days. In the private sector, employees normally have 180 to 300 days to file with the Equal Employment Opportunity Commission, depending on whether the state has its own deferral agency.

Whistleblowing often carries consequences for employees who try to remain in the organizations that they exposed for fraud or wrongdoing. Whistleblowers may be cast as heroes and even receive monetary rewards for coming forward, or they may be portrayed as publicity hounds with a grudge who step forward for vindictive reasons. In fact, most whistleblowers face some form of retaliation, according to the National Whistleblower Center, a nonprofit advocacy organization. About half are fired, and others face workplace harassment or disciplinary action.

Although federal law is intended to protect whistleblowers, whistleblowers often pay a price for coming forward. In Sibel Edmonds’s case, in which she and others claimed they were fired from their positions at the Federal Bureau of Investigation (FBI) after blowing the whistle on FBI coverups after September 11, the Justice Department invoked the State Secrets Privilege, an evidentiary rule that allows the federal government to prevent disclosure of information in legal proceedings that could harm national security.

In January 2005, an investigation revealed that many of Edmonds’s allegations were supported and that she was in fact fired for blowing the whistle. As of mid-2008, her court case has not been reinstated and she remains a former employee of the FBI.

Another employee, Los Angeles prosecutor Richard Ceballos, claimed he was disciplined for whistleblowing. In a work-related memorandum, Ceballos discussed possible police misconduct. Later, he was demoted and reassigned as a result of the memo.

In Garcetti v. Ceballos (2006), the U.S. Supreme Court held that when public employees make statements pursuant to their official duties, they are not speaking as citizens for First Amendment reasons. In such statements, then, the Constitution does not protect them from employee discipline. Whistleblower groups claim that the Garcetti decision will make public employees less willing to come forward to expose waste, fraud, and abuse and that the ruling weakens whistleblower protections in general.