By Kevin R. Davis
Other articles in Laws and Proposed Laws, Pre-First Amendment, Freedom of the Press issues and topics 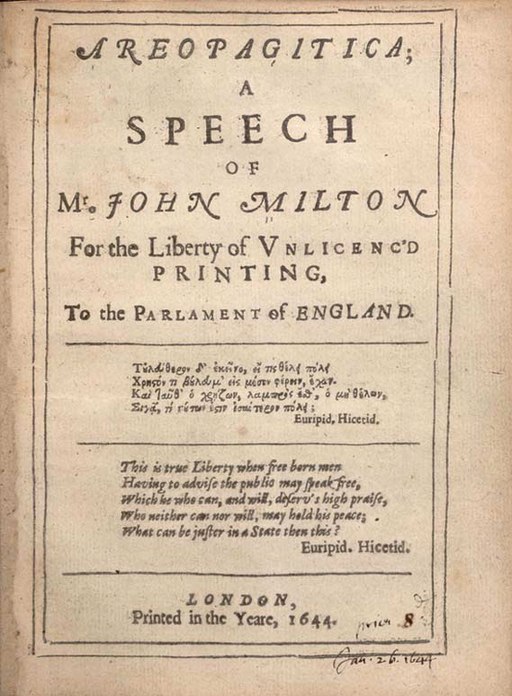 England's printing ordinance of 1643 prohibited the printing, binding, or sale of books except by persons licensed under the authority of Parliament and made the Stationers the agent of Parliament for the purpose of licensing printers. Anonymous publications were banned. The ordinance drew criticism, famously from John Milton, whose 1644 pamphlet Areopagitica was an unlicensed criticism of the censorship of printed works prior to their publication. (Public domain photo)

The 1643 “Ordinance for correcting and regulating the Abuses of the Press” completed Parliament’s takeover of the licensing of printers in Britain.

It was just one of a series of such controls Parliament would continue to exert over the press until 1695.

The framers of the U.S. Constitution were quite familiar with critiques of press licensing controls, which they addressed by protecting freedom of the press in the First Amendment.

The Crown had regulated printing, primarily by means of Star Chamber decrees, since it was introduced to England in 1476. An essential aspect of the Crown’s regulatory scheme involved a licensing process. Like laws against heresy, libel, and treason, the general requirement of licensing for printers had been a way in which the Crown silenced religious and political dissent.

Printers were licensed through the printers’ guild, the London Stationers Company, which was chartered in 1557 and given authority to conduct searches and seizures, confiscate unlicensed works, and promulgate its own regulations. In exchange for protecting the Crown’s censorship interests, the guild received the exclusive copyright to the printed works.

The enforcement of printing laws was erratic, and the regulations became a weapon for the Crown to use against Puritan religious and political leaders during the sixteenth and early seventeenth centuries. However, Parliament abolished the court of Star Chamber in 1641, which left English printing briefly unregulated.

Even as it was abolishing the Crown’s control of printers, Parliament began taking steps, with urging from the printers guild, to institute controls of its own. Orders issued from Parliament to the Stationers in July 1641, and again in January 1642, required the Stationers to record the name of any person bringing material to be printed. Another order issued from the House of Commons in March 1643 directed the Stationers to seize “scandalous and lying Pamphlets” and to arrest those responsible.

These measures foreshadowed the Printing Ordinance enacted in June 1643. Its stated purpose was to end the “great defamation of Religion and Government” resulting from unconstrained printers.

The effect of the 1643 ordinance was to establish a prepublication censorship regime. The ordinance prohibited the printing, binding, or sale of books except by persons licensed under authority of Parliament and made the Stationers the agent of Parliament for the purpose of licensing printers. Anonymous publications were banned, as were the reprinting or importation of previously printed works. The ordinance authorized the Stationers to conduct searches and seizures of unlicensed publications, destroy unlicensed printing machinery, and to arrest those suspected of printing without a license.

The ordinance drew criticism, famously from John Milton, whose 1644 pamphlet Areopagitica was an unlicensed criticism of the censorship of printed works prior to their publication.