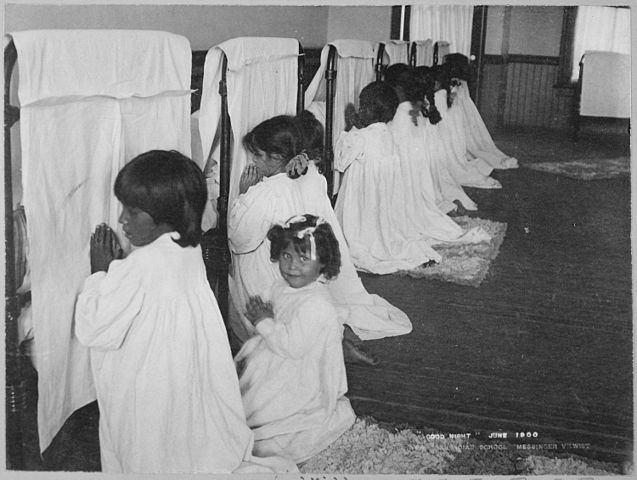 Little girls praying beside their beds at Phoenix Indian School in Arizona in 1900. In 1896, Congress passed the Indian Appropriations Act to start phasing out funding for religious schools that educated Indians. Phoenix Indian School was not a religious school, but it was a government facility where Indian children were pushed to conform to Anglo-Saxon culture. (Public domain.)

In 1896 Congress passed the Indian Appropriations Act to phase out tax-funded education of American Indians using religious schools. The early history of Indian education in the United States is just one of several episodes in U.S. history characterized by church-state conflict and a First Amendment controversy over the use of tax funds to support religious schools.

During this early struggle, Indians became victims in the conflict between Catholics and Protestants that dates from the Protestant Reformation in the 1500s. The Catholic Church had had an interest in Indian education since the time of Christopher Columbus, and Protestants had been antagonistic to Catholicism from the time of the first colonists.

This controversy between Protestants and Catholics over Indian schools was based on the differences of opinion about religious beliefs and the principles of American society. Critics of Catholicism claimed it was alien to American principles and ideals because Catholics owed allegiance to a foreign power, the pope, who was set on undermining the United States. Protestants wanted to replace sectarian schools with public ones.

Congress appropriated funds to be used by private schools

In 1819 Congress appropriated $10,000 to the War Department to be used by associations or individuals who were already engaged in educating the Indians and who wanted the government’s help in funding schools. Requests from organizations came in immediately, and thus began an eighty-year period during which the federal government supported private Indian education. The money was distributed to churches to operate their own church schools. In 1869 the government put in place the contract school system (schools for Indians under private control), thereby providing direct government support to schools run by missionary groups. Catholics ran the vast majority of contract schools.

Protestants in charge started to end funding of Catholic schools

The Protestant-Catholic conflict boiled to the surface when Baptist minister and educator Thomas Jefferson Morgan was appointed as commissioner of Indian affairs in 1889. He, in turn, appointed Daniel Dorchester, a Methodist minister, as the superintendent of American Indian schools. In 1892 all relations broke down between the Office of Indian Affairs and the Bureau of Catholic Indian Missions. Each Catholic school was then left to negotiate a separate contract. To help end government funding of Catholic mission schools, the parent organizations of most Protestant mission schools ceased applying for government funds.

Congress would no longer give funds for private schools

In 1896 Congress stepped into the fray. The Indian Appropriations Act, signed into law on June 10, 1896, declared that Congress would no longer appropriate funds for sectarian schools and that the expenditure of money for contract schools for fiscal year 1897 would be the same (or as equal as possible) among schools of various denominations. Direct federal funding for contract schools was eventually phased out completely as Congress insisted on enforcing the First Amendment separation between church and state.

This article was originally published in 2009. Susan Webb is an Adjunct Librarian at Southeastern Oklahoma State University.