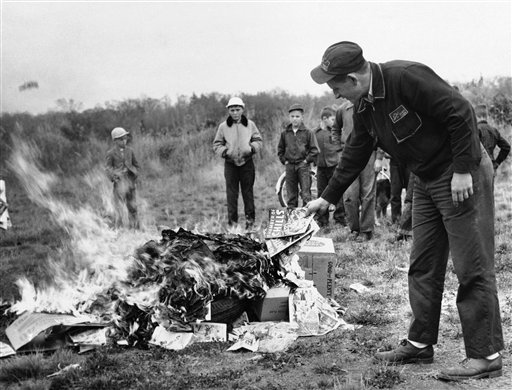 In Kingsley Books, Inc. v. Brown (1957), the Supreme Court upheld a New York statute that allowed for the destruction of obscene materials after an expedited hearing. In this photo, civilians in 1954 destroy books they think are inappropriate. Scoutmaster Richard McKallip feeds a community bonfire with comics after a house-to-house collection netted some 1,000 books on horror, crime and sex in a drive to destroy them at Winslow, Maine. (AP Photo, used with permission from the Associated Press)

The Supreme Court’s 5-4 ruling in Kingsley Books, Inc. v. Brown, 354 U.S. 436 (1957), was delivered the same day as those in Roth v. United States (1957) and Alberts v. California (1957), which redefined the test for determining what constitutes obscene material unprotected by the First Amendment.

In Kingsley Books, the Supreme Court upheld a New York statute that permitted a legal officer to bring a case to enjoin the distribution of obscene materials, which the state could destroy after an expedited hearing. The state trial judge had held that the materials in question, booklets titled “Nights of Horror,” were “dirt for dirt’s sake” and ordered them destroyed. Citing the presumption against prior restraint, however, he had refused to enjoin the publication of future issues.

Justice Felix Frankfurter authored the majority opinion upholding the procedures employed and denying that they constituted a form of prior restraint. He observed that the term prior restraint was neither “a self-wielding sword” nor “a talismanic test.” He actually found the civil measures at issue in the case to be less threatening than the criminal laws punishing the distribution of pornography. The laws went into effect after, rather than before, publication, and thus were distinguishable from the evils of prior restraint and censorship as established in Near v. Minnesota (1931).

Dissenters through the procedures gave the state censorship power

Chief Justice Earl Warren dissented on the basis that this procedure put books on trial without adequate standards and without the “personal element basic to the criminal laws.”

Justices William O. Douglas and Hugo L. Black dissented, because the injunction procedures vested the state with “the paralyzing power of a censor.” They observed that the statute made one criminal conviction for a book conclusive on other copies of a book, even though the conviction might have been aimed at a different community or age group.

Justice William J. Brennan Jr.’s dissent cited the lack of a right to a jury trial as a fatal defect of the statute. He found juries essential to judging obscenity under the tests established in Roth.