By Karen Aichinger
Other articles in Events 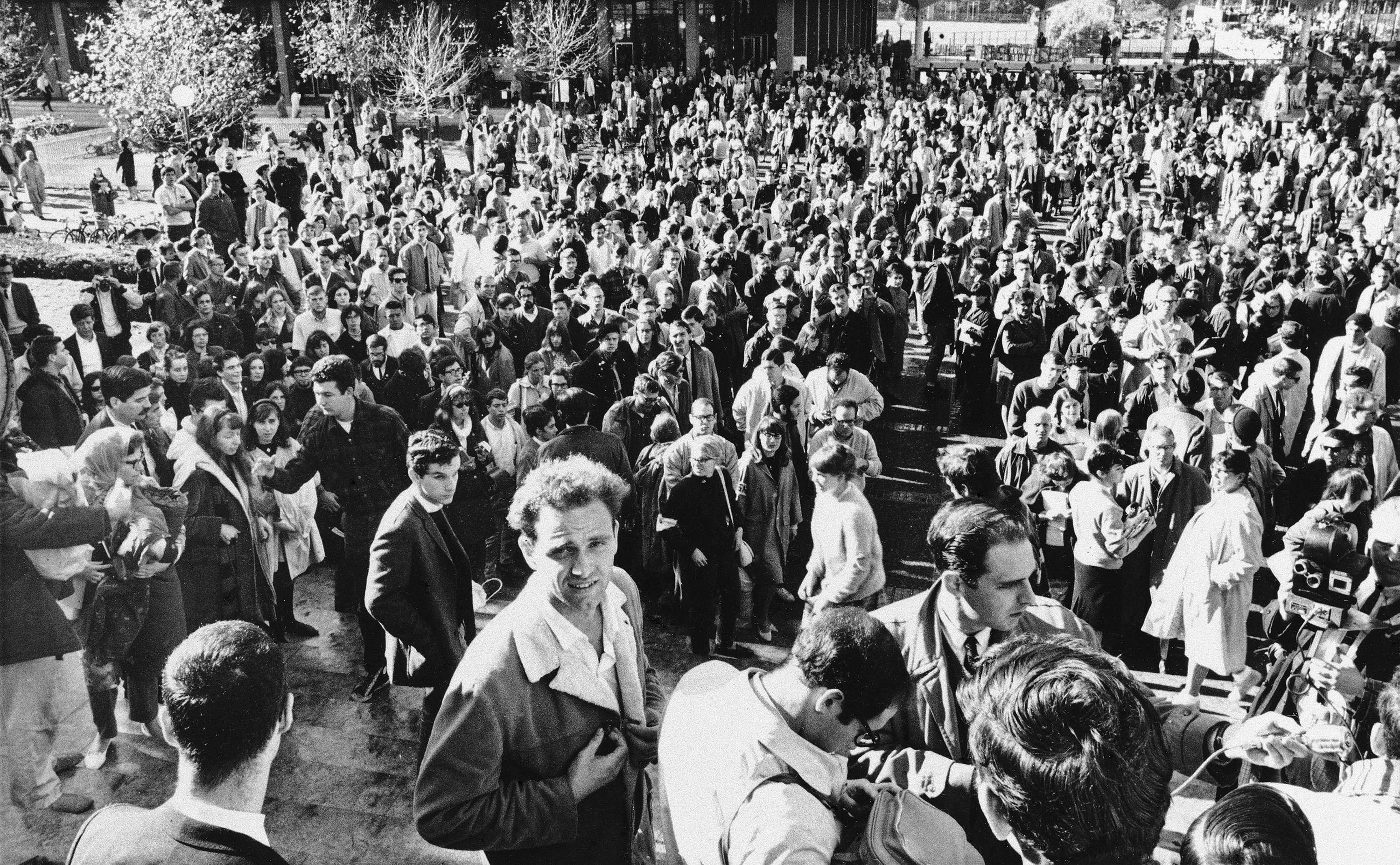 Mario Savio, facing camera foreground, leader of the so-called Free Speech Movement at the University of California, gathered a crowd of some 3,000 students in front of Sproul Hall on the Berkeley campus on Dec. 2, 1964. The Berkeley Free Speech Movement refers to a group of college students who, during the 1960s, challenged many campus regulations limiting their free-speech rights. Savio, 21, told the crowd that sit-in demonstrators planned to occupy the second floor of Sproul Hall until the administration dropped disciplinary action against four free speech leaders. (AP Photo, used with permission from The Associated Press)

The Berkeley Free Speech Movement refers to a group of college students who, during the 1960s, challenged many campus regulations limiting their free-speech rights.

In the wake of McCarthyism’s anti-Communist sentiments during the 1950s, public universities in California had enacted numerous regulations limiting students’ political activities. At the University of California, Berkeley, student groups taking part in any on- or off-campus political activities were banned from campus.

But by the 1960s, students were shunning the old-school ideas of paternalistic university supervision. Spurred by the anti–Vietnam War protests and the growing civil rights movement, they began to ignore the prohibitions, and liberal-leaning university administrators ignored the students’ activities. Although students kept political activities just off campus, they were often recruited by outside organizers for public protests. When hundreds of Berkeley students were arrested at these events, the media painted the university as a haven for liberals leaning toward radicalism. Pressured by the state legislature, Berkeley administrators issued orders that students could no longer carry out political activities near the campus.

In 1964, Mario Savio and 500 fellow students marched on Berkeley’s administration building to protest the university’s order. He and other leaders called for an organized student protest to abolish all restrictions on students’ free-speech rights throughout the University of California system. Campus representatives for the Congress of Racial Equality (CORE), Student Nonviolent Coordinating Committee (SNCC), and Students for a Democratic Society (SDS) joined the protest. After a stand-off with campus police, a temporary compromise was reached, but by then the Berkeley Free Speech Movement (FSM) had been born.

Students and many faculty, united by the liberalism of the times, began to see the FSM as a moral obligation. Savio continued to insist that the First Amendment was the only valid guideline for student activities, especially political, and he condemned the administration’s rules as “prior restraint.”

Meanwhile, more political activities were being carried out on campus, further antagonizing the administration. But by then the FSM had gained enough liberal-minded supporters on campus that it was able to temporarily prevent severe administrative retaliation. The Board of Regents, however, failed to recognize the FSM’s seriousness and clamped down hard with punitive sanctions.

On Dec. 2, 1964, the 5,000 people gathered outside the administration building listened to Savio invoke the “conscience of the community” for a campus-wide strike to bring down the university “machine.” As the first step, 1,500 of Savio’s audience entered the building for a nonviolent sit-in demonstration. After thousands witnessed an increasingly violent police action to remove the demonstrators, Berkeley faculty voted overwhelmingly to support the FSM.

Although members of the Board of Regents continued to assert their right to control campus activities, within days they hired a new chancellor known to be sympathetic to student activism. His first official act was to grant the demands of the Free Speech Movement.