By John Allen Hendricks (Updated May 2017 by John R. Vile)
Other articles in Laws and Proposed Laws, 1951-2007, Freedom of the Press issues and topics 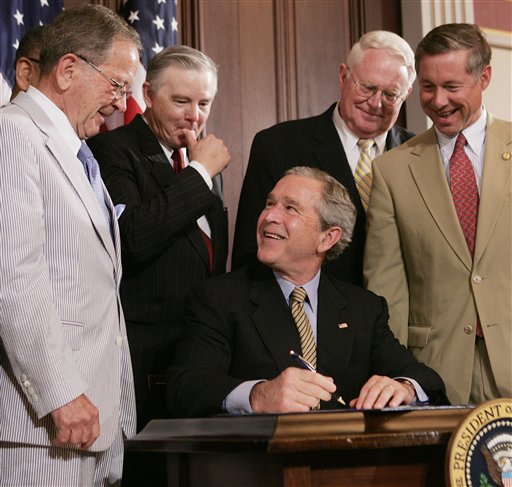 President Bush, center, smiles as he signs S. 193, the Broadcast Decency Enforcement Act of 2005, Thursday, June 15, 2006, in the Eisenhower Executive Office Building in Washington. The Broadcast Decency Enforcement Act of 2005 increased fines against broadcasters tenfold—from $32,500 to $325,000 per incident for broadcast networks, up to $3 million per incident if aired on multiple stations—for violating obscenity and indecency standards. Some First Amendment advocates are concerned that the enhanced fines will have a chilling effect on free speech. (AP Photo/Ron Edmonds, used with permission from the Associated Press)

The Broadcast Decency Enforcement Act of 2005 increased fines against broadcasters tenfold—from $32,500 to $325,000 per incident for broadcast networks, up to $3 million per incident if aired on multiple stations—for violating obscenity and indecency standards. President George W. Bush signed the act into law on June 15, 2006.

The bipartisan measure, which amended the Communications Act of 1934, passed by a vote of 379 to 35 in the House of Representatives and by unanimous consent in the Senate. The law was designed to make broadcast radio and television networks more family oriented by imposing significant fines for violations. It does not apply to satellite radio or satellite and cable television stations.

FCC can fine stations for both obscenity and indecency

Broadcasts are deemed indecent when they describe or depict any sexual or excretory activities in an offensive manner, as defined by community standards, when children might be in the audience (between the hours of 6 a.m. and 10 p.m.). Although indecent material has limited First Amendment protection, in Federal Communications Commission v. Pacifica Foundation (1978), the Court ruled that the FCC could fine radio stations that broadcast indecent speech during daytime hours.

In 2002, for example, the FCC fined Viacom for indecency violations by shock jocks Opie and Anthony for the duo’s broadcast descriptions of a couple engaging in sexual intercourse in New York City’s St. Patrick’s Cathedral. The FCC has also levied fines for indecent television broadcasts, most notably against the CBS network for a 2004 Super Bowl half-time performance during which Janet Jackson’s breast was exposed.

Although the Broadcast Decency Enforcement Act of 2005 continues to permit broadcasters to air indecent material during the safe harbor period of 10 p.m. to 6 a.m., some First Amendment advocates are concerned that the enhanced fines will have a chilling effect on free speech.

In FCC v. Fox Television Stations (2012), the Supreme Court overruled fines that the FCC imposed for so-called “fleeting expletives” or “fleeting nudity,”  but it did so on the basis that the FCC had not extended “fair notice” to stations, which it said was fundamental to due process.

The implementation of such policies remains unresolved.

This article was originally published in 2009 and updated in 2017. John Allen Hendricks is Professor and Chair of the Department of Mass Communication at Stephen F. Austin State University in Texas. He has taught media law and ethics for almost 25 years and is the author of more than 13 books on the broadcast industry, social media, and political communication.