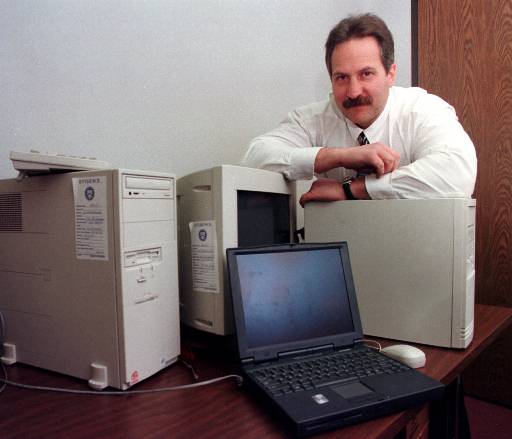 Donald Daufenbach, a senior special agent with the U.S. Customs Service, poses with some of the computers that have been seized in an ongoing child pornography case Feb. 3, 1999, in Salt Lake City. Before the explosion of child pornography on the Internet, Daufenbach worked undercover in the drug world. He says he perfected a "dirtbag" look so subtle in its nuances that people scurried across the street to avoid him. But when Daufenbach goes undercover today, he simply sits at his computer to enter another netherworld of crime. (AP Photos/Douglas C. Pizac, used with permission from the Associated Press)

The Child Pornography Prevention Act of 1996 (CPPA) expanded on earlier such laws as the Child Protection and Obscenity Enforcement Act of 1988 by making it a federal crime not only to send images of real children engaged in explicit sexual activity but also to use “morphed,” that is, computer-generated images of the same.

CPPA was found to violate the First Amendment

Although the Supreme Court had upheld laws involving the image transmission of actual children involved in pornographic activities, it decided in Ashcroft v. Free Speech Coalition (2002) that the CPPA was overly broad and unconstitutional.

The Court invalidated two provisions of the law that criminalized depictions that “appear to be” and “convey the impression” of a minor engaged in sexual conduct, even if the depiction does not involve an actual minor.

The Court also questioned the supposed link between computer-generated pornography and the abuse of actual children.