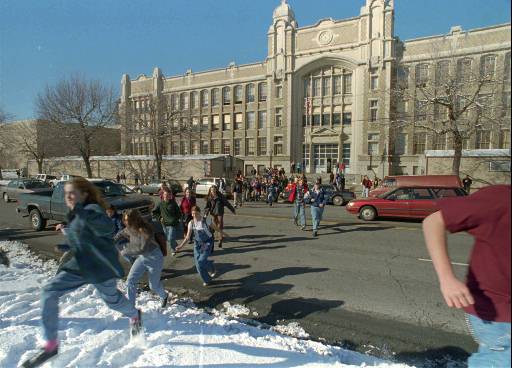 The Equal Access Act of 1984 forbids public schools from receiving federal funds if they deny students the First Amendment right to conduct religious meetings. Some schools have sought to avoid controversial clubs to form by eliminating all non-curricular clubs.  In this 1996 photo, students participate in a walkout in Salt Lake City to protest the Board of Education’s decision earlier this week to ban non-curricular clubs. (AP Photo/Steve C. Wilson, used with permission from the Associated Press)

The Equal Access Act of 1984 forbids public schools from receiving federal funds if they deny students the First Amendment right to conduct meetings because of the “religious, political, philosophical, or other content of the speech at such meetings.”

Passed by 88 to 11 in the Senate and 337 to 77 in the House of Representatives, it was motivated by the Supreme Court ruling in Widmar v. Vincent (1981), which guaranteed these protections on public university campuses. It was part of an ongoing effort by religious conservatives to secure a presence for religion in public schools in the wake of the Court’s decisions in Engel v. Vitale (1962) and Abington School District v. Schempp (1963), forbidding school-sponsored prayer and Bible reading.

Congress had made repeated attempts to overrule the Court or strip it of jurisdiction in “school prayer” cases. Many states, meanwhile, had introduced legislation requiring a moment of silence in public schools. In 1984 President Ronald Reagan promised a constitutional amendment to put matters concerning prayer in schools in the hands of state and local authorities.

Despite the previous rejection of equal-access proposals by various federal and state courts as violations of the establishment clause, ”school prayer” advocates, after failing repeatedly in their efforts, turned their attention to passing equal-access legislation. Because 1984 was an election year, Republicans had a strong incentive to make good on promises to “put God back in the schools,” whereas Democrats wanted to avoid being seen as anti-religious.

The Equal Access Act of 1984 applies only to schools that allow students to form groups not specifically linked to the curriculum (a chess club, for example). Moreover, the act applies only to groups that meet during noninstructional times and under the same terms that existing noncurricular clubs function.

The act also stipulates that meetings must be voluntary, initiated by the students, and of no specified numerical size. School employees, such as faculty advisers, may attend, but not participate, in meetings with religious content. Persons not connected with the school may not direct or regularly attend the meetings.

Also, students may not interfere with the educational purpose of the school. School authorities cannot specify the content of prayer, and no student or school employee can be compelled to attend religious activities; public funding for these religious activities is limited to the incidental cost of providing space.

Supporters of the Equal Access Act of 1984 promoted it as protection of the “free exercise” rights of students, whereas strict separationists voiced concerns about its use of public facilities for religious purposes. However, its protection extends to political and philosophical content as well, allowing the argument that exclusion of religious meetings would violate the required government neutrality toward religion.

Upheld by the Supreme Court in the case of Board of Education of the Westside Community Schools v. Mergens (1990), the Equal Access Act of 1984 has been the source of considerable controversy and litigation since its passage.

The Mergens litigation arose after Nebraska public school officials refused to allow student Bridget Mergens and classmates to form a Bible club in school, arguing that the Equal Access Act violated the establishment clause; the argument was rejected by the Supreme Court.

Act has continued to foster controversy

Some schools sought to avoid allowing controversial clubs to form by eliminating all other noncurricular clubs, and other schools redefined existing clubs as “curricular,” asserting their presumed benefits for the curriculum.