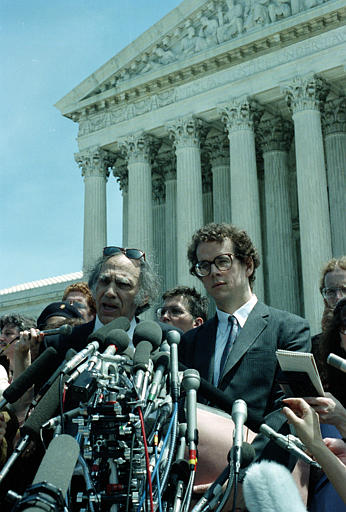 Attorney William Kunstler, left, and David Cole, right, meet with reporters on the steps of the Supreme Court building after arguing against the Flag Protection Act of 1989 in 1990. The Court struck down the law on First Amendment grounds in United States v. Eichmann. (AP Photo/Jeff Markowitz, used with permission from the Associated Press)

In response to protests against the Vietnam War that were accompanied by desecration of the American flag, the 90th Congress enacted the Flag Protection Act of 1968. Not only did this act nationalize a 1947 law prohibiting desecration of the U.S. flag in the District of Columbia, it also specified that “[w]hoever knowingly mutilates, defaces, physically defiles, burns, maintains on the floor or ground, or tramples upon any flag of the United States shall be fined under this title or imprisoned for not more than one year.”

During the next two decades, many critics of the act sought to overturn it on the grounds that it was inconsistent with the First Amendment’s freedom of speech.

Although challenges persisted, the lower courts continued to uphold the constitutionality of the statute, and the Supreme Court declined to review these rulings.

However, after 20 years of tension over the symbolic importance of the U.S. flag and an individual’s freedom of speech to desecrate the flag in protest, the Court agreed to hear the case of Texas v. Johnson (1989). In a 5-4 decision, the Court upheld flag burning as an act of protected speech under the First Amendment. The Court’s decision reviewed a Texas state flag desecration statute rather than the federal law.

In response to this ruling, the 101st Congress passed the Flag Protection Act of 1989 giving Congress the right to enact statutes criminalizing the burning or desecration of the flag in public protest.

However, the act was challenged in United States v. Eichman (1990). Again in a 5-4 decision, the Supreme Court struck down the 1989 act on the grounds that the government’s interest in preserving the flag as a symbol did not outweigh an individual’s First Amendment right to desecrate the flag in protest.

Although the First Amendment continues to protect freedom of speech, the interpretation of this freedom relentlessly fuels much debate, and efforts are still under way in Congress to criminalize flag burning, possibly through constitutional amendment.

This article was originally published in 2009. Mitzi Ramos is an Instructor of Political Science at Northeastern Illinois University.