By Susan Gluck Mezey
Other articles in Laws and Proposed Laws, 1951-2007 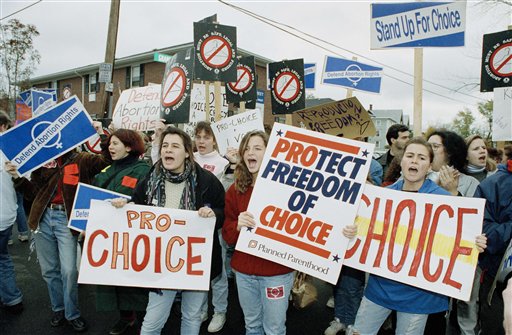 In this photo, pro-choice demonstrators rally outside the Women's Medical Clinic in Rhode Island in 1991 where nearly 500 anti-abortion protestors gathered to block the entrance to the clinic. Due to the increasing number of blockades of abortion clinics by anti-abortion groups and the inability or unwillingness of local law enforcement officials to protect the clinics from intimidation and violence, Congress passed the Freedom of Access to Clinic Entrances Act of 1994 to make it a federal crime to physically obstruct the entrance to a clinic in order to interfere with women seeking abortions or other reproductive health services. (AP Photo/Matthew Brown, used with permission from the Associated Press)

The Freedom of Access to Clinic Entrances Act of 1994 (FACE) makes it a federal crime to physically obstruct the entrance to a clinic or to use force, the threat of force, or physical obstruction, such as a sit-in, to interfere with, injure, or intimidate clinic workers or women seeking abortions or other reproductive health services.

Some observers see the act as a way in which women can secure abortions without fear of harassment, but the opponents of abortion view it as violating their First Amendment free speech rights.

After its enactment by Congress, President Bill Clinton signed the Freedom of Access to Clinic Entrances Act into law. Fines for violent offenders for their first offense can be as high as $100,000, with prison sentences of one year. Repeat violent offenders can receive up to three years in prison and fines of up to $250,000. If the protest resulted in an injury to clinic staff or a patient, the prison sentence can go as high as 10 years.

In the case of first-time convictions of protesters who engage in nonviolent physical obstruction, such as sit-ins or blockades, FACE allows judges to impose fines of up to $10,000 and six-month prison terms. Second convictions for these kinds of offenses are punishable by up to 18 months in jail and fines of up to $25,000. The individuals harmed by the protest activities may also sue the protesters for civil damages.

FACE was adopted due to blockeds of abortion clinics

Congress adopted FACE in reaction to the increasing number of blockades of abortion clinics by anti-abortion groups and the inability or unwillingness of local law enforcement officials to protect the clinics from intimidation and violence.

The law was introduced in Congress after the Supreme Court ruled in Bray v. Alexandria Women’s Health Clinic (1993) that federal court judges were not permitted to invoke a Reconstruction-era civil rights law, the 1871 Ku Klux Klan Act, against the harassment and protest activities that frequently occurred outside abortion clinic entrances. The KKK Act prohibited conspiracies by persons seeking to deprive “any persons or class of persons” of equal rights.

In the 6-3 Bray decision announced by Justice Antonin Scalia, the Court held that women seeking abortions were not within the class of people intended to be protected by the law, and the Court barred federal court judges from invoking the act to enjoin protest activity aimed at abortion clinics.

Reacting in part to the Bray decision, as well as to the growing violence of anti-abortion protesters, Reps. Charles E. Schumer, D-N.Y., and Constance Morella, R-Md., introduced FACE in the House of Representatives in February 1993. Congressional support was also spurred by the March 1993 shooting death of a Florida physician, Dr. David Gunn, and the wounding of another doctor in Wichita, Kan., by anti-abortion activists.

FACE has been upheld against First Amendment challenges