By Brandi M. Snow
Other articles in Laws and Proposed Laws, 1951-2007, Freedom of the Press issues and topics 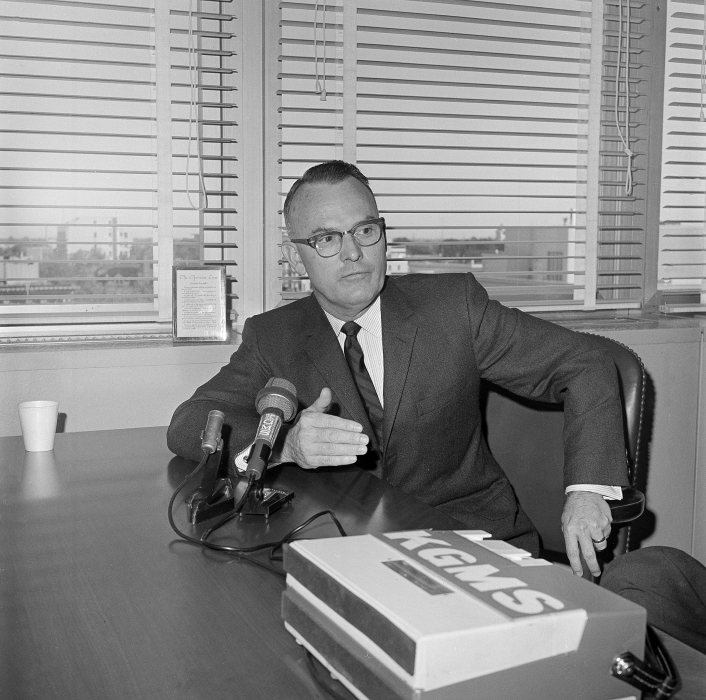 Democratic Congressman John Moss of California crusaded for 11 years for the Freedom of Information Act. Congress finally passed it in 1966. The law establishes that records of federal government agencies are accessible to the public. In urging its passage, Moss told his colleagues, "Our system of government is based on the participation of the governed, and as our population grows in numbers it is essential that it also grow in knowledge and understanding. We must remove every barrier to information about — and understanding of — government activities consistent with our security if the American public is to be adequately equipped to fulfill the ever more demanding role of responsible citizenship." (AP Photo of John Moss in 1965)

The First Amendment protects freedom of speech and press, but how can the citizenry hold a government or its members accountable for its actions if those actions take place behind closed doors? In 1966 Congress adopted the Freedom of Information Act (FOIA), acting on the principle that government should be transparent to the governed. In a democratic system, citizens have the right to hold government accountable for its actions by exercising First Amendment freedoms, by means of the election process, and by use of the court system to review legislative and executive actions.

FOIA establishes that records of the federal government agencies are accessible to the public. The act had little strength when it was initially passed. President Lyndon B. Johnson opposed the bill and issued a statement focusing on the law's exemptions. In 1974 Congress strengthened it in the wake of the Watergate scandal, when citizens felt distrustful of government actions behind closed doors. The act was amended again in 1986 and 1996. The 1996 amendments, collectively known as E-FOIA, made provision for electronic publication and review of some materials.

FOIA requires in section 552(a)(4)(A) that each federal agency promulgate regulations on the assessment of fees for information released under the act. Critics of the fee provision in FOIA frequently argue that charging a fee inhibits the average citizen from requesting information. Critics also argue that the fees charged by some agencies are unreasonable, an argument partly supported by the different fee schedules used by different agencies.

Proponents argue that agencies need to charge fees to allow them to recoup some of the costs of gathering and duplicating the records requested and to prevent frivolous requests that would only waste time and resources.

FOIA addresses the potential problem of unreasonable copying fees, specifying that the fees be reasonable, fitting the circumstance. In addition, federal agencies are instructed to furnish documents “without any charge or at a charge reduced...if disclosure of the information is in the public interest.”

Agencies are not to collect fees before the release of records, unless the individual requestor previously failed to pay fees or the agency anticipates the fee will exceed $250. The question remains, however, as to whether fees per se have a chilling effect on public participation by means of FOIA records requests, and, if so, whether the taxpayers should absorb such fees.

Each and any of these courts, upon a properly filed complaint, is given jurisdiction under FOIA to enjoin the agency from withholding the records and to order the records produced if the court finds that the records are being withheld improperly. Section 552(a)(4)(E) instructs federal agencies that the court may also assess the requestor’s legal fees against the federal agency if the withholding of records is found to have been improper.

Some information is exempt from FOIA

Courts have held that these exceptions and six others, set out in Section 552(b), should be narrowly construed in favor of the party requesting records. However, most of the litigation surrounding FOIA has dealt with instances in which an agency used one of the nine exceptions as grounds not to release records.

Court has ruled both for and against information seekers

In 1972 the Supreme Court opined in Branzburg v. Hayes that the First Amendment right to freedom of the press would be “eviscerated” without some form of protection for gathering information from government sources. Nevertheless, the Court has not always ruled on the side of public disclosure.

For example, in United States Department of State v. Ray (1991), the State Department refused to release notes by personnel on the treatment of Haitian refugees who had been involuntarily returned to Haiti. The request was made by an immigration attorney who wanted the notes and the names of the returnees in order to make the case that these individuals were subject to political persecution and so they could be interviewed by human rights activists.

In Ray, the Court held that State could withhold the requested information to protect the privacy interests of the returnees. Release of their identities “would not shed any additional light on the Government’s conduct of its obligations,” the Court stated. Thus the returnees’ own privacy rights were used to prevent an attorney from helping them to make a case for asylum.

By contrast, in United States Department of the Interior v. Klamath Water Users Protective Association (2001) the Court demonstrated that it would not automatically rubber-stamp a claim of exemption. In this case, the Department of the Interior argued that records exchanged between the department and various Indian tribes on disputed water rights should be considered privileged intra-agency memoranda.

FBI does not have a blanket FOIA exemption

Perhaps most notably, in United States Department of Justice v. Landano (1993) the Court held that the Federal Bureau of Investigation (FBI) does not have a blanket FOIA exemption for law enforcement records to prevent disclosing the identity of FBI informants. Instead, the Court ruled, the FBI must present the rationale, on a case-by-case basis, for why an informant’s identity must not be disclosed.

In the majority opinion, Justice Sandra Day O’Connor stated, “Although we recognize that confidentiality often will be important to the FBI’s investigative efforts, we cannot say that the government’s sweeping presumption comports with common sense and probability.” Rather, she maintained, the agency must be able to demonstrate that it was reasonable to infer under the circumstances that the information had been provided with an expectation of confidentiality.

Indeed, each of the exemptions listed in FOIA has been questioned by the courts, and most remain, at least to some degree, open to interpretation. Such ambiguity is perhaps inevitable in view of the broad range of federal agencies and the information they may be requested to produce. It must be acknowledged, however, that FOIA, notwithstanding any ambiguity that still exists in its interpretation, has made great strides in opening the actions of federal agencies to the scrutiny of the citizenry.