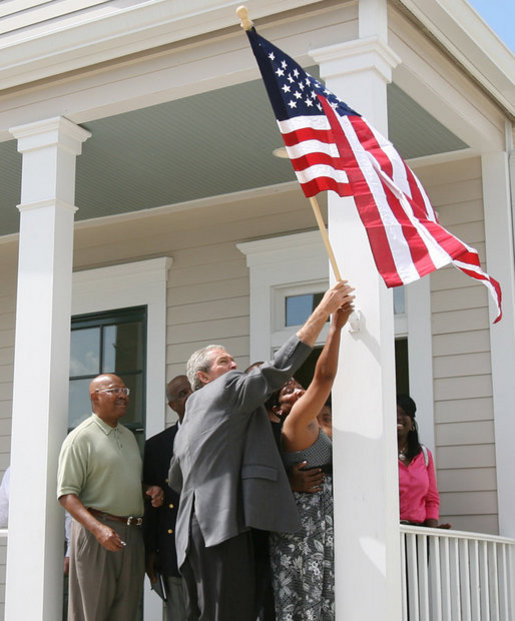 The Freedom to Display the American Flag Act of 2006, signed by President George W. Bush, prohibits association-governed communities from preventing their members from displaying the U.S. flag. In this photo, Bush helps hang a flag outside the new home of Gen White, in 2007 in New Orleans. (White House photo by Shealah Craighead, public domain)

The Freedom to Display the American Flag Act of 2006, signed by President George W. Bush, prohibits association-governed communities from preventing their members from displaying the U.S. flag. The Community Associations Institute estimates that 57 million Americans were living in 286,000 association-governed communities in 2006 (Tompkins 2006). These private organizations serve some of the same functions as governments.

In response to efforts by some condominium, cooperative, and residential real estate management associations to regulate the display of American flags in neighborhoods, Congress — which so far has been unable to muster sufficient majorities for a constitutional amendment prohibiting flag desecration — unanimously adopted this law.

It prohibits any such associations from adopting any policy “that would restrict or prevent a member of the association from displaying the flag of the United States on residential property within the association with respect to which such member has a separate ownership interest or a right to exclusive possession or use.”

Section 4 of the law maintains provisions related “to the proper display or use of the flag” as well as “any reasonable restriction pertaining to the time, place, or manner of displaying the flag.”

This provision leaves open the possibility that associations could still impose reasonable time, place, and manner restrictions on flags, such as regulations on the height of flagpoles and the size of flags.