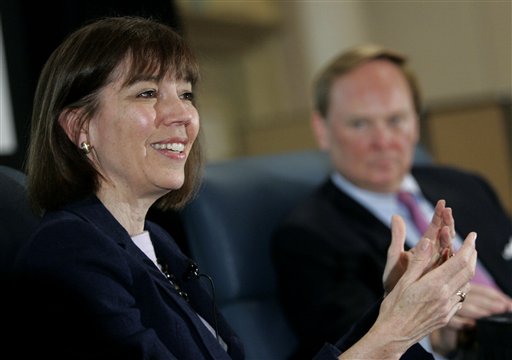 In this photo, New York Times reporter Judith Miller, left, sits with lawyer Bruce Sanford, right, as she speaks at a conference in 2005. Miller, who was jailed 85 days for refusing to reveal a source, defended her decision to go to jail to protect the source and told a journalism conference that reporters need a federal shield law so that others won't face the same sanctions. Congress has tried to pass a federal shield law, the Free Flow of Information Act, several times but has been unsuccessful. (AP Photo/Jae C. Hong, used with permission from the Associated Press)

The Free Flow of Information Act would create a federal shield law, similar to those in almost all states, that would protect reporters from punishment for refusing to disclose their confidential sources in any federal criminal or civil case, unless those authorities meet strict criteria.

The Free Flow of Information Act, which has been regularly introduced in Congress since 2005, is largely a response to the Supreme Court decision in Branzburg v. Hayes (1972) and accompanying cases. These cases decided that reporters were not entitled to special exemption from testifying before grand juries about information they had received from confidential informants.

Bill has been introduced many times in Congress but never passed

The 2007 version of the bill, co-sponsored in the House by Rick Boucher, D-Va., and Mike Pence, R-Ind., was passed by a vote of 398-21 and sent to the Senate. Despite support from Sens. Richard G. Lugar, R-Ind., Patrick J. Leahy, D-Vt., and Arlen Specter, R-Pa., it stalled in the second chamber, in part because of opposition by the Department of Justice and a threatened veto by President George W. Bush, who was concerned in part about its possible impact on the war on terrorism.

2017 bill would apply to information uncovered by professional journalists

The latest proposed bill, like earlier versions, would prevent federal entities from compelling journalists to provide information uncovered as part of their work unless such entities have "exhausted all reasonable alternative sources" and

The proposal further seeks to ensure that information solicited by the government will “not be overbroad, unreasonable, or oppressive” and that it will “be narrowly tailored in subject matter and period of time covered so as to avoid compelling production of peripheral, non-essential, or speculative information.”

The law would apply to “a person who regularly gathers, prepares, collects, photographs, records, writes, edits, reports, or publishes news or information that concerns local, national, or international events or other matters of public interest for dissemination to the public for a substantial portion of the person’s livelihood or for substantial financial gain.”

Supporters point to some high-profile federal cases in which news reporters were faced with the decision of revealing their sources or going to jail. Indeed, supporters of shield laws maintain that for reporters to transmit accurate information to the public, they must be able to search freely for information without the threat that the government will force them to reveal confidential sources, thereby making those sources less likely to share information.

Opponents argue that the First Amendment does not entitle members of the press to special privileges against disclosure that do not apply to other citizens.

This article first published in 2009 and has been updated. The primary contributor was Upohar Haroon, a graduate student at the University of Florida. It has been updated by the First Amendment Encyclopedia.