By John R. Vile
Other articles in Laws and Proposed Laws, 1951-2007, Freedom of the Press issues and topics 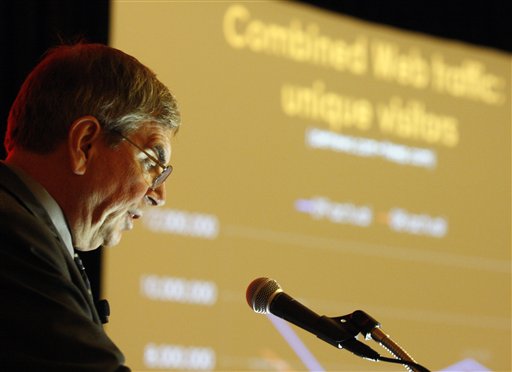 The Detroit Free Press and Detroit News have been run under joint operating agreement, allowed under the 1970 Newspaper Preservation Act. In this 2009 photo, Detroit Free Press Editor and Publisher speaks at the Associated Press Managing Editors conference about the newspaper's decision to cut home delivery to the three days of the week that generate the most advertising revenue _ Thursday, Friday and Sunday. (AP Photo/Tom Gannam, used with permission from the Associated Press)

In 1970 Congress enacted the Newspaper Preservation Act, a law designed to preserve a vigorous press by helping to keep one or both competing newspapers in the same city from going out of business.

The act was passed in response to the Supreme Court decision in Citizen Publishing Co. v. United States (1969), which ruled that a joint operating agreement (JOA) between two competing newspapers in Tucson, Arizona, violated the Sherman Antitrust Act.

One newspaper was published by the Citizen Publishing Company and the other by the Star Publishing Company.  JOAs allow competing papers to share ownership and advertising revenues (the source of most of their profits), but they must maintain separate editorial staffs in order to provide their city with more diverse viewpoints.

Seeking to preserve the 21 JOAs in existence at the time of the Citizen Publishing decision, the law allowed these agreements to remain in effect as long as only one of the newspapers on its own was “likely to remain or become a financially sound publication.” The law established a somewhat more stringent test for the creation of new JOAs by permitting such agreements only when one of two competing papers was in “probable danger of financial failure.”

In Michigan Citizens for an Independent Press v. Thornburgh (1989), an equally divided Supreme Court issued a brief per curiam opinion affirming such an agreement, approved by then attorney general Edwin Meese III (and defended by the current attorney general, Richard L. Thornburgh), between the Detroit Free Press and the Detroit News. The agreement was unique in that it specified that the papers would issue joint Saturday and Sunday issues, with one paper writing the editorials on Saturday and the other paper writing them on Sunday.

More than 20 joint operating agreements between newspapers have been terminated, often with one of the newspapers going out of business or becoming an online-only news source, according to a 2018 article in Crain's Detroit Business about the potential fate of the Detroit JOA. The article said that an estimated five newspaper JOAs still exist.