By Sharon L. Morrison
Other articles in Laws and Proposed Laws, 1951-2007, Freedom of the Press issues and topics 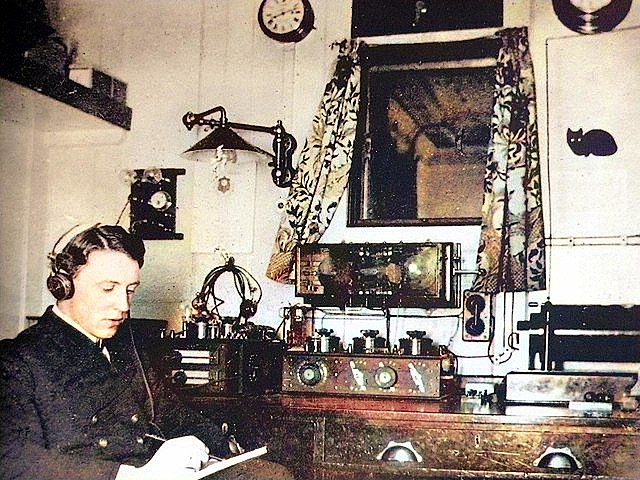 The U.S. government began to regulate radio after the April 15, 1912 sinking of the Titanic about 370 miles southeast of Newfoundland. The emergency signal that was broadcast by wireless operators on board the Titanic was received in Newfoundland, but as the news broke, amateur radio operators on the U.S. East Coast filled the airwaves with radio noise that prevented the distress signal from being relayed promptly. This 1913 photo is of a Marine radio transceiver on the RMS Olympic, showing the technology of the day. (Image via Wikimedia Commons, public domain)

With congressional passage of the Radio Act of 1912, the U.S. government entered the regulatory realm of radio.

Although this medium is clearly covered by the speech protection of the First Amendment, both the nature of this technology and its widespread availability to people (including children) who cannot read have continued to raise unique First Amendment issues that were reflected in this early legislation.

The 1912 law was preceded by the Wireless Ship Act of 1910, but a key flaw was that it did not allocate radio frequencies, and as a result, interference over the airwaves remained a major problem in wireless communications.

The impetus for passage of the Radio Act of 1912 was the sinking on April 15, 1912, of the passenger ship Titanic about 370 miles southeast of Newfoundland.

For Congress, this disaster was an example of what could happen when technology developed faster than regulation. The emergency signal broadcast by wireless operators on board the ship was received by a Marconi telegraph station in Newfoundland, but, as the news broke, amateur radio operators up and down the U.S. East Coast filled the airwaves with radio noise that prevented the distress signal from being relayed promptly.

There was adequate radio communication, but the proper procedures, including monitoring the frequency and recognizing the priority of emergency traffic, were lacking.

In the 1912 act, the government for the first time seized control of the broadcast spectrum and assumed responsibility for its allocation among various uses and users.

The act provided for the licensing of radio operators, a separate frequency for distress calls, absolute priority for distress calls, and 24-hour radio service for ships at sea. The act also required all amateur radio broadcasters to be licensed, and it prohibited them from broadcasting over the main commercial and military wavelengths.

Because the broadcast spectrum is finite and considered to be public-owned, the Court has used spectrum scarcity to justify this disparate treatment of otherwise protected speech.

Spectrum scarcity is based on the theory that because the broadcast spectrum is limited and is a valuable public resource, government intervention is required to protect this resource by restricting who may use it and how. The public, not the broadcasters, have a collective right of access to information.

This article was originally published in 2009. Sharon L. Morrison was the Library Director at Southeastern Oklahoma State University.