By Dale Mineshima-Lowe (Updated July 2019 by Deborah Fisher)
Other articles in Laws and Proposed Laws, 1951-2007 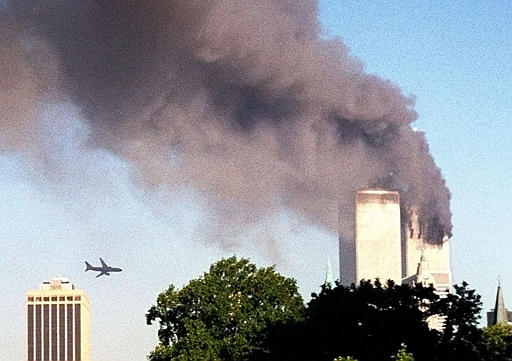 A plane approaches New York's World Trade Center moments before it struck the tower at left, as seen from downtown Brooklyn Sept. 11, 2001. In an unprecedented show of terrorist horror, the 110 story towers collapsed in a shower of rubble and dust after 2 hijacked airliners carrying scores of passengers slammed into them. Just 45 days after the terrorist attacks, Congress passed the Patriot Act, giving federal authorities new power to intercept communications for the purpose of deterring and punishing terrorism. But the law also has come under scrutiny for incursions into the First Amendment liberties of Americans. (AP Photo/ William Kratzke, used with permission from the Associated Press)

The act gives federal officials sweeping and expanded authority to track and intercept communications for law enforcement and intelligence-gathering purposes. It provides law enforcement with investigatory tools for the purpose of deterring and punishing acts of terrorism within the United States and abroad.

Met initially with strong support, the USA Patriot Act has since garnered criticism on the grounds that, in the fight against terrorism, it treads heavily on citizens’ civil liberties and First Amendment rights.

Following the September 11, 2001, terrorist attacks the federal government moved swiftly to respond, taking steps to avoiding a repeat of the atrocities and implementing preemptive measures against those suspected of having connections to terrorist groups both inside and outside the United States. The bill that emerged in Congress — Uniting and Strengthening America by Providing Appropriate Tools Required to Intercept and Obstruct Terrorism Act of 2001 —  is commonly known as the Patriot Act.

The act passed through Congress with widespread support. Senate passage occurred on October 11, 2001, and House passage occurred the next day. The House passed a “clean” bill on October 24, 2001, which both incorporated and resolved differences between the House and Senate measures. The Senate agreed on the changes the following day, with just one dissenting vote and one nonvoting member. President George W. Bush signed the bill into law on October 26, 2001.

The Patriot Act, by amending old legislation and incorporating new provisions, has expanded greatly the authority of federal officials. In addition, executive orders and related legislation have further expanded federal power in the fight against terrorism. The act and its ancillaries aid federal authorities in their efforts to close off U.S. borders to foreign terrorists, detain and remove terrorists already within U.S. borders, and cut off financial resources utilized by terrorists and terrorist organizations.

Law enforcement agencies are empowered with the means to conduct secret searches, surveillance of telephone and Internet communications, and acquisition of individuals’ private records (including medical and student records) without probable cause for the purpose of intelligence-gathering. One example of the federal government’s extensive reach involved its controversial seizure of telephone and cell phone records from telephone companies without being required to show reasonable suspicion or probable cause.

The impact of the Patriot Act has been both immediate and far-reaching.

Its passage has resulted in new procedures and penalties to combat domestic and international terrorism. The definitions of crimes, such as terrorist attacks on mass transportation facilities, biological weapons offenses, the harboring of terrorists, and assisting terrorists with material or financial support, have found specific delineation within the law.

Although these “new” crimes—and the penalties that attach to them—had been addressed in prior legislation, the Patriot Act comprises a single legislative repository wherein terrorism and terror-related activities are addressed. Typically, the act supplemented existing laws and increased the penalties connected to them. For example, the act provided for the establishment of alternative maximum sentences for acts of terrorism and raised the penalty for conspiracy to perpetrate an act of terrorism against the United States.

The Patriot Act has been cloaked in controversy almost since its inception, with parties on both sides of the debate claiming that the measures within the act lean to one extreme or the other. Critics do not agree: either the provisions are not doing enough or they go too far and infringe upon civil liberties and First Amendment rights. Defenders of the First Amendment contend that the Patriot Act has weakened citizens’ rights by allowing government access to confidential information and authorizing so-called “sneak and peak” search warrants without probable cause.

Several of the law's surveillance sections expired on December 31, 2005, although these were extended through March 10, 2006. Congress reauthorized the Patriot Act with little reform. On March 9, 2006, a day before the extension was due to expire, President Bush signed it into law.

The reauthorized act includes a four-year sunset clause on three specific provisions: the attainment of records (such as library records), the use of wiretaps to monitor communications, and the secret surveillance of non-U.S. citizens within the country. Each of these provisions can be lawfully executed without probable cause or suspicion. The sunset clause requires re-examination of these provisions prior to further reauthorization. President Barack Obama in 2011 signed an extension on the act's key provisions. And although parts of the act again expired in 2015, Congress passed the USA Freedom Act restoring and renewing these provisions through 2019.

Patriot Act provisions have been questioned on First Amendment grounds

Some provisions of the Patriot Act have fueled First Amendment challenges.

In Holder v. Humanitarian Law Project, 561 U.S. 1 (2010), the U.S. Supreme Court upheld provisions in the Patriot Act that prohibited the providing of service, training, and “expert advice or assistance” to groups designed as foreign terrorist organizations. In upholding the law, the Court rejected vagueness, free speech, and freedom of association challenges.

Another controversial part of the law has been section 215, which allows the Federal Bureau of Investigation to “make an application for an order requiring the production of any tangible things for an investigation to obtain foreign intelligence information...providing that such investigation of a United States person is not conducted solely upon the basis of activities protected by the first amendment to the Constitution.”

This provision originally included a gag order clause prohibiting anyone receiving a government-initiated request for records from ever disclosing that such a request had been received.

In 2013, through a leak of classified documents by Edward Snowden, it came to light that the National Security Agency had been engaged in a mass phone data collection program under Section 215, leading Congress to amend the law in 2015 to stop the program.

This article first published in 2009 and has been updated. The primary contributor was Dale Mineshima-Lowe, a professor at Birkbeck, University of London. It has been updated by the First Amendment Encyclopedia.