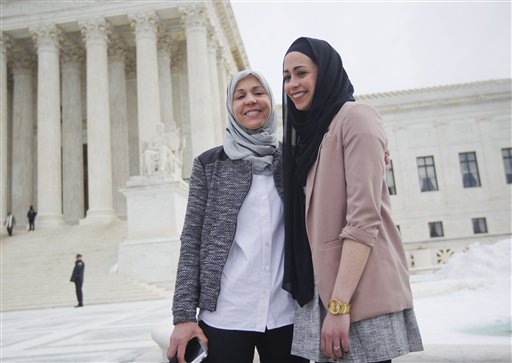 The Workplace Religious Freedom Act was first proposed in 1999, and has been introduced in Congress in subsequent years, but has not yet passed. The legislation would mandate accommodation for religious practices unless it places an "undue hardship" on the employer. In 2015, the Supreme Court ruled in EEOC v. Abercrombie and Fitch Stores that an employer could be liable under federal law if it refused to hire someone because it would have to accommodate a religious belief of that person. In that case, Samantha Elauf had worn a headscarf to an interview with a clothing retailer that had a "look" policy prohibiting its employees from wearing caps. In this photo Elauf, right, is with her mother Majda Elauf after arguments before the Supreme Court in 2015. (AP Photo, used with permission from the Associated Press)

The Workplace Religious Freedom Act was introduced in 1999 and in subsequent sessions of Congress but has not yet passed despite bipartisan support. The bill is intended in part to reverse the U.S. Supreme Court’s decision in Trans World Airlines v. Hardison (1977).

In that decision, the Court interpreted provisions of Title VII of the Civil Rights Act relative to employers’ obligations to employees whose religious duties conflicted with work responsibilities, so that employers should not have to bear more than a minimal cost.

In contrast, the proposed legislation would mandate such accommodation for religious practices except in cases of “undue hardship,” defined as “accommodation requiring significant difficulty or expense.” Such standards would be in line with those that employers are mandated to take in cases of employees with physical and emotional disabilities and would also more closely approximate standards that now apply to federal agencies under the Religious Freedom Restoration Act.

The proposal encountered some opposition from the American Civil Liberties Union (ACLU), which expressed concern that the law was not narrowly tailored. The ACLU wanted to limit the scope of the law to issues involving religious holidays and religious clothing and beards, as the group feared that it might otherwise be used to uphold religious proselytizing in the workplace that might interfere with the civil rights of homosexuals or members of minority religions who might be made to feel uncomfortable. The law was eventually narrowed, but still has not passed.

John Vile is a professor of political science and dean of the Honors College at Middle Tennessee State University. He is co-editor of the Encyclopedia of the First Amendment. This article was originally published in 2009 and updated by encyclopedia staff in 2021.