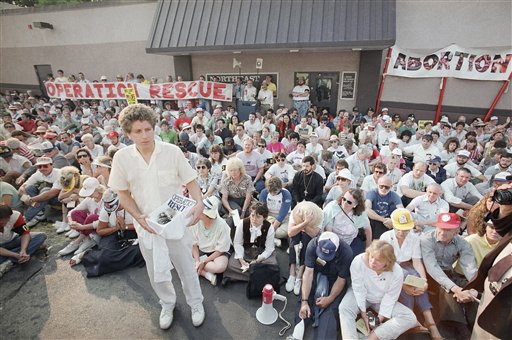 "Operation Rescue" organizer Randall Terry shows a crowd of some 350 anti-abortion protesters a human fetus during a massive sit-in outside the Northeast Women's Center in 1988 in Philadelphia. It was the second day of protests by the group at Philadelphia area clinics that perform abortions. Terry's group was part of the series of cases culminating in Scheidler v. National Organization for Women (2006). The cases dealt with the effects racketeering laws could have on First Amendment rights. (AP Photo/George Widman, used with permission from the Associated Press)

In Scheidler v. National Organization for Women, 547 U.S. 9 (2006), the Supreme Court ruled that RICO laws could not be invoked to challenge abortion clinic protests, which were otherwise protected by the First Amendment freedom of speech. The case had been in the courts for almost two decades.

The courts had been asked initially to rule on the attempt by the National Organization for Women (NOW) to invoke the use of the Racketeer Influenced and Corrupt Organizations Act (RICO) of 1970 against the activities of antiabortion protesters who physically blocked access to clinics, assaulted clinic staff, patients, and employees, and destroyed clinic equipment and records.

Although originally intended as a weapon against organized crime, in 1984 RICO was amended to apply more broadly to conduct unrelated to organized criminal activity. An important unresolved issue at the time was the extent to which RICO would infringe on protected First Amendment freedoms.

RICO can be used in criminal charges, civil suits for 'racketeering activity'

RICO prohibits persons engaged in interstate commerce “from conducting the affairs of the enterprise through a pattern of racketeering activity” or engaging in a conspiracy to do so. The law defines an “enterprise” as a group of associated individuals, and a “pattern of racketeering activity” requires proof of at least two actions that violate specified state or federal laws, such as murder, extortion, or fraud (upon which a RICO violation is then predicated). It is not necessary for the acts to have resulted in a conviction.

In addition to allowing the government to file criminal charges, RICO permits suits by private individuals, who, if successful, are entitled to collect triple damages and costs, including attorneys’ fees.

To win a civil RICO case, a plaintiff must prove that the defendant committed at least two or more of the predicate acts within 10 years. In 1986, NOW had filed a civil RICO action against Operation Rescue and its founder, Randall Terry; the Pro-Life Action Network (PLAN) and its director, Joseph Scheidler; and a number of other antiabortion groups and activists.

They alleged that the defendants had violated the Hobbs Act of 1948, a federal anti-extortion law that forbids anyone from interfering with interstate commerce “by robbery or extortion or attempts or conspires so to do, or commits or threatens physical violence to any person or property in furtherance of a plan or purpose” to violate the act.

The courts had to decide whether RICO was applicable in a suit against a defendant seeking to further ideological or political motives rather than economic gain.

RICO's application to antiabortion protesters spanned a series of cases

In National Organization for Women v. Scheidler (1992), the Seventh Circuit Court of Appeals held that the plaintiffs must show that the defendants were economically motivated, affirming a district court’s dismissal of NOW’s lawsuit in 1991.

In National Organization for Women v. Scheidler (1994), the Supreme Court reversed the appeals court and issued a brief opinion devoted to RICO’s language and congressional intent. Writing for a unanimous Court, Chief Justice William H. Rehnquist stated that RICO need not be restricted to conspiracies based on furthering economic interests. He noted that RICO suits against antiabortion protesters might interfere with their First Amendment rights to express their beliefs, but that this issue was not the one before the Court at that moment.

Four years later, in April 1998, a federal jury in Chicago found the defendants guilty of violating numerous counts of the Hobbs Act. After a seven-week trial and three days of deliberation, the jury awarded the plaintiffs $85,926. Under the provisions of RICO, the court tripled this amount, resulting in a judgment of slightly more than $250,000 to compensate the clinics for expenses they had incurred in enhancing security.

PLAN appealed, arguing that it had not violated the Hobbs Act because it had not “obtained” clinic property, as required under the act, and therefore was not guilty of the predicate offense of extortion. In National Organization for Women v. Scheidler (2001), the Seventh Circuit Court of Appeals rejected PLAN’s argument, ruling that defendants may be found guilty of violating the Hobbs Act for disrupting or interfering with the victim’s business; it is not necessary that the defendants physically obtain the victim’s property. The appellate court affirmed the jury award.

Supreme Court ruled that antiabortion group was not involved in extortion

The Supreme Court agreed to hear the case and reversed in Scheidler v. National Organization for Women (2003). The Court, in an 8-1 decision, held that PLAN was not guilty of extortion because it had not obtained, that is, received, the abortion providers’ property as required under the Hobbs Act; interference with or disruption of such property does not constitute extortion, even if it succeeds in closing down a clinic.

Because PLAN had not committed the predicate act of extortion, it had not violated the Hobbs Act. The Court overturned the jury’s verdict in NOW’s favor and vacated the district court’s order restricting PLAN from blockading abortion clinics and harassing abortion providers and their patients.

Although the Supreme Court’s ruling absolved PLAN of the predicate act of extortion, NOW continued to argue that PLAN remained liable under RICO for violating the Hobbs Act by committing acts or threats of violence to persons or property associated with abortion clinics; therefore, it claimed, the district court order was still valid.

NOW had not previously raised this issue before the Supreme Court. The appellate court held that because the Supreme Court had not considered this issue, the case should be sent back to the district court to allow it to determine whether such instances of threats or acts of violence constituted predicate acts under the Hobbs Act. PLAN sought Supreme Court review of this decision and the Court agreed to hear the case (again).

In Scheidler v. National Organization for Women (2006), the high court ruled against NOW, rejecting its attempt to hold PLAN accountable for its antiabortion activities under RICO.

The Court held that threatening or committing acts of physical violence that were unrelated to extortion or robbery were not within the ambit of the Hobbs Act. According to the Court, the “plan or purpose” specified in the statute must be interpreted as a plan or purpose that affects interstate commerce through robbery or extortion, not simply a plan or purpose related to commerce.

This decision ended NOW’s attempt to use a civil RICO claim to halt the actions of the antiabortionists against women seeking abortions and on the clinics seeking to provide them.