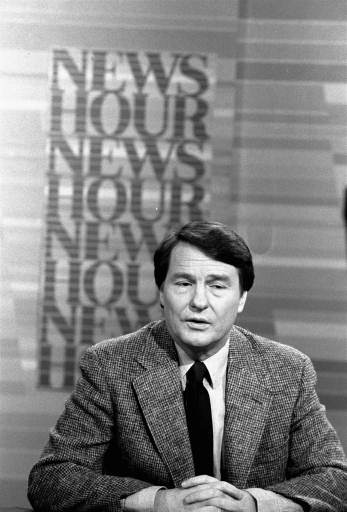 Jim Lehrer, a co-anchor of the PBS television news program, "The MacNeil-Lehrer News Hour", readies for a 1984 broadcast. Until 1984, noncommercial stations like PBS were banned from editorializing. In FCC v. League of Women Voters of California (1984), the Court said that such rules violated the First Amendment.  (AP Photo/Ira Schwarz, used with permission from the Associated Press)

Noncommercial radio and television stations could not 'editorialize'

Congress enacted the 1967 Public Broadcasting Act to encourage the development of commercial-free radio and television programming. Part of the act created the Corporation for Public Broadcasting, a nonprofit entity entrusted with distributing federal money to noncommercial stations.

Section 399 of the act barred any station that received money under it from engaging in “editorializing.” Pacifica Corporation, which owned several noncommercial stations, along with a listener and the League of Women Voters of California, challenged the restriction as a violation of the First Amendment.

A district court ruled in favor of the First Amendment challenge, and the Supreme Court agreed. Writing for the Court in a 5-4 decision, Justice William J. Brennan Jr. ruled that Section 399 was an attempt to directly regulate the content of speech that was at the heart of the First Amendment. Moreover, he argued that efforts to suppress editorial speech deprived listeners of commentary about matters of public importance.

Finally, the Court rejected the claim that Section 399 was constitutional because it was a valid use of the government’s spending power to decide how to disburse its money.

Overall, Federal Communications Commission v. League of Women Voters of California affirmed that the government may not use public funds to suppress or encourage the free-speech rights of others.

Although Legal Services Corp. v. Velazquez (2001) somewhat supported this principle, decisions in Rust v. Sullivan (1991) and National Endowment for the Arts v. Finley (1998) allowed the government to appropriate money in order to limit the specific viewpoints for which it was paying.