By Robert A. Kahn
Other articles in Issues Related to Speech, Press, Assembly, or Petition 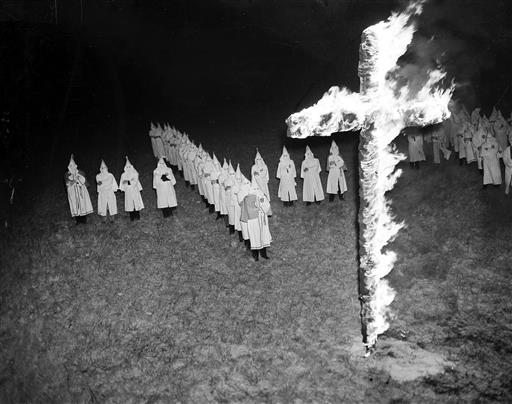 In this Jan. 30, 1939 photo, members of the Ku Klux Klan, wearing white hoods and robes, watch a burning cross in Tampa, Florida.Cross burning, which has been used as a form of intimidation against African Americans and Jews, has been defended in the courts on free speech grounds. (AP Photo, used with permission from The Associated Press.)

Cross burning, which has been used as a form of intimidation against African Americans and Jews, has been defended in the courts on free speech grounds.

The practice dates back to 14th century Scotland, where tribes burned crosses as signaling devices. The modern use of cross burning is directly linked to a revival of the Ku Klux Klan in the early 20th century. An earlier version of the Klan, which was created by former Confederate officers to impede Reconstruction in the South and to terrorize newly freed slaves, did not burn crosses.

D.W. Griffith’s controversial, if popular, 1915 film The Birth of a Nation played a crucial role in the revival of the Klan, which had declined after Reconstruction. In the film, Klan members chase and catch an African American man who had pursued a white woman, and ultimately lynch him in front of a burning cross.

Not long after the film’s appearance, a cross was burned on Stone Mountain, outside Atlanta, Georgia. Shortly thereafter, a cross was burned in nearby Marietta, Georgia, to celebrate the lynching of Leo Frank, a Jewish factory manager who had been accused of raping and killing a white Christian girl.

As the Klan grew in numbers and influence, cross burning became an important ritual of group solidarity. At Klan gatherings, members, dressed in hoods, sang “Onward Christian Soldiers” and “The Old Rugged Cross.”

Crosses were burned not only at lynchings but also more generally to terrorize African Americans, Roman Catholics, Jews, and others hated by the Klan. As the Klan declined in the late 1920s and 1930s, intimidation became the primary but not exclusive use of the cross.

During the civil rights era beginning in the 1950s, white supremacists burned crosses to express opposition to desegregated schools, to frighten civil rights workers, and to show support in 1960 for the Republican presidential candidate, Richard M. Nixon (who declined the support). In addition, people with no Klan affiliation have burned crosses on the lawns of African Americans moving into all white neighborhoods.

Since the 1950s, a number of states, including Virginia, have passed laws banning cross burnings. The constitutionality of these laws did not reach the Supreme Court until the early 1990s, and then, in slightly more than a decade, the Court issued two seminal rulings on the subject. These decisions, R.A.V. v. St.Paul (1992) and Virginia v. Black (2003), addressed the constitutionality of laws banning cross burnings and gave the Court a chance to discuss the role of the practice in U.S. history.

In R.A.V., Justice Antonin Scalia held for a majority of the Court that the Bias-Motivated Crime Ordinance of St. Paul, Minnesota, was unconstitutional because it targeted the display of symbols that inspired hatred based on “race, color, creed, religion or gender” but did not take other characteristics into consideration.

Thus, Scalia argued, the statute was viewpoint discriminatory as it allowed one side of a debate to fight “freestyle” while the other had to rely on stricter “Marquis of Queensbury rules.” Although Scalia deplored cross burning, he did not discuss its historical context in his opinion.

In Virginia v. Black, the Court held that states could ban cross burning undertaken with the intent to intimidate. In the opinion for the Court, Justice Sandra Day O’Connor provided ample historical background.

She wrote several pages outlining the role of cross burning in terrorizing African Americans and other opponents of the Klan. She used historical evidence to support the ruling that a provision in the Virginia law was unconstitutional in allowing a jury to infer intent to intimate solely from the cross burning itself. This evidence led her to conclude that crosses were sometimes burned for expressive.

Dissenting in the case, Justice Clarence Thomas faulted O’Connor’s conclusion that a cross could have expressive meaning. Relying on a variety of evidence, including testimony from a victim of cross burning and newspaper articles from 1952, when Virginia passed its law, Thomas held that intimidation was the only meaning cross burning could have in the United States.

After R.A.V., several state courts invalidated cross burning laws on the basis that cross burning, as an expressive activity, is protected by the First Amendment.