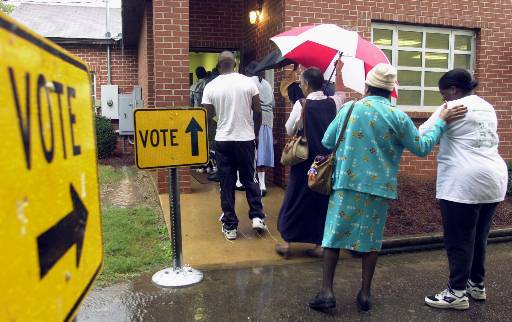 In this photo, a line of voters stand in the rain outside this Montgomery, Alabama, polling place as they wait to cast their ballots in the 2000 general election. In exit polling, pollsters ask voters as they leave the polls whom they voted for and sometimes other questions as well. The media argue that exit polling is a form of expression protected by the First Amendment. (AP Photo/Dave Martin, used with permission from the Associated Press)

In exit polling, pollsters ask voters as they leave the polls whom they voted for and sometimes other questions as well. The media argue that exit polling is a form of expression protected by the First Amendment. States that seek to regulate the practice contend that the practice disrupts the electoral process.

The Supreme Court upheld a Tennessee law that prohibited the solicitation of votes and the display of campaign literature within 100 feet of the entrance to a polling place in Burson v. Freeman (1992). Although acknowledging that the statute was a content-based restriction on political speech, the majority of the sharply divided Court ruled that the law survived strict scrutiny.

Some lower courts have upheld exit polling under the First Amendment

Supporters of restrictions on exit polling cite Burson as a favorable precedent. Critics note that the Tennessee law at issue in Burson was not applied to exit polling.

Many lower courts have invalidated laws that restrict exit polling. In Daily Herald Co. v. Munro (1988), the 9th U.S. Circuit Court of Appeals invalidated a Washington law that restricted exit polling within 300 feet of polling places. The appeals court determined that the content-based law did not survive strict scrutiny because it prohibited even “nondisruptive exit polling.” The court concluded that the law was “content-based, overbroad and not the least restrictive means of keeping peace, order, and decorum at the polls.”

Despite these rulings, states continue to regulate exit polling, insisting that it protects the integrity of the electoral process and prevents voter intimidation. Recent court decisions — CBS v. Cobb (S.D.Fla.2006) and ABC v. Heller (U.S. Dist. Nev. 2006) — have enjoined the enforcement of such statutes in Florida and Nevada.