By Eric Kasper
Other articles in Issues Related to Speech, Press, Assembly, or Petition 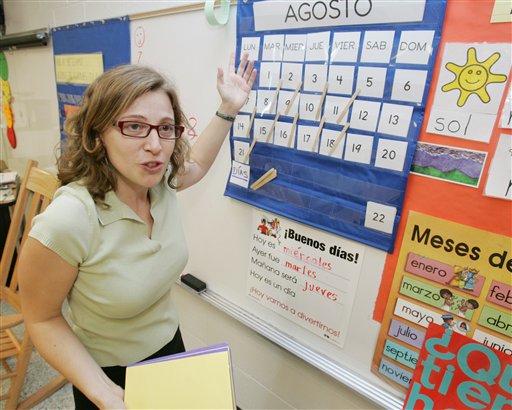 In response to state laws prohibiting the teaching of foreign languages, Supreme Court reasoned that the right to teach and learn foreign languages is protected by the First Amendment. In this photo, Unidos Dual Language Charter School teacher Rosa Pellicer talks about her class in Georgia in 2006. The school was Georgia's first bilingual school. (AP Photo/Ric Feld, used with permission from the Associated Press)

In a series of cases from 1923 to 1927, the Supreme Court held that the Constitution protects the right to learn and teach foreign languages. Although the Court initially found this to be a substantive due process right implicit in the 14th Amendment, later courts have also attached this right to the First Amendment.

Many states prohibited teaching foreign languages during World War I

During World War I, a wave of nativism spread across the United States, aimed particularly at German-Americans. This nativism was further exacerbated by the Bolshevik Revolution in Russia in 1917. To promote a common culture and language, over half the states passed laws prohibiting the teaching of foreign languages.

For example, a Nebraska statute barred the teaching of languages other than English in any public or private school until “after a pupil shall have attained and successfully passed the eighth grade.”

The first to reach the Supreme Court, Meyer v. Nebraska (1923), involved a teacher at a Lutheran school who was fined $25 for offering German instruction. Justice James C. McReynolds, writing for the Court, struck down the Nebraska law for violating the liberty guaranteed by the due process clause of the 14th Amendment. According to McReynolds, the “American people have always regarded education and acquisition of knowledge as matters of supreme importance which should be diligently promoted.”

In Bartels v. Iowa (1923), the Supreme Court struck down similar statutes in Iowa and Ohio. Four years later, the Court was confronted with a regulation in the federal territory of Hawaii that required any school that taught in languages other than English and Hawaiian to pay for special permits and fees.

The regulation also directed the times of foreign language instruction and designated the textbooks that could be used. In Farrington v. Tokushige (1927), the Court held that this regulation violated the due process clause of the Fifth Amendment. Justice McReynolds, again writing for the Court, characterized the law as infringing on the right to learn foreign languages.

The Supreme Court subsequently reasoned that the right to teach and learn foreign languages is a penumbral right protected by the First Amendment.

Conversely, the 9th U.S. Circuit Court of Appeals used Meyer to invalidate Arizona’s English-only requirement under the First Amendment in Yniguez v. Arizonans for Official English (1995), although the Supreme Court reversed this decision on other grounds in 1997.

This article was originally written in 2009. Eric Kasper, PhD, is a professor of political science and the director of the Center for Constitutional Studies at the University of Wisconsin-Eau Claire. He has authored or co-authored multiple scholarly publications on First Amendment content, including “Absolute Freedom of Opinion and Sentiment on All Subjects: John Stuart Mill’s Enduring (and Ever-Growing) Influence on the Supreme Court’s First Amendment Free Speech Jurisprudence"; “Public Universities and the First Amendment: Controversial Speakers, Protests, and Free Speech Policies”; and “Did Five Supreme Court Justices Go ‘Completely Bonkers’?: Saul Goodman, Legal Advertising, and the First Amendment Since Bates v. State Bar of Arizona."