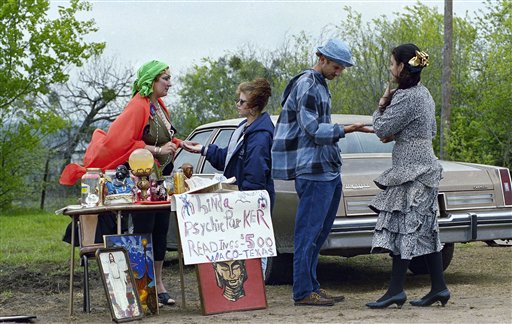 In this photo, palm readers Zena Harrs, in orange, and Linda Parker, wearing dress, far right, both of Waco, Texas, read palms of Rhiannon Gardner, second from left and Jamie Blair in 1993. Cities have tried to restrict fortune telling, but fortune tellers argue that regulations restrict their First Amendment rights. (AP Photo/Charles Krupa, used with permission from the Associated Press)

Any number of municipalities have sought to limit fortune telling, clairvoyance, palmistry, and related activities, contending that such practices amount to attempts to defraud unsuspecting consumers. Fortune telling practitioners counter, however, that such prohibitions violate their First Amendment free expression rights. They argue that these content based ordinances cannot withstand constitutional scrutiny.

For years, the courts gave government officials a wide degree of deference in this area. In Davis v. Ohio (1928), the Ohio Supreme Court upheld a state law regulating fortune telling. Responding to a free speech defense, the court replied that “liberty of speech is not license to speak anything that one pleases freed from all criminal or civil responsibility.”

The Ohio court also refused to recognize any religious based defense, citing the U.S. Supreme Court’s polygamy decision Reynolds v. United States (1879) for the principle that “a party’s religious belief cannot be accepted as a justification for his committing an overt act made criminal by the law of the land.”

The U.S. Supreme Court declined to review Davis. Still other courts reasoned that cities could limit fortune telling because even if such activities constituted expression, it amounted to no more than commercial speech, which did not receive First Amendment protection at all until the mid-1970s.

In recent years, the courts have viewed restrictions on fortune telling with great skepticism. These courts recognize that the laws restrict speech based on content and must survive strict scrutiny. In Argello v. City of Lincoln (1998), the 8th U.S. Circuit Court of Appeals struck down a Lincoln, Neb., fortune telling ban, finding that the city failed to show any compelling interest in its law.

“Government is not free to declare certain beliefs — for example, that someone can see into the future — forbidden,” the court wrote. “Citizens are at liberty to believe that the earth is flat, that magic is real, and that some people are prophets.”

“Telling fortunes or giving advice based on astrology (without more) is speech-for-profit, not commercial speech,” the court wrote. “If the City could ban any statement or belief debunked by science, the First Amendment would be a cruel hoax, more worthy of Orwell’s double-thinking Oceania than the United States of America.”

Despite this strong body of precedent, some jurisdictions continue to impose restrictions on fortune telling. For example, in May 2007 the Livingston Parish Council in Livingston, Louisiana, voted unanimously to ban fortune telling.

However, the 4th U.S. Circuit Court of Appeals upheld a Chesterfield County, Va., ordinance that regulated the activities of fortune tellers based on the professional speech doctrine.

“Under the professional speech doctrine, the government can license and regulate those who would provide services to their clients for compensation without running afoul of the First Amendment,” the 4th Circuit wrote in Moore-King v. County of Chesterfield (4th Cir. 2013).

While the professional speech doctrine provides authority for governmental regulators, the key question moving forward is whether many ordinances regulating fortune tellers can survive court scrutiny in the wake of the U.S. Supreme Court’s decision in Reed v. Town of Gilbert (2015). In Reed, the Supreme Court not only reaffirmed but also enhanced the applicability of the content discrimination principle in free speech cases.

The development of the professional speech doctrine and the recent decision in Reed present a nuanced picture of First Amendment law for city and county regulators who wish to regulate fortune tellers.

First Amendment commentator Gene Policinski has written that fortune tellers, astrologers, and the like “ought not to have government looking over their shoulders” because “education, not regulation, would seem a better way of dealing with the future of star-driven prognostication or colored bits of paper that purport to predict.”