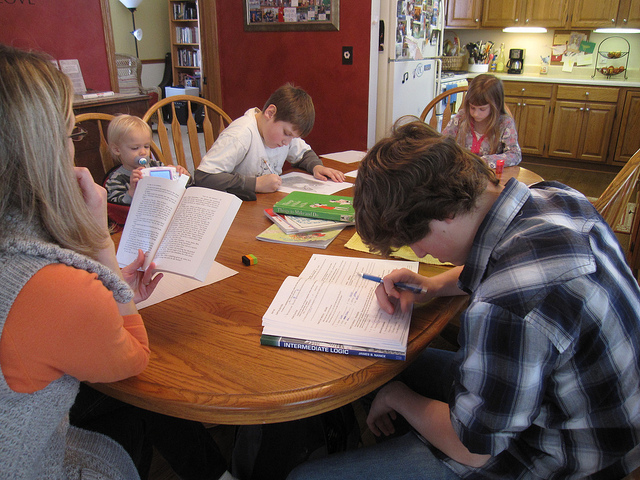 Parents often hope that by homeschooling their children they can counter what they perceive to be secularizing influences in public schools. Homeschooling, pictured here, in America falls within parents’ and students’ protected First Amendment rights of free speech and the free exercise of religion. (Photo of homeschooling Gustoff family in 2012 in Iowa by IowaPolitics.com on Flickr, CC BY-SA 2.0)

Although no specific Supreme Court case deals directly with homeschooling, the practice of educating children at home, a number of precedents connect this endeavor with parents’ and students’ rights of free speech and the free exercise of religion. Such First Amendment rights may also be protected by the doctrine of privacy, either alone or in conjunction with the Ninth Amendment, and concern for due process.

States have primary authority over education

In early America, most families educated their children at home. The first state to require school attendance was Massachusetts, which adopted a compulsory education law in 1642, although it did not enact a compulsory attendance law until 1852. States have the primary authority over education. They exercise this authority through their police powers, which are constitutionally grounded in the Tenth Amendment. As the Supreme Court recognized in its desegregation decisions, most notably in Brown v. Board of Education (1954), the individual states’ responsibility for education has grown considerably with the increasing importance of education in modern times.

The homeschooling movement has expanded in recent years, primarily among conservative Protestants, although the movement is not limited to conservatives or Protestants. Parents often hope that by homeschooling their children they can counter what they perceive to be secularizing influences in public schools, some of which they attribute to Supreme Court decisions such as Engel v. Vitale (1962) and Abington School District v. Schempp (1963), which limited devotional prayer and Bible reading in schools.

Court has recognized some First Amendment rights of parents

In Meyer v. Nebraska (1923), the Court ruled that a state could not prohibit a parochial school from teaching German to students. In Pierce v. Society of Sisters (1925), the Court struck down a law that prohibited parents from sending their children to parochial schools. Basing its judgment chiefly on the due process clause of the Fourteenth Amendment, the Court observed, “The child is not the mere creature of the State; those who nurture him and direct his destiny have the right, coupled with the high duty, to recognize and prepare him for additional obligations.” In Farrington v. Tokushige (1927), the Court also declared that a state’s control over the “intimate and essential details” of private schools was limited.

The Court further recognized the rights of religious parents when it ruled, in Wisconsin v. Yoder (1972), that Amish parents have the right to take their children out of public schools after the children have completed the eighth grade. Other decisions — Mueller v. Allen (1983), for example, which upheld income tax deductions for parents of children in parochial schools against establishment clause challenges — have recognized that the operation of state schools saves state tax dollars, a principle that could also be applied to home schooling.

All states recognize right to homeschool

Today all 50 states recognize the rights of parents to educate children at home. Most legal scholars agree that states are entitled to enact minimal training requirements for parents who homeschool their children and to prescribe the number of hours that students must devote to schoolwork, while rejecting schemes that effectively attempt to preclude alternate forms of education.