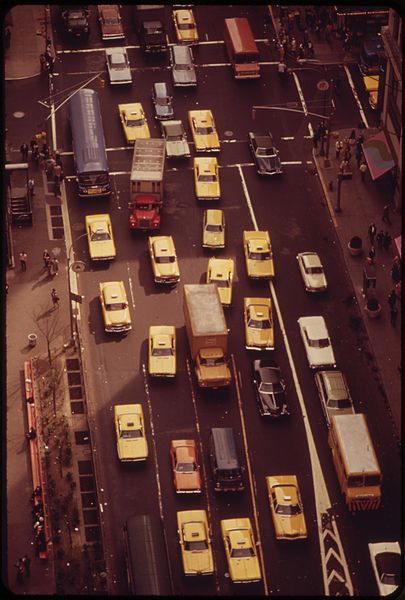 While motorists have argued that horn honking is a First Amendment-protected form of expression, courts have said otherwise. One horn honking case involved a traffic gridlock in Manhattan, like the one shown here. (Image of traffic in Manhattan via Environmental Protection Agency on Wikimedia Commons, public domain)

The honking of automobile horns has led to several First Amendment challenges in the courts. Generally, the issue arises after an individual has been cited under a city ordinance for honking a car horn for reasons unrelated to poor driving by a fellow motorist. The individual then claims a First Amendment right to honk as a means of protest.

The courts have reached divergent results in such cases. In State v. Compas (Mont. 1998), the Supreme Court of Montana ruled that Lori Compas’s free expression rights were not violated when she was charged with disorderly conduct after repeatedly blowing her horn to protest the location of a park for recreational vehicles near the Yellowstone River. The court ruled that the horn honking in this situation “did not constitute a protest to government of government acts which would be entitled to protection under the First Amendment.”

In Weil v. McClough (S.D.N.Y. 1985), a federal district court in New York rejected Charles A. Weil’s First Amendment challenge to a city law stating that “No person shall operate or use or cause to be operated or used any claxon installed on a motor vehicle, except as a sound signal of imminent danger.” Weil was cited and fined for violating the ordinance after repeatedly honking his horn while stuck in Manhattan’s traffic gridlock. Weil argued that horn honking was a form of expressive conduct protected by the First Amendment.

The federal district court rejected the argument, determining that the law furthered two substantial state interests—reducing noise and maximizing the usefulness of car horns. The court also noted that the ordinance did not target the content or viewpoint of individuals honking their horns. The federal court also cited the Supreme Court’s famous decision Kovacs v. Cooper (1949), in which the high court upheld a Trenton, New Jersey, ban on the use of sound trucks because of excessive noise.

However, at least one lower court has recognized a free expression challenge to a horn-honking law, albeit on state constitutional law grounds. The Oregon Court of Appeals, in City of Eugene v. Powlowski (Ore. App. 1992), ruled that a city law prohibiting horn honking for purposes other than a reasonable warning to another vehicle violated the free expression guarantee of Article 1, section 8 of the state constitution. The court determined that the law was unconstitutionally overbroad: “For example, it is broad enough to make honking unlawful if a motorist honked his horn as a friendly greeting to a bystander as he drives by a residence or any other circumstance when honking is used as a form of communication.”