By Alex Aichinger
Other articles in Issues Related to Speech, Press, Assembly, or Petition 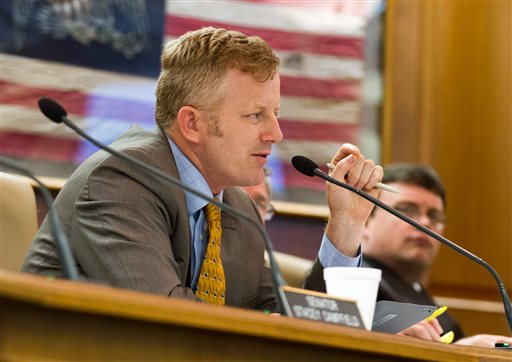 The Supreme Court has ruled that decisions about how to use student activity fees must be viewpoint neutral. Some students have objected that student activity fees force them to support viewpoints with which they disagree. In this photo, Tennessee state Sen. Stacey Campfield speaks at a Senate subcommittee hearing in 2013 about University of Tennessee fees being used to pay for speakers at a student-initiated Sex Week program. Campfield suggested that students should be able to opt out of having their student activity fees being used to pay for speakers they find objectionable. (AP Photo/Erik Schelzig, used with permission from the Associated Press)

Once considered a fair method of improving the educational environment of a university for all students, student activity fees have become the subject of divisive campus debate and student lawsuits. Some students have challenged student activities on First Amendment grounds, contending that they should not be forced to contribute money to organizations whose viewpoints they do not support.

Student fees began as a rather noncontroversial way of raising funds to provide university students with campus amenities not covered by tuition. Most public and private colleges and universities had fees, often student-imposed, to cover the costs of the student union, intramural sports programs, student newspaper, and student organizations.

This generally benign use of student fees began to undergo a qualitative change in the 1960s and 1970s. Fueled by events such as the civil rights movement, Vietnam War, Berkeley Free Speech Movement, and Ralph Nader’s formation of Public Interest Research Groups on university campuses nationwide, activist students and faculty began to view student fees as funding mechanisms to advance specific ideological or political goals.

Students mount First Amendment challenges over use of activity fees

Campus fees were used to promote off-campus causes, including the direction of U.S. societal and political issues such as abortion, feminism, consumerism, gay rights, and social justice.

Some students began to challenge the use of their mandatory fees to support causes with which they did not agree. When the lower state and federal courts produced conflicting decisions about student fees, the Supreme Court decided to hear Rosenberger v. Rectors and Visitors of the University of Virginia (1995) and Board of Regents of the University of Wisconsin System v. Southworth (2000) in order to clarify the constitutional status of mandatory student fees, how they were distributed, and how they were approved.

The Rosenberger decision established the governing constitutional principle, viewpoint neutrality, to be applied to questions about mandatory student fees. In this case, the Student Activities Fund of the University of Virginia refused to reimburse the printing costs for an otherwise eligible Christian campus publication because of the magazine’s “religious” perspective. The Court ruled 5-4 that the university’s decision was a “blatant” violation of the First Amendment.

Once a university decides to encourage and fund student activities “related to the educational purpose of the University,” it has created a public forum and cannot censor “particular views taken by speakers on a subject” — that is, it cannot exercise viewpoint discrimination. The university must establish clear and objective funding standards for student organizations seeking reimbursement through mandatory student fees collected by the university, and it must establish a procedure for funding that eliminates the possibility of undue discretion in arriving at funding decisions — that is, it must exercise viewpoint neutrality. In short, if mandatory student fees create a potential source of funds made available to student organizations, those funds must be available to all such organizations.

The Southworth decision reaffirmed the standard of viewpoint neutrality and extended the principle to questions about the funding procedure of mandatory student fees.

The University of Wisconsin authorized use of a student referendum to determine whether a mandatory student fee should be collected to fund the Wisconsin Student Public Interest Research Group. The funding proposal passed, and the mandatory fee was imposed on all full-time students.

But Scott H. Southworth and other students challenged the fee as a violation of their free speech, because they were compelled to finance viewpoints with which they did not agree. The Court agreed that, for mandatory student fees, it is “inevitable that the fees will result in subsidies to speech which some students find objectionable and offensive.”

However, the standard of viewpoint neutrality is met by the funding process itself, as outlined in Rosenberger. Although the university could decide to establish a refund policy for individual students who object to funding certain advocacy groups, such an arrangement is not required by the Constitution.