By Judith Haydel
Other articles in Issues Related to Speech, Press, Assembly, or Petition, Categories of Laws and Proposed Laws 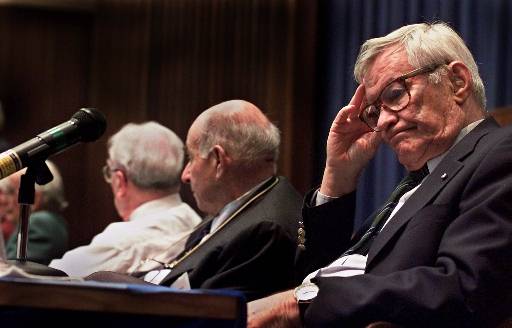 UCLA physicist David Saxon, right, waits his turn to speak during the 50th anniversary retrospective of the "University Loyalty Oath Symposium" in 1999 in Berkeley, California. Saxon was one of 31 faculty fired from the University of California in 1950 for refusing to sign a "loyalty oath" disavowing any party advocating the overthrow of the U.S. government. Faculty refused to sign not because they were communists, but on the belief that compliance infringed on academic independence. (AP Photo/Ben Margot, used with permission from the Associated Press)

A loyalty oath is a declaration by an individual of allegiance to a government and its institutions and a disavowal of support for foreign ideologies or associations.

The constitutionality of loyalty oaths is part of the larger struggle between the power of government to regulate perceived threats to national security and the First Amendment rights of citizens to speak and associate freely.

Oaths of loyalty were an important tool in early America

When the United States became a self-governing republic, oaths of loyalty to the new political system became an important tool in helping sustain it.

Article 2, 1, cl. 8 of the U.S. Constitution requires the President to take an oath of office. Article 4, cl. 3 requires oaths of office for members of the U.S. Congress; the federal judiciary; and officers of state legislative, executive, and judicial branches of government.

Loyalty oaths also play an important part in the naturalization process. Persons born in the United States are citizens by birth, but resident aliens who wish to become citizens must first swear an oath of allegiance to the United States.

During and after World Wars, government enacted loyalty oaths for employees

Loyalty oaths have been regarded as essential tools in the defense of the United States from its enemies from both within and outside the country, especially in times of war.

During and after World War I and World War II and during the Cold War, widespread fear of communism, fascism, and socialism, and the concomitant anxiety of ensuring that Americans were and would remain loyal to the United States, led federal and state governments to enact legislation to weed out subversive organizations and those who supported them.

It also enacted statutes — such as the Smith Act of 1940 and the McCarran Internal Security Act of 1950 — seeking to stem the rise of communism in the United States.

The Pledge of Allegiance is a form of loyalty oath.

State laws requiring students to salute the American flag and recite the Pledge of Allegiance in public schools led to the Supreme Court’s landmark decision in West Virginia State Board of Education v. Barnette (1943), striking down West Virginia’s mandatory flag salute statute as a violation of the First Amendment. The continued popularity of the Pledge of Allegiance as an avowal of patriotism is apparent in the ongoing conflict over its wording.

Not all loyalty oath cases based on First Amendment

The Court has decided many cases involving public employee loyalty oaths, but not all were decided solely on First Amendment grounds. Some were based on due process rights, and others were based on the Fifth Amendment’s privilege against self-incrimination.

In fact, when the Supreme Court first interpreted the constitutionality of loyalty oaths right after the Civil War, it declared them ex post facto laws and bills of attainder.

Government can constitutionally require loyalty oaths of public employees, but the wording of the oath is all-important.

To survive constitutional muster, the oath must specifically define and punish behavior that constitutes a clear and present danger to a substantial government interest.

Three noteworthy cases in which the Court struck down state loyalty oaths as unconstitutionally vague are:

Many cases dealing with loyalty oaths arose in academic settings, where the issues of academic freedom and the freedom to teach and to learn were paramount.

In Cole v. Richardson (1972), the Court set out four conditions an oath must meet to survive constitutional muster: