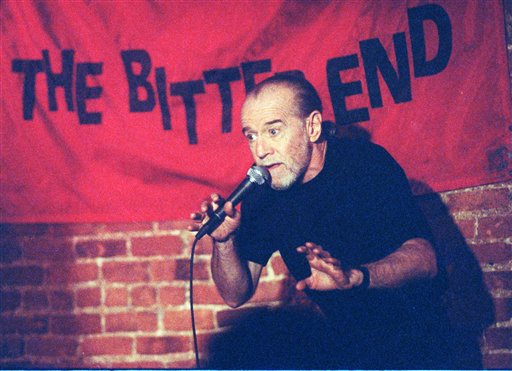 George Carlin's "Filthy Words" monologue on an afternoon radio broadcast prompted a father to file a complaint with the Federal Communications Commission, contending minors should not be exposed to profane and indecent comments. The Supreme Court upheld the FCC's action in the case, reaffirming the right of the government to regulate broadcast media. The broadcast media has traditionally had less First Amendment protection than other forms of media. (AP Photo of George Carlin by Ed Bailey, reprinted with permission from The Associated Press.)

The decision reaffirmed the notion that the government has a freer hand to regulate the broadcast medium than other forms of media.

The case began in October 1973 when a man, who was riding in a car with his minor son, heard an afternoon radio broadcast of comedian George Carlin’s “Filthy Words” monologue.

The man filed a complaint with the Federal Communications Commission (FCC), contending that minors should not be exposed to such profane and indecent comments. The FCC agreed and issued an order in February 1975 pointing out that the Pacifica Foundation, which owned the New York radio station that broadcast Carlin’s monologue, could have been subjected to administrative sanctions.

The FCC did not impose formal sanctions, but placed a letter in the station’s file that could be used to enhance future punishments. The commission determined that “the language as broadcast was indecent and could be prohibited by 18 U.S.C. section 1464,” which enjoins the radio broadcast of “obscene, indecent or profane” speech.

Court ruled in favor of FCC

Stevens characterized the constitutional issue as “whether the First Amendment denies government any power to restrict the public broadcast of indecent language in any circumstances.”

Stevens reasoned that the government had greater power to regulate the sexual speech at issue in this case for at least two reasons based on content and context.

He reasoned that the broadcast medium was “uniquely accessible to children,” and he emphasized the indecent speech was broadcast during daytime hours.

Justice Lewis F. Powell Jr., joined by Justice Harry A. Blackmun, concurred and agreed with much of Stevens’s analysis except the proposition that the First Amendment allowed the government to decide that certain forms of speech are more “valuable” than others.

Justice William J. Brennan Jr., joined by Justice Thurgood Marshall, dissented vehemently, accusing the majority of “misapplication of fundamental First Amendment principles.” Brennan contended that if the First Amendment protected Robert Paul Cohen from wearing a jacket bearing the words “Fuck the Draft” in a California courthouse, at issue in Cohen v. California (1971), then it should also protect the radio station in this instance.

Brennan criticized the plurality for allowing the suppression of nonobscene speech that adults and older minors should be able to listen to if they wished. He also accused the majority of failing to appreciate “cultural pluralism”: “It is only an acute ethnocentric myopia that enables the Court to approve the censorship of communications solely because of the words they contain.”

Justice Potter Stewart, joined by Justices Byron R. White, Brennan, and Marshall, dissented on statutory grounds. Stewart argued that the prohibition in 18 U.S.C. section 1464 against “obscene, indecent or profane language” should be limited to reaching just obscene expression, as the Court had done with a similar federal statute in Hamling v. United States (1974).

In 2008 the Court would revisit the issue of broadcast indecency in Federal Communications Commission v. Fox Television Stations.