By Ojan Aryanfard
Other articles in Issues Related to Speech, Press, Assembly, or Petition 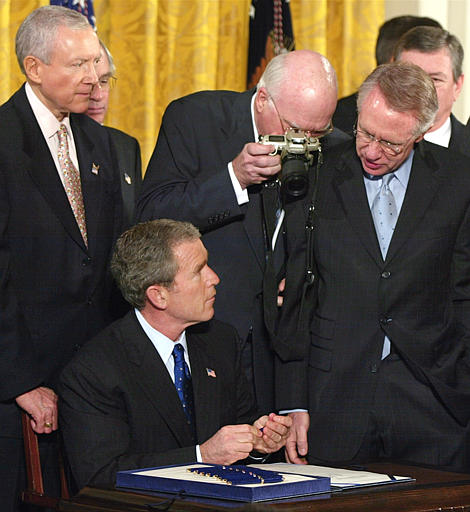 Despite the absolute language of the First Amendment, wars, threats of wars, and perceived risks to national security have prompted the government to, at times, restrict freedom of speech and other First Amendment freedoms throughout U.S. history. One controversy arose over certain provisions of the USA Patriot Act, which Congress passed forty-five days after the 9/11 attacks. In this photo, Sen Patrick Leahy D-Vt. peers over the shoulder with his camera as President Bush signs the Patriot Act Bill during a ceremony in the White House East Room, Friday, Oct. 26, 2001. The law gave police unprecedented authority to search people's homes and business records secretly and eavesdrop on telephone and computer conversations and the government said it would begin using the new powers immediately. (AP Photo/Doug Mills, used with permission from the Associated Press)

Despite the absolute language of the First Amendment, wars, threats of wars, and perceived risks to national security have prompted the government to, at times, restrict freedom of speech and other First Amendment freedoms throughout U.S. history.

A prime example is the legislation passed only seven years after the adoption of the Bill of Rights, including the First Amendment, in 1791. In 1798 the Federalist Congress, fearful of an impending, full-blown war with France, adopted the Sedition Act, which attempted to stifle any speech that criticized the president, who was conducting an undeclared conflict with France at sea. The Federalist Party justified the Sedition Act as a measure needed to prevent threats to national security from within the country.

During the Civil War, President Abraham Lincoln suspended the writ of habeas corpus in some parts of the North, especially those that were unstable, and the Confederate government acted in a similar fashion.

World War I saw the adoption of the Espionage Act of 1917 and the Sedition Act of 1918, which led to the first Supreme Court decisions, among them Schenck v. United States (1919) and Abrams v. United States (1919), that punished political dissidents because their speech allegedly presented a clear and present danger to national security and war efforts.

During World War II, the government incarcerated Japanese Americans. That war and the Cold War that followed spurred adoption of the Smith Act (making it illegal to call for the overthrow of the U.S. government), intrusive congressional investigations into personal beliefs and associations, and other efforts to suppress domestic Communism.

The prolonged U.S. involvement in the Vietnam War and its high death toll prompted the eruption of protests nationwide, along with efforts to suppress them. Such issues were rekindled in the aftermath of the al-Qaida attacks on the United States of September 11, 2001, and the U.S. responses to those events.

Periodically, the Supreme Court has examined whether the government can restrict speech to further the compelling interests of national security. In doing so, the Court has recognized that national security, as a governmental interest, does justify restrictions on First Amendment rights. In the landmark free press decision Near v. Minnesota (1931), the Court established a general rule against prior restraints on expression. However, the Court did note that the government could shut down a newspaper if it published military secrets: “No one would question but that a government might prevent actual obstruction to its recruiting service or the publication of the sailing dates of transports or the number and location of troops.”

Nevertheless, the government must provide proof that national security interests really are in play—that is, the government cannot simply use national security as a blank check to sidestep constitutional challenges. In New York Times Co. v. United States (1971), the majority of the Court rejected the government’s national security justifications for attempting to prevent the New York Times and the Washington Post from publishing the Pentagon Papers, the top-secret history of the U.S. involvement in the Vietnam War. In his concurring opinion, Justice Hugo L. Black explained that “the word ‘security’ is a broad, vague generality whose contours should not be invoked to abrogate the fundamental law embodied in the First Amendment.”

The War on Terror that commenced after the September 11 attacks on the United States brought into focus the debate over national security and the proper balance between liberty and security. One controversy arose over certain provisions of the USA Patriot Act, which Congress passed forty-five days after the attacks, especially the widespread use by the Federal Bureau of Investigation (FBI) of national security letters (NSLs) under Section 505 of the act.

A national security letter is an administrative subpoena instrument used by the FBI to compel recipients of the letter to comply with requests for various data and records on the person who is the subject of the subpoena. This instrument requires no probable cause or judicial oversight. It also contains a gag order preventing recipients from even acknowledging they have received an NSL. A 2007 Department of Justice audit revealed that in 2005, 47,221 requests applicable to 18,000 people were issued. Similar numbers were posted for 2003 and 2004.

“Secret evidence” is another questionable instrument sometimes favored by the government, especially in immigration cases. In 2003 Sami al-Arian, a tenured professor of computer engineering at the University of South Florida, was arrested, based on secret evidence, for his alleged ties to the Palestinian Islamic Jihad. The al-Arian case caused an uproar within academia because of its free speech and free association implications as well as his termination from his academic posting.

Despite the credible nature of the charges against him, several prominent academicians came to al-Arian’s defense, demanding an inquiry and reinstatement. Al-Arian was charged with seventeen separate counts, but as part of a plea agreement, he was convicted on one count of conspiracy and sentenced to nineteen months in jail beyond the fifty seven months already served. Al-Arian admitted that he had raised funds for the Palestinian Islamic Jihad.

Yet another national security issue that continues to generate controversy is the published “outings” of known intelligence operatives. The best-known case is that of career Central Intelligence Agency (CIA) operative Philip Agee.

Agee served in Latin America but became disaffected by the CIA’s role there. He left the agency in 1968, a self-avowed socialist. In the 1970s, Agee published Inside the Company in which he named over 250 operatives and assets for the CIA in Latin America. In 1974 he announced a campaign against the CIA.

The Intelligence Identities Protection Act (IIPA) of 1982 was drafted in the wake of the disclosures made in part by Philip Agee and the assassination of CIA Station Chief Richard Welch by the Greek terrorist group 17 November after his identity was revealed in the magazine Counter-Spy. The IIPA has been invoked twice since its passage: in the 1985 case of CIA operative Sharon Scranage, the only person convicted thus far under the IIPA, and most recently in the Valerie Plame affair.

In 2003 newspaper columnist Robert Novak publicly revealed that Valerie Plame, the wife of Ambassador Joseph Wilson, a vociferous critic of the George W. Bush administration and the prewar intelligence on Iraq, was a nonofficial cover operative of the CIA. Later, I. Lewis “Scooter” Libby, the former chief of staff to Vice President Dick Cheney, was indicted by Special Prosecutor Patrick Fitzgerald under the IIPA for disclosing Plame’s name to journalists, who, in turn, disclosed her identity to the American public. On March 6, 2007, Libby was convicted on four counts of perjury and obstruction of justice. However, in the end he was not convicted under the IIPA.

Ultimately, policy makers are responsible for maintaining the delicate balance between the First Amendment and national security—a balance with which society continues to struggle in an age of international terrorism.