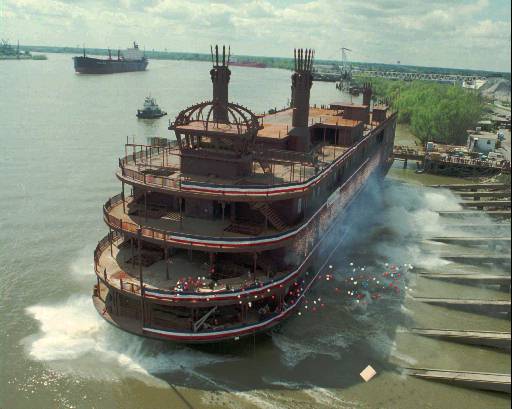 A riverboat casino launches into the Mississippi River in 1995 in New Orleans, Louisiana. The Supreme Court struck down a law prohibiting broadcast advertisements for the casinos in 1999 in Greater New Orleans Broadcasting Association v. United States (1999). (AP Photo/Burt Steel, used with permission from the Associated Press.)

Louisiana had a controversial history of gambling

Gambling has a long and checkered history in Louisiana. The infamous Louisiana Lottery, which operated in the years after the Civil War, was one of the alleged evils that prompted Congress to enact a law suppressing the interstate sale of lottery tickets. The Supreme Court upheld the act in Champion v. Ames (1903).

That decision did not stop Louisiana. In addition to gambling casinos, betting on horse racing, craps, poker, and cockfighting were some other types of gambling long familiar to Louisiana residents. In the 1950s and 1960s, illegal gambling casinos in Jefferson and St. Bernard parishes (counties) in southeast Louisiana became a public scandal. In 1991, Governor Edwin Edwards convinced the state legislature to legalize riverboat casinos in the city of New Orleans and in Jefferson and St. Bernard parishes as a means of revitalizing the state’s economy.

Not long after the riverboats began operating, the Federal Communications Commission (FCC) threatened to sanction the Greater New Orleans Broadcasting Association, a nonprofit trade association of radio and television broadcasters in the New Orleans area, for advertising private casino gambling in Louisiana in violation of Congress’s authority to forbid such broadcasting under 18 U.S.C. section 1304 and the FCC’s authority to regulate them. The issue arose because the broadcast signals carried not only to Mississippi, which allowed casino gambling, but also to parts of Texas and Arkansas, which did not.

The Greater New Orleans Broadcasting Association filed suit in the federal district court against the United States and the FCC, arguing that its advertisements were commercial speech protected by the First Amendment. Using the four-part test in Central Hudson Gas and Electric Corp. v. Public Service Commission (1980), both the district court and the Fifth Circuit Court of Appeals sustained the restrictions.

By the time the case reached the Supreme Court, the Court had ruled in 44 Liquormart, Inc. v. Rhode Island (1996) that advertising liquor prices was protected as commercial speech. It remanded the Louisiana case to the lower courts in light of that ruling, but the lower courts sustained the restrictions.

When the case again reached the Supreme Court, the Court ruled that 18 U.S.C. Sec. 1304 failed to meet the Central Hudson test because it was irreconcilably confusing, prohibiting advertising for some forms of gambling but not others, and because it regulated truthful speech about lawful conduct. The case is among those that repudiated an earlier Supreme Court decision in Posadas de Puerto Rico Associates v. Tourism Company of Puerto Rico (1986).