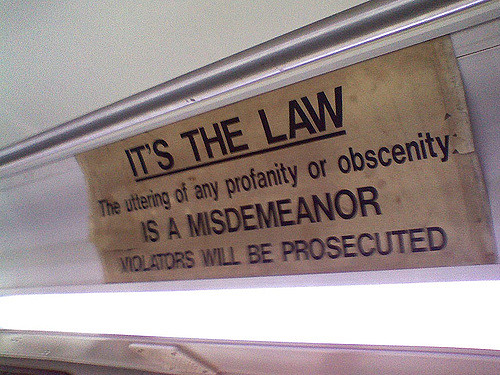 The courts have ruled that profanity can be regulated by government under certain circumstances consistent with the First Amendment. Here, a sign on GRTC Transit System Bus 84 in Richmond, Virginia reminds passengers that uttering profanities or obscenities on buses is prohibited conduct. (Photo by Taber Andrew Bain, Creative Commons by 2.0)

Under modern First Amendment jurisprudence profanity cannot categorically be banned but can be regulated in many situations.

Profanity has historically been considered punishable

Historically, profane words were considered blasphemous and punishable. In 1942, Justice Francis W. Murphy assumed this position in his famous passage from the “fighting words” decision of Chaplinsky v. New Hampshire: “There are certain well-defined and narrowly limited classes of speech, the prevention and punishment of which has never been thought to raise any Constitutional problem. These include the lewd and obscene, the profane, the libelous, and the insulting or ‘fighting’ words.”

Nearly 30 years later the Supreme Court ruled that an individual could not be convicted under a local disturbing the peace law when he wore a jacket bearing the words “Fuck the Draft” into a California courthouse. In Cohen v. California (1971), Justice John Marshall Harlan II reasoned that “while the particular four-letter word being litigated here is perhaps more distasteful than most others of its genre, it is nevertheless often true that one man’s vulgarity is another’s lyric.” Harlan warned that “governments might soon seize upon the censorship of particular words as a convenient guise for banning the expression of unpopular views.” Cohen stands for the principle that profane words, in themselves, cannot be banned under the First Amendment.

At times, profanity is a non-protected speech category

Profanity can be regulated, however, under certain circumstances consistent with the First Amendment. Profane rants that cross the line into direct face-to-face personal insults or fighting words are not protected by the First Amendment. Similarly, Watts v. United States (1969) established that profanity spoken as part of a true threat does not receive constitutional protection. Likewise, under Bethel School District No. 403 v. Fraser (1986), public school officials can punish students for profane speech. The government can also regulate profanity that qualifies as indecent speech in the broadcast medium, as the Supreme Court explained in Federal Communications Commission v. Pacifica Foundation (1978).

Some states still have laws on the books that criminalize the speaking of profanity. For example, Michigan until December 2015 had a statute that read: “Any person who shall use any indecent, immoral, obscene, vulgar or insulting language in the presence or hearing of any woman or child shall be guilty of a misdemeanor.” A state appeals court determined the law unconstitutionally vague in the case of a cussing canoeist in People v. Boomer (Mich. App. 2002). The law was repealed in 2015.

North Carolina has a law on its book that prohibits cursing on public highways. The statute provides: “If any person shall, on any public road or highway and in the hearing of two or more persons, in a loud and boisterous manner, use indecent or profane language, he shall be guilty of a Class 3 misdemeanor.”

In 2016, the 4th U.S. Circuit Court of Appeals upheld a South Carolina law that prohibited profanity near a church or school. In the case, Johnson v. Quattlebaum, the appeals court determined that the law was not too broad or vague, because it only prohibited unprotected fighting words and only applied to speech that was within hearing distance.