By Carrie Archie Russell
Other articles in Groups and Organizations 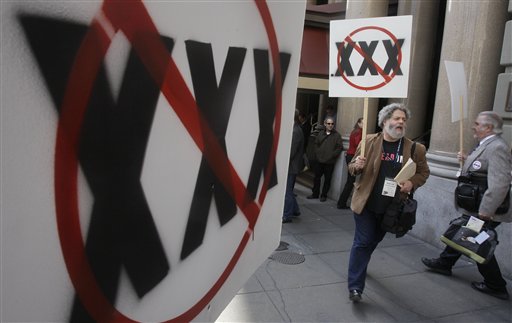 The Adult Film Association of America was the first trade association of pornographic film producers and sought to protect the First Amendment rights of those in the pornographic film industry. The role of the Adult Film Association was later taken over by what became the Free Speech Association. In this 2011 photo, Attorney Reed Lee, a board member for the Free Speech Coalition protests in San Francisco. Members of the adult entertainment industry were opposed to a plan to create a separate Internet address for porn websites. The plan proceeded in December 2011. (AP Photo, used with permission from The Associated Press.)

Founded in 1969 as the first trade association of pornographic film producers, the Adult Film Association of America sought to limit the reach of government with regard to content censorship, defend those employed in the pornographic film industry from prosecution for obscenity or solicitation, and finance defense counsel and the filing of amicus curiae briefs at the state and federal court level in support of adult film industry defendants.

The association added to its notoriety by holding an annual adult film awards for industry participants.

At the time of the association’s inception, adult entertainment was primarily available in permit-bearing, adult-only theaters. With the advent of inexpensive home videos, the adult entertainment industry experienced a sea change. The association sought to expand its professional jurisdiction accordingly, and in the early 1970s changed its name to the Adult Film and Video Association of America (AFVAA).

Galvanized in 1988 by efforts of the State of California to prosecute video producer Harold Freeman for the rarely recognized crime of “pandering,” the AFVAA financed Freeman’s defense and countered the state’s assertion that “paying performers to have sex in a film was an act of prostitution.”

In 1988 in The People v. Freeman, the California Supreme Court (sitting en banc) reversed the decisions of the trial court and the court of appeals, finding that

The AFVAA’s role as the trade representative for the adult entertainment industry was taken over initially by the Free Speech Legal Defense Fund (FSLDF), which in 1992 became the Free Speech Coalition. The coalition acknowledges the AFVAA as its ideological predecessor and accordingly states as its goal the opposition of efforts to pass and enforce censorship and obscenity laws within the United States.

In 1997, the Free Speech Coalition retained a California lobbyist to represent its legislative interests in the state.