By Paul J. Cornish
Other articles in Presidents 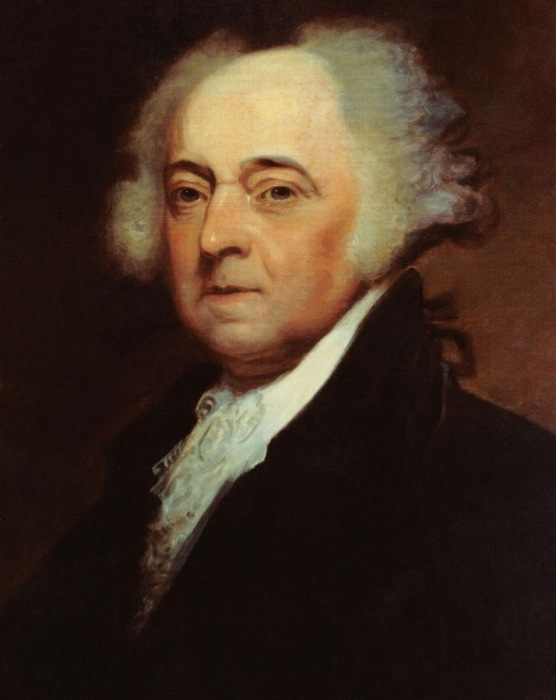 John Adams (1735–1826), who served as the first vice president of the United States and then as its second President, also influenced the development of constitutional government through his political writings and thought. He was supportive of many First Amendment principles although he did believe in established churches. (Image via the Naval Historical Center, painted by Asher Brown Durand, public domain)

John Adams (1735–1826), who served as the first vice president of the United States and then as its second President, also influenced the development of constitutional government through his political writings and thought.

Adams was a leading lawyer and advocate for independence

Born in Massachusetts Bay Colony, Adams received his education from Harvard and became a leading lawyer in Massachusetts during the colonial era. In his most famous case, he defended British soldiers who stood trial after the Boston Massacre in 1770. The leading advocate for independence at the Second Continental Congress and a member of the committee that drafted the Declaration of Independence, Adams served the United States during the Revolutionary War as an ambassador to the Court of Louis XVI in Paris and as ambassador to the Netherlands.

Adams advocated separation of powers and checks and balances

Adams was serving as an ambassador in London during the Constitutional Convention of 1787, so he did not have a direct impact on the drafting of the Constitution. Adams, however, had become a prominent advocate of separation of powers and of checks and balances to protect against the power of absolute government. His political writings, including Thoughts on Government (1776) and A Defense of the Constitutions of the United States of America (1778), developed the principles of constitutional government that James Madison and other delegates applied at the 1787 convention. Adams strongly supported the new constitution.

After U.S. independence, Adams returned to his role as a diplomat at the Court of St. James’s in London, from 1785 to 1788, before being elected vice president in 1788 and president in 1796.

His presidency (1797–1801) was a tragic episode. As a leader among the Federalists, Adams became the subject of scurrilous attacks in Republican newspapers and pamphlets, which portrayed him as a monarchist and an enemy of republican government. They also ridiculed him as being effeminate or a hermaphrodite because of his height and high-pitched voice.

Meanwhile, the United States came under pressure from France and Great Britain to take sides in the wars following the French Revolution of 1789. Republicans favored republican France, while the Federalists sympathized with Great Britain. Adams labored to keep the United States out of the great power conflict.

After the XYZ Affair of 1797–1798 caused resentment toward France, Adams and the Federalist majority in Congress sponsored four laws that came to be known as the Alien and Sedition Acts of 1798. These statutes — the Naturalization Act, Alien Act, Alien Enemies Act, and Sedition Act — represent the first instance of an American president placing national security issues and personal reputation before the principles of freedom of speech and of the press.

The laws met with immediate resistance in Republican strongholds and triggered the Virginia Resolution (1798) and the Kentucky Resolution (1799). Authored by James Madison and Thomas Jefferson, the resolutions questioned the constitutional validity of the legislation. The unpopularity of the measures almost certainly contributed to Adams’s defeat by Jefferson in the presidential elections of 1800.

Though a leading Federalist, Adams makes clear in letters to Jefferson that he would have preferred that the Constitution be prefaced by a “declaration of rights,” as was the Massachusetts constitution (1780), for which Adams served as primary author. Adams was serving as vice president when the first Congress proposed and adopted the Bill of Rights. Adams’s political writings and correspondence with Jefferson, Benjamin Rush, and other leading figures of the American founding illustrate his support of the principles of religious liberty and republicanism embodied in the First Amendment.

The one exception is Adams’s backing of an established church and his belief that religious establishment need not be subversive of religious freedom. Later in life, his views on religion and politics moved closer to those of Jefferson. Both men espoused Enlightenment attitudes and Unitarian doctrine, but unlike Jefferson, however, Adams was never sanguine that human enlightenment would lead to the end of religious intolerance and oppression. He believed that people acted based on the principle of “might makes right” because power always sees itself as being in the right. Governmental checks and balances consequently might be the only defense against religiously motivated tyranny.

Adams and Jefferson died on the same day, July 4, 1826, the fiftieth anniversary of the Declaration of Independence, to which both men had contributed.