By Sekou Franklin
Other articles in Groups and Organizations 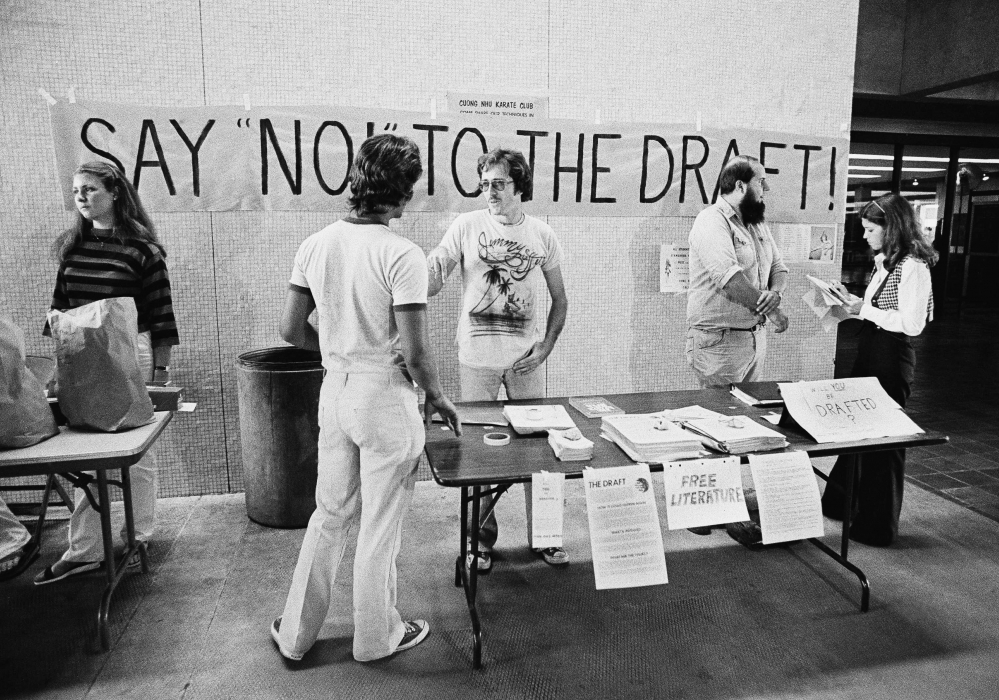 Students gather around a table on March 14, 1979 at a Miami community college where anti-draft literature is available. Coast Guard veteran Joe Murphy (ctr) and American Friends Service Committee member Warren Hoskins (R) attempted to gain support for their anti-draft cause with several hundred leaflets. They confessed though that student response was lukewarm at best. (AP Photo/Willens)

The American Friends Service Committee (AFSC) is an international social justice organization with a mission based on Quaker philosophy. Founded in 1917 after the United States entered World War I, AFSC initially mobilized conscientious objectors and anti-war activists to support relief and reconstruction initiatives that served poor communities and war-torn countries.

In the late 1930s, before the start of World War II, AFSC assisted victims of the Nazis. A strong advocate of nonviolence, AFSC was awarded the Nobel Peace Prize in 1947.

The beginning of the Cold War marked a significant period for AFSC. As anti-communist hysteria gained steam, AFSC intensified its political activism and expressed its disagreement with the United States’ containment policy. Instead, it called for a de-escalation of tensions between the United States and the Soviet Union, a position that it maintained throughout the cold war.

AFSC’s nonaligned stance led to government scrutiny and surveillance of itself and similarly positioned groups for allegedly being communist sympathizers.

During the Vietnam War, AFSC was involved in a First Amendment case dealing with leafleting on a military base. In Flower v. United States (1972), the Court overturned the conviction of a member of AFSC who had been barred from advertising a meeting about the Vietnam War on a military base. The Court said that because the base commander had not restricted general access to the base, he could not restrict leafleting on the base.

With the blacklisting of suspected communists and AFSC’s experience during the Cold War, the organization became a vocal proponent of First Amendment protections, especially the right of association and freedom of speech.

Through the work of executive secretary Clarence Pickett, AFSC and several other groups formed the National Committee to Abolish the House Un-American Activities Committee, which had been created in 1938 and targeted, among others, anti-war groups and, later, peace activists who disagreed with U.S. Cold War policy.

From the 1940s on, AFSC advocated civil rights and civil liberties protections for an assortment of groups, including prisoners, interned Japanese and Japanese Americans, civil rights activists, and resident and nonimmigrant aliens.

AFSC challenged law allowing for deportations without due process

AFSC joined the American-Arab Anti-Discrimination Committee and a myriad of other organizations in challenging the Immigration and Nationality Act of 1952, also known as the McCarran-Walter Act. The law allowed for the deportation of alien residents without providing them due process if they were suspected of being members of a communist organization or engaged in subversive activities.

The case, American-Arab Anti-Discrimination Committee v. Meese (C.D. Cal. 1989), stems from the 1987 arrests of eight members of the Popular Front for the Liberation of Palestine (PFLP). The U.S. government began deportation procedures against the eight after their arrest on the grounds of associating with a subversive organization.

The plaintiffs argued that the McCarran-Walter Act had been selectively enforced against the PFLP members and violated their First and Fifth Amendment protections of freedom of expression and due process. District and appellate courts ruled in their favor, and a year later, Congress repealed the act.

A decade later, however, in Reno v. American-Arab Anti-Discrimination Committee (1999), the Supreme Court issued an 8-1 decision allowing the attorney general to begin deportation proceedings against subversive, alien individuals and groups without the oversight of the federal courts. Civil libertarians objected, arguing that removing federal court jurisdiction would prevent the aforementioned groups from having their civil liberties safeguarded by judicial review.

AFSC had challenged a provision of the Immigration Reform and Control Act (IRCA) of 1986, which mandated that employers certify the citizenship or legal status of prospective employees as a condition of employment. AFSC contended that the First Amendment’s right to freedom of religion exempted it, as a Quaker-oriented organization, from this provision. It argued that much of its work, which includes international activities, was rooted in Quaker principles, which required it to welcome aliens.

The Ninth Circuit Court of Appeals disagreed, stating that the IRCA was not purposefully designed to curtail religious freedoms.

AFSC has been a staunch opponent of recent attempts by government to restrict the right of association and other civil liberties. In the 1990s, it helped to establish the Bill of Rights Alliance, a coalition of mostly liberal organizations to lobby against congressional attempts to restrict civil liberties.

In American Friends Service Committee v. Department of Defense (3d Cir. 1987), it used the Freedom of Information Act (FOIA) to investigate civil liberties violations by attempting to force the Department of Defense to disclose unclassified documents. The courts ruled against AFSC in this instance.

Shortly after the September 11, 2001, al-Qaida attacks, AFSC filed a FOIA request to determine whether the Department of Defense’s Threat and Local Observation Notice (TALON) database — created as part of George W. Bush’s “war on terrorism” — had illegally monitored antiwar and social justice organizations. (The Pentagon announced the closure of the TALON program in 2007.)

Headquartered in Philadelphia, AFSC remains one of the most influential social justice organizations.