By Robert A. Kahn
Other articles in Categories of Laws and Proposed Laws 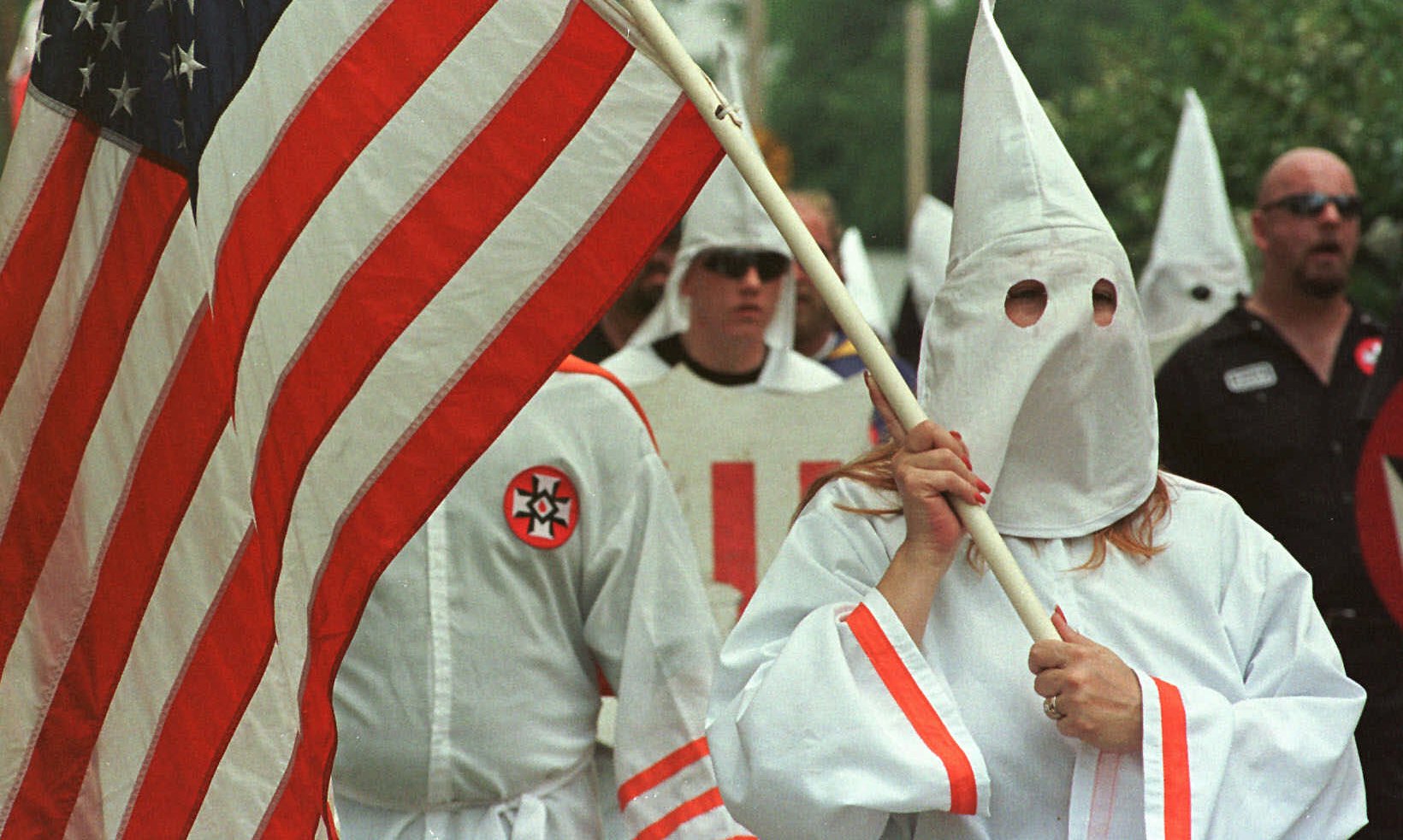 Members of the Church of the American Knights of the Ku Klux Klan march around the Madison County Courthouse in Canton, Miss. Klan members argued that if their masks were removed they would face harassment. Opponents contended that most anti-mask laws violate the equal protection clause because they make exceptions for Halloween masks, masquerade ball masks, and masks worn for medical reasons, but not masks for political acts. (AP Photo/Rogelio Solis, used with permission from The Associated Press)

The earliest laws banning masked demonstrations date back to the antebellum era. In 1845 New York made it illegal to appear “disguised and armed.” Most anti-mask laws were passed, however, in response to the Ku Klux Klan, whose members used masks to hide their identities as they terrorized their victims.

Around 15 states have anti-mask laws

Around 15 states have anti-mask laws, as do many counties and municipalities. Most anti-mask laws do not target specific groups explicitly. Instead, they use neutral language, typically banning mask wearing that intimidates others.

Supporters of such laws argue that wearing masks emboldens people to commit crimes and makes those crimes more frightening to the victims.

First, they invoke freedom of association, claiming that mask laws deprive wearers of the anonymity needed to express their views. They rely on NAACP v. Alabama (1958), which held that because its members feared harassment from opponents of civil rights, the NAACP did not have to reveal its membership list unless Alabama could supply a compelling state interest.

Klan members argued that if their masks were removed, they would face harassment. The Klan’s unpopularity added fuel to this argument. For example, in American Knights of the Ku Klux Klan v. City of Goshen (N.D. Ind. 1999), a court found that Klan members had indeed suffered harassment, through vandalism and bomb threats, and ultimately invalidated the city’s anti-mask law.

The Second Circuit Court of Appeals, in Church of the American Knights of the Ku Klux Klan v. Kerik (2d Cir. 2004), held that harassment of Klan members was irrelevant because the Constitution guarantees only the right to speak, not the conditions under which one speaks. Furthermore, in most cases involving the Klan, courts held that protecting citizens from intimidation was a compelling state interest.

Anarchists convicted under New York’s anti-mask law failed, however, to raise a constitutional claim in People v. Aboaf (Crim. Ct. 2001) because they could not show any harassment beyond famous anarchists having been persecuted in the past.

In Klan cases, courts held that the masks added little to the expressive content of the rest of the Klan regalia. They also ruled that the state’s concerns about safety and avoiding intimidation easily satisfied the substantial state interest test for symbolic speech cases.

Third, opponents contended that most anti-mask laws violate the equal protection clause because they make exceptions for Halloween masks, masquerade ball masks, and masks worn for medical reasons, but not masks for political acts.

These arguments convinced the California court in Ghafari but not the Georgia Supreme Court in State v. Miller (S.E. 2d 1990), which defended Georgia’s exemptions as distinguishing between threatening and nonthreatening masks.

Overall the general trend has been toward upholding anti-mask laws, at least where mask wearers cannot show direct, specific evidence of harassment.