By John H. Matheson
Other articles in Categories of Laws and Proposed Laws 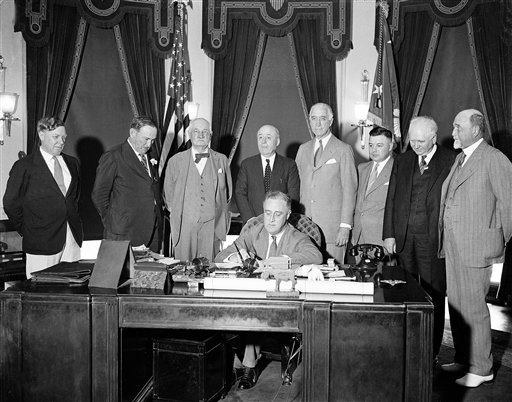 Blue sky laws refers to each state’s set of securities laws and regulations. Every state, plus the District of Columbia, Guam, Puerto Rico, and the U.S. Virgin Islands, has its own securities laws. From 1911 to 1933, blue sky laws served as the exclusive means by which to regulate securities offers, sales, and distributions in the state. The federal government entered its involvement with the Securities Act of 1933. In this photo, President Franklin D. Roosevelt signs the Act, May 27, 1933. The Supreme Court has said that states can regulate speech to prevent securities fraud. (AP Photo, used with permission from the Associated Press)

Blue sky laws refers to each state’s set of securities laws and regulations. Every state, plus the District of Columbia, Guam, Puerto Rico, and the U.S. Virgin Islands, has its own securities laws.

Although these laws vary from state to state, they generally regulate the offer and sale of equity and debt investment instruments (securities) and license brokerage houses, brokers, and investment advisers. The laws were created to protect the public from investing in fraudulent companies and to combat abuses in securities markets.

The origin of the term blue sky laws is not clear, but Supreme Court justice Joseph McKenna, in Hall v. Geiger-Jones Co. (1917), is the first person known to use the phrase. Referring to an Ohio statute that sought to prohibit the sale of shares in companies engaged in illegitimate dealings, he wrote, “The name that is given to the law indicates the evil at which it is aimed, that is, to use the language of a cited case, ‘speculative schemes which have no more basis than so many feet of blue sky’; or, as stated by counsel in another case, ‘to stop the sale of stock in fly-by-night concerns, visionary oil wells, distant gold mines and other like fraudulent exploitations.’”

Hall v. Geiger-Jones Co. and its companion cases became known as the Blue Sky Cases. It is not clear to what “cited case” Justice McKenna is referring.

Kansas in 1911 became the first state to adopt blue sky laws. From 1911 to 1933, blue sky laws served as the exclusive means by which to regulate securities offers, sales, and distributions in the state. The federal government entered its involvement with the Securities Act of 1933. State securities laws periodically have been subject to constitutional challenge.

In the blue sky cases mentioned above, certain state laws were challenged as a violation of the 14th Amendment’s prohibitions that “no person shall be deprived of his life, liberty, or property without due process of law, or denied the equal protection of the laws.” The Supreme Court found that the laws at issue could be adopted and enforced pursuant to proper exercise of the police power of the state.

The Supreme Court in Ohralik v. Ohio State Bar Association (1978) ruled similarly that a lawyer’s solicitation of clients could be restricted by the state if doing so protects the public from harm. On First Amendment concerns regarding communications, the Court noted, “[T]he State does not lose its power to regulate commercial activity deemed harmful to the public whenever speech is a component of that activity. Neither Virginia Pharmacy nor Bates purported to cast doubt on the permissibility of these kinds of commercial regulation.”

By the mid-2000s, the majority of states’ blue sky laws were modeled after the Uniform Securities Act of 1956. This legislation required the registration of brokers and dealers in securities and of securities offerings and contained prohibitions against unlawful and fraudulent acts. Although most states utilized the Uniform Securities Act in formulating their respective blue sky laws, they were not required to follow it. The result was a federal law with no national standard.

In response to this problem, Congress issued the National Securities Markets Improvement Act of 1996 (NSMIA) to uniformly regulate particular national securities offerings. Through the NSMIA, Congress partially preempted states’ securities laws and reduced their jurisdiction. If a securities offering falls within the class of securities called federally covered securities, issuers are substantially exempted from state blue sky law regulation and must instead satisfy federal requirements.

States do retain certain powers under the NSMIA, the most important of which is the ability to investigate and seek enforcement against fraudulent conduct in connection with securities activities.