By Judith Haydel
Other articles in Groups and Organizations 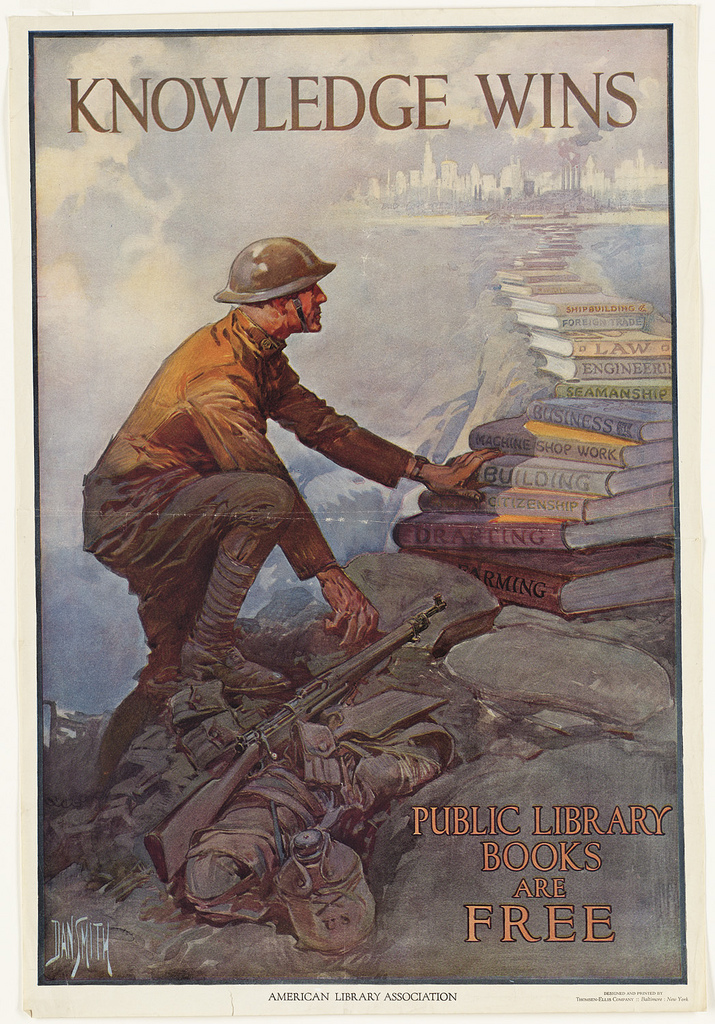 The American Library Association (ALA) supports the First Amendment rights of freedom of speech and press as they pertain to libraries, librarians, and library patrons. This ALA poster by Dan Smith in 1918 uses an image of a soldier climbing a bridge of books to a city in the distance to promote the importance of reading and education. (Image via Library Company of Philadelphia on Flickr, public domain)

The American Library Association (ALA) supports the First Amendment rights of freedom of speech and press as they pertain to libraries, librarians, and library patrons.

Its mission is to enhance learning and ensure free access to information by providing leadership to librarians and the library community.

ALA promotes intellectual freedom through access to wide variety of material

Established in Philadelphia in 1876 and now headquartered in Chicago, the ALA has promulgated numerous statements and policies articulating its position on intellectual freedom. The Library Bill of Rights affirms the association’s view that libraries are “forums for information and ideas.”

The ALA’s Freedom to Read Statement recognizes the freedom to read as an essential part of the U.S. Constitution and asserts that free and open communication is vital to a democratic society.

It is in the public interest for publishers and librarians to make available the widest range of material from a variety of viewpoints. They should not prevent access to information because of the background or views of an author, nor should they tolerate government, group, or individual attempts to reduce or deny access to public information.

ALA is involved in First Amendment causes

Its Intellectual Freedom Manual addresses practical issues confronting librarians in applying intellectual freedom principles. The ALA established (in 1945) an office in Washington, D.C., to track legislation of interest to the library community.

It also maintains a website to help librarians stay abreast of legislative activities and to provide information about legislation involving library-related issues.

It created the tax-exempt Freedom to Read Foundation in 1969 to help support and defend librarians who resist censorship and other challenges to First Amendment rights.

Along with other organizations, the ALA co-sponsors the American Booksellers Foundation for Free Expression and Banned Books Week, a national celebration of the freedom to read and an opportunity to educate the public about First Amendment rights.

ALA has been involved in First Amendment litigation

The ALA consistently has challenged numerous laws that it contends infringe on the First Amendment right of free expression. It questioned the provisions of the Communications Decency Act, which led to the Supreme Court’s landmark decision in Reno v. American Civil Liberties Union (1997) declaring that provisions of the act designed to protect minors were unconstitutionally over broad.

More recently, the ALA has opposed congressional efforts that it contends violate the First Amendment rights of library patrons who have a legitimate right to access material that may be inappropriate for or harmful to certain minors.

In early 2007, the Senate and the House of Representatives introduced the Deleting Online Predators Act (DOPA), which if enacted would require schools and libraries to block access to commercial social networking websites and chat rooms to protect minors from sexual predators. The ALA opposes the legislation on the grounds that its language is overly broad and unclear and thus would block access to many websites and interactive web applications of value to library patrons.

In United States v. American Library Association (2003), the ALA unsuccessfully challenged the Children’s Internet Protection Act, which requires libraries that receive federal funds for Internet access to install filters on library computers to continue to receive funding. (Adults can request that the filters be turned off.)

ALA concerned about FBI's power to demand library records

The association also opposes congressional efforts to protect national security in ways that violate the privacy and First Amendment rights of librarians and library patrons.

It has called into question section 2709 of the USA Patriot Act, which allows the Federal Bureau of Investigation to issue so-called national security letters, which in the case of libraries secretly demands that they turn over patrons’ library records.

The ALA and the Freedom to Read Foundation filed amicus briefs in Doe v. Gonzales (2005), involving a challenge to a national security letter issued to Connecticut librarians.

Although the case was resolved in the librarians’ favor and section 2709 amended, the ALA argues that the provision still poses a threat to First Amendment and privacy rights.