By David L. Hudson Jr. (Updated December 2017)
Other articles in Groups and Organizations 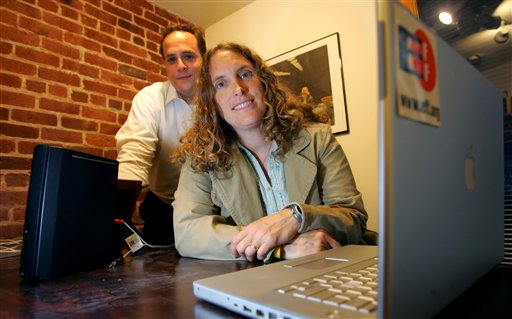 In this photo, Shari Steele, Electronic Frontier Foundation's executive director, center, and Kevin Bankston, staff attorney, are photographed at their office building in San Francisco in 2006. EFF advocates for First Amendment rights in the area of digital and other new technologies. (AP Photo/Jeff Chiu, used with permission from the Associated Press)

The Electronic Frontier Foundation (EFF) was founded in 1990 by Mitchell Kapor and John Perry Barlow as a San Francisco–based civil liberties group that advocates for First Amendment rights in the area of digital and other new technologies.

The EFF supports free speech on the Internet, seeks the protection of encryption technologies, and defends the rights of online journalists and bloggers.

The EFF was one of many civil-liberties groups that challenged the constitutionality of the Internet indecency provisions of the Communications Decency Act of 1996, which resulted in the victory before the Supreme Court in Reno v. American Civil Liberties Union (1997).

The EFF supported the ACLU again in a challenge to the constitutionality of the Child Online Protection Act of 1998, which resulted in successful litigation before the Supreme Court in Ashcroft v. American Civil Liberties Union (2004).

The EFF also represented one of the challengers to the Internet filtering law — the Children’s Internet Protection Act of 2000 — that was upheld by the Supreme Court in United States v. American Library Association (2003).

In more recent years, the EFF continues to be active in filing amicus briefs in First Amendment litigation that reaches the U.S. Supreme Court.

EFF filed an amicus brief in Matal v. Tam (2017), the decision in which the Court invalidated a federal trademark provision banning offensive and disparaging marks.

In 2017, the U.S. Supreme Court cited the EFF’s amicus brief in Packingham v. North Carolina, a decision in which the Court invalidated the constitutionality of a North Carolina law that banned sex offenders from using social media.