By Martin Gruberg
Other articles in Groups and Organizations 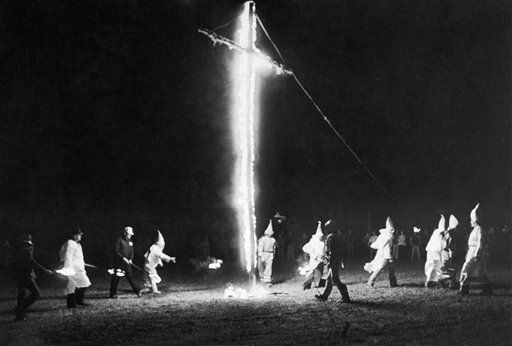 Behind a mask of chivalry, the Ku Klux Klan (KKK), a fraternal organization founded in the South in the post–Civil War period, sought to perpetuate white supremacy through terror. Although some Supreme Court decisions have allowed prosecution of the Klan for terrorist activity, others have affirmed the First Amendment rights of Klan members. About 175 people gathered on a farm near Eastern Maryland town for a Ku Klux Klan rally and cross-burning, Saturday, Nov. 7, 1981. (AP Photo, used with permission from The Associated Press.)

Behind a mask of chivalry, the Ku Klux Klan (KKK), a fraternal organization founded in the South in the post–Civil War period, sought to perpetuate white supremacy through terror. Although some Supreme Court decisions have allowed prosecution of the Klan for terrorist activity, others have affirmed the First Amendment rights of Klan members.

Klan organized as a social club, evolved into a secret organization of lawlessness

The first Klan was organized in May 1866 by a group of young Confederate veterans as a prankish social club. Soon, however, it evolved into a secret organization seeking to enable southern whites to reassert their political and social supremacy against Radical Reconstruction. Confederate general Nathan Bedford Forrest was its first leader.

During its first incarnation, the KKK intimidated blacks, carpetbaggers (migrants from the North), and scalawags (southern collaborators). Flogging, mutilation, lynching, and other acts of violence and lawlessness were employed to intimidate blacks and keep them from voting. Indeed, the early Klan committed more crimes than its twentieth-century successors combined. Largely rural, the organization paralyzed the normal law enforcement process.

Klan was disbanded but did not die

Although Forrest formally disbanded the KKK in 1869, it did not die. In response, Congress passed a Force Act in 1870 and in 1871 and the Ku Klux Klan Act in 1871, authorizing the president to suspend the writ of habeas corpus, suppress disturbances by force, and impose heavy penalties on terrorist organizations. Federal troops were sent into some areas to combat Klan activity. Nine South Carolina counties suspended habeas corpus, and federal agents arrested hundreds of southerners for conspiracy against the national government.

As whites regained political power, the activities of the Klan declined. In 1882 in United States v. Harris, the Supreme Court declared a section of the KKK Act inapplicable to the acts of private persons and thus unconstitutional.

In 1915 at a ceremony at Stone Mountain, Georgia, the Klan was re-created by a former preacher, “Col.”William J. Simmons, as a patriotic fraternal society. This resurgence followed the release of the sensational movie Birth of a Nation, based on the 1905 novel by Thomas Dixon, The Clansman. The original Klan did not burn crosses; this notion took birth in Dixon’s novel. But Klan leaders did have blown-up titles: Grand Wizard of the Empire, Grand Dragon of the Realm, Grand Titan of the Dominion, and Grand Cyclops of the Den.

In the early 1920s, an era of economic dislocation, the Klan spread nationwide. With a membership of between two and four million members, it held political power in Indiana, Oklahoma, and Oregon, as well as in the old South, and it helped to elect U.S. senators and governors. The Klan appealed to white, native-born Protestants who were very patriotic and fearful of immigrants, radicals, Jews and Catholics, and labor unions.

In 1924 the National Democratic Convention defeated a motion denouncing the Klan after a bitter party platform controversy. In the mid-1920s, inept and exploitive leadership, internal conflict, and alleged immorality and violence damaged the Klan’s reputation. The 1930s found the KKK anti-Jewish and anti-Communist. In 1940 the Klan joined with the German-American Bund in holding a large rally in New Jersey. The organization formally disbanded in 1944 when it was unable to pay back federal taxes.

A third Klan movement emerged in 1946, after World War II, based on fear of Communism and the civil rights movement. Samuel Green, an Atlanta physician, headed the revival. However, the group was a shadow of its earlier incarnations. Membership peaked in the 1960s at about 17,000.

The new Klan offered hard-core opposition to the civil rights movement. It was behind the bombing of a black church in Birmingham, Alabama, in 1963, the murder of three civil rights workers in Mississippi in 1964, and the murder of Viola Liuzzo, a voting rights volunteer from the North, in 1965. The passage of civil rights laws and surveillance by the Federal Bureau of Investigation led to a further decline in membership.

In the 1970s, the Klan sought respectability by accepting women members and setting up youth groups. It largely abandoned its opposition to Roman Catholics. Some Klan leaders even ran for public office in the South. David Duke, a former Grand Wizard, was elected to the Louisiana House of Representatives in 1989 and ran unsuccessfully for governor as a Republican in 1991.

Klan activity has been at the heart of First Amendment cases

The Klan and Klan activity have been at the heart of many First Amendment cases. Demonstrations (and counter-demonstrations) and racially provocative statements by Klansmen have often produced controversy. In overturning the conviction of a Klansman in Brandenburg v. Ohio (1969), the Supreme Court established that states could only suppress subversive speech that is “directed to inciting or producing imminent lawless action and is likely to incite or produce such action.” In Capitol Square Review and Advisory Board v. Pinette (1995), the Court upheld the right of the Klan to display a Latin cross on state capitol grounds. In R.A.V. v. St. Paul (1992), the Supreme Court struck down a hate speech law that had been applied to youth who had burned a cross on a lawn, ruling that the law contained a form of viewpoint discrimination prohibited by the First Amendment. However, in Virginia v. Black (2003) the Court ruled that the First Amendment did not prohibit laws that penalized individuals who burned crosses with the intent of intimidating others.