People for the American Way

By James T. Gibson
Other articles in Groups and Organizations 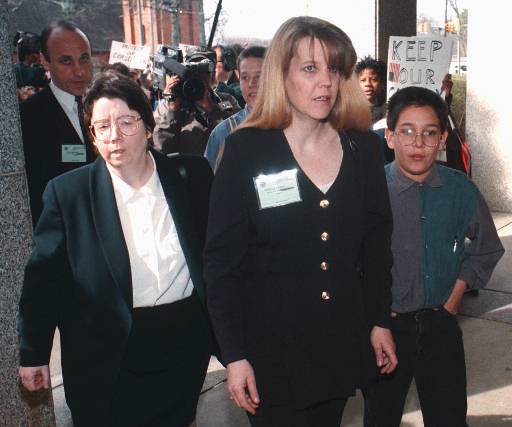 People for the American way is a progressive public interest organization that has advocated for many issues, including First Amendment rights link in the case pictured here. Lisa Herdahl, center, enters federal court in Oxford, Mississippi in 1996 with Judith Schaefer, left, an attorney for the PFAW. Herdahl sued the North Pontotoc, Mississippi, School District to prevent it from using its intercom system for the broadcast of morning prayers. U.S. District Judge Neal Biggers ordered an end to the tradition. (AP Photo/Bruce Newman, used with permission from the Associated Press)

PFAW lobbies at the local, state, and national levels for such causes as protection of abortion rights, expanded civil rights laws, and increased voter registration.

People for the American Way has advocated for First Amendment freedoms

It has focused a great deal of its political and financial capital on First Amendment advocacy in the areas of religious freedom and freedom of expression. PFAW frequently files or signs on to amicus briefs in First Amendment cases before the Supreme Court.

PFAW was founded in 1981 by the television director, writer, and producer Norman Lear to combat what was then, according to PFAW, “a new and disturbing political movement in America” — the rise of the religious right.

Early efforts included a series of television commercials featuring celebrities, among them Goldie Hawn and Muhammad Ali, advocating a message of “respect for individual liberty, celebration of diversity, love of country, and of the democratic institutions at its core.”

PFAW is most known for its opposition to Republican judiciary nominations

Perhaps PFAW’s most prominent role in the public policy arena has been its efforts to shape the selection of the federal judiciary, typically opposing Republican appointments and supporting Democratic ones.

PFAW first entered the fray in 1987 as a vocal opponent of Judge Robert Bork, one of President Ronald Reagan’s nominees to the Supreme Court, and in 1991 against Judge Clarence Thomas, named to the Court by President George H. W. Bush. Bork was rejected; Thomas was confirmed.